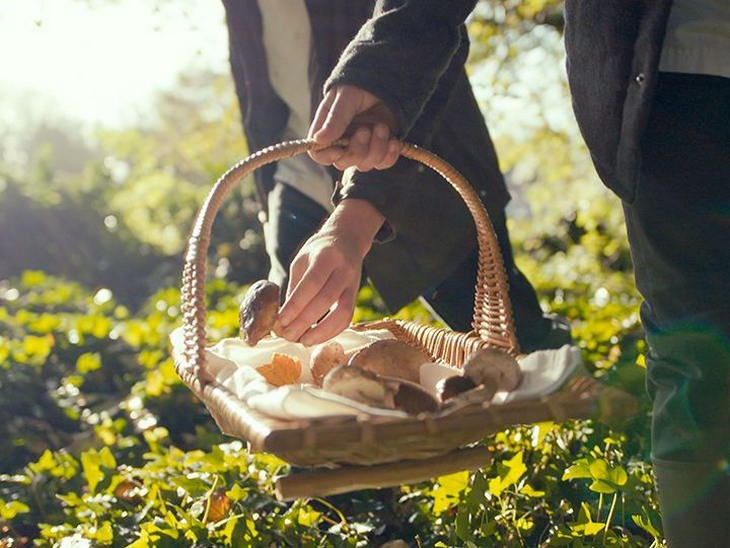 Imagine Gordon Ramsay presiding over the kitchen in the evening then getting up early next morning to muck out the pigs and weed the vegetable beds. Never mind Ramsay, it’s an implausible scenario for any head chef but things are done differently at Abbot’s Court, a seven-bedroom country house in Dorset.

For a start, the restaurant has two head chefs, Mike Parry and Alex Naik, a rare example of a job-share in the notoriously ego-driven world of high-end cooking. And that’s it: no sous chef, no pastry chef. Mike and Alex do everything. This includes foraging in the surrounding woodland, growing produce in the walled kitchen garden and helping with the chickens and pigs (which are destined for charcuterie).

Jez and Niki Barfoot came up with the idea of a largely self-sufficient hotel while running a restaurant, the Tickled Pig, in Wimborne. A friend tipped them off about the derelict Abbots Court, with its five acres of overgrown grounds on the Drax estate in nearby Winterborne Kingston, and after several months of restoration they opened in January. A “living wall” made from felled trees shows how many invasive species they had to cut down to create the tranquil garden in front of the house.

The Domesday Book records a farm on the site, while the current building is a grand Victorian farmhouse. It is not exactly a hotel – there is no reception or room service – but to call it a B&B would be to sell it short. It is one of those modish boutique retreats that aims for a “staying with friends in the country” vibe. It works; it feels luxurious but unstuffy.

The renovation was sponsored by Farrow and Ball and the whole place is a look-book of the latest paint and wallpaper trends – complete with discreet cards naming the shades and styles for guests to get the look at home. There is a lounge (shade: London Stone), a bar (Inchyra Blue) and a 14-seat restaurant (Eating Room Red) downstairs, with all the bedrooms upstairs. The Barfoots have restored the original floor tiles, wooden shutters and fireplaces, which have log fires in winter (it was gloriously sunny when we stayed). Vanity Fair caricatures strike a pose on the walls.

Rooms are named after rare-breed pigs. Tamworth (wallpaper: Feather Grass) was enormous, with dual-aspect windows giving far-reaching views over yellow fields of rapeseed. The bathroom (Down Pipe) didn’t have a bath but did have lovely British-made Bramley products.

OK, it is a walking advert for a paint company but it’s tastefully done and there is a connection: Farrow and Ball was founded in Dorset in 1946 and its paints and wallpapers are still made near Wimborne, with designs inspired by the local countryside.

We had a pre-dinner drink in the fairy-light festooned bar. The sommelier, Helen Winnett, matched Dorset-distilled Conker and Lilliput gins with tonics, and paired our food and drinks at dinner, too. She had a refreshingly free-spirited approach, mixing traditional wine pairings with the odd sherry, amaretto and even vodka.

Jez, himself a MasterChef quarter-finalist, is aiming for a Michelin star and he has chosen his chefs wisely. We had the tasting menu (£60) and almost everything was exquisite, from the bread (mini cottage loaf with butter and fennel seed salt) to the local cheeses with homemade crackers and fig chutney. It is impossible to choose a favourite course but contenders include a just-picked wild garlic and nettle soup, delicate cured trout and lamb with tarragon.

Dishes read simply, with three-word descriptions (“trout, sorrel, kale”) belying their complexity – the trout was juniper-cured and served with sorrel cheesecake, sorrel sorbet, crispy kale and a savoury crunch. Occasionally there was too much going on: pigeon breast with quail’s egg, asparagus, pickled red onion, truffle and mash was an ingredient too far, but largely they were beautifully judged. The only misstep was the dessert, which sounded delicious – beetroot, chocolate, cherry – but didn’t quite deliver on flavour or texture. Breakfast was a full-on fry-up, with eggs, hash browns and mushrooms tasty enough to overshadow the sausages.

The house is on the outskirts of the village and is a pleasant 15-minute walk to the nearest pub, the Greyhound. Sadly, it has been over-modernised. We continued along farm track and footpath to Bere Regis, a couple of miles further, where there is more choice. The riverside town of Wareham is a 15-minute drive, and it is another 10 minutes to Corfe Castle, and 25 minutes to Lulworth Cove and Durdle Door.

The Barfoots have big plans for Abbotts Court. Bell tents and shepherd’s huts are arriving soon, along with an outdoor smokery. Foodie workshops have already begun, such as the Catch It, Cook It fishing days. Meanwhile, Mike and Alex are busy pickling and preserving spring veg in between services. Gordon Ramsay eat your heart out.
• Accommodation was provided by Abbots Court (doubles from £90 B&B), 01929 448638, abbots-court.co.uk

• Eat
For local food, try La Fosse in Cranborne, which runs monthly supper clubs alongside its frequently changing seasonal menu. The next one is vegetarian and vegan (£27.50 for three courses, 23 May).

• Drink
Check out The Gin House in Wimborne for cocktails; it serves more than 100 local and international gins.

• See
Athelhampton House near Dorchester is a beautiful 15th-century manor house with architectural gardens. Lulworth Castle and park is a 17th-century mock castle – you can climb the tower for panoramic views of the Purbeck countryside.

• Do
Arts By The Sea is a multi-arts festival in Bournemouth in September and October, while BEAF, the fringe festival, takes place in April and May.