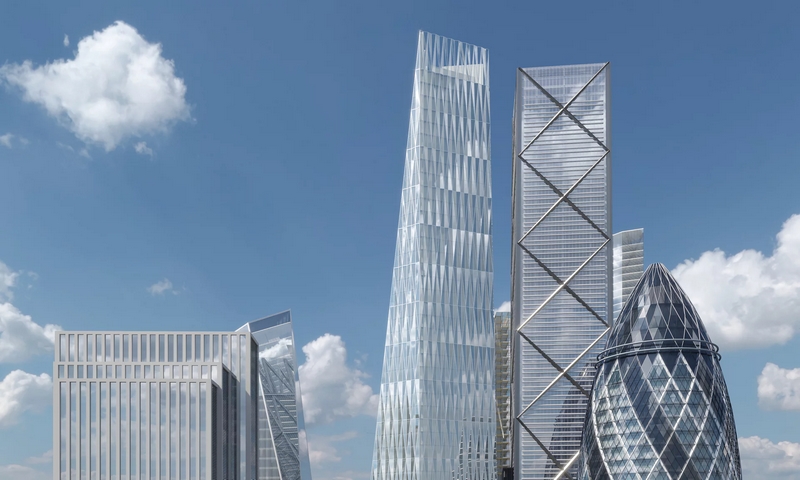 A 56-storey tower called The Diamond is set to join the growing cluster of skyscrapers in the City of London and will be the financial district’s third-tallest building when completed.

The planned 263.4m tower at 100 Leadenhall Street will rank behind 1 Undershaft at 290m, nicknamed the Trellis, where work is yet to start, and 22 Bishopsgate, the reworked Pinnacle at 278m, which is under construction. All three will eclipse the nearby Heron Tower, currently the tallest building in the Square Mile at 231m.

The new tower will have 102,000 sq m of office space to house more than 6,000 workers, with a free public viewing gallery, restaurant, bar and shops.

The wedge-shaped glass tower, which will have a facade made up of elongated diamond shapes, is being funded by the Hong Kong company Lai Sun Development, founded by textiles magnate Lim Por-yen. The skyscraper has been designed by Skidmore, Owings & Merrill, the architects behind One World Trade Center in New York and the tallest building in the world, Burj Khalifa in Dubai.

The Diamond, previously dubbed “Cheesegrater 2”, will be built next to the 225m Cheesegrater once three smaller buildings have been knocked down. Their tenants’ leases expire in 2023 but the developers will negotiate with them and hope to start construction sooner. It is expected to take four years to build. The firm is working with the developer London & Oriental.

Despite objections raised by St Paul’s Cathedral, the City’s planning and transportation committee voted 22-2 in favour of the new build. The application will be referred to the London mayor, Sadiq Khan, for his final decision.

London’s skyline is set to be transformed over the next decade with a record 510 tall towers, more than 20 storeys high, planned or under construction.

Work has started on 115 towers, also a record. Two of Europe’s tallest residential towers in Canary Wharf are expected to be completed by 2020, but the Shard is expected to remain the tallest building in western Europe, at 310m.