Total value of world’s top 50 most valuable apparel brands has declined by 8% as sector negotiates fallout from COVID-19 pandemic. Nike Does it Again Claiming Title of World’s Most Valuable Apparel Brand for 7th Consecutive Year.

Nike named world’s most valuable apparel brand for 7th consecutive year, brand value down 13% to US$30.4 billion. Footwear brands stamp authority and is only apparel sub sector to record brand value growth this year, up 9% on
average.

The brand still maintains a considerable lead over second-ranked Gucci, with a brand value of US$15.6 billion, down 12% from 2020. 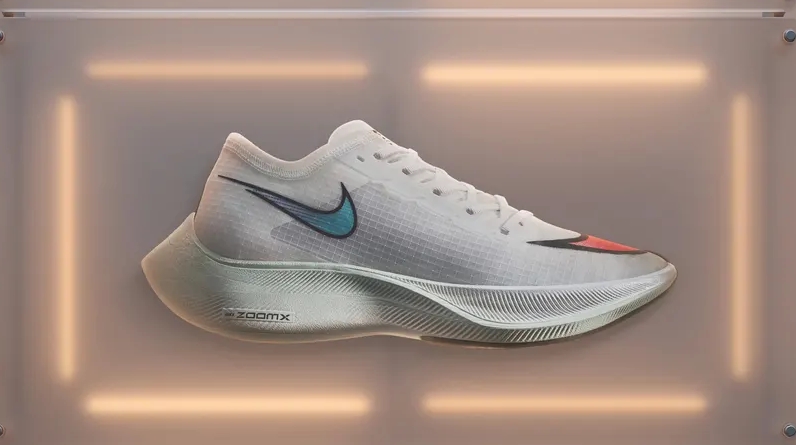 Nike’s sales took a hit last year as the brand was forced to shut the majority of its stores across North America, EMEA and, Asia Pacific due to the pandemic. The brand saw an impressive uptick in online sales, however, which almost doubled in Europe, the Middle East and Africa.

Nike – a brand eminent in innovation – has continued to make leaps and bounds with new technology in its products, most significantly the controversial Nike Vaporfly, a shoe that has dominated the international athletics arena in recent years, with athletes wearing them claiming 31 of the 36 podium positions in the six world marathon majors in 2019.

With the shoe surviving a ban for the now-postponed Tokyo Olympics, Nike can once again showcase itself as a brand that has helped to change the face of world athletics and sport.

The apparel ranking is divided into sub sectors: luxury; sportswear; fast fashion; watches, accessories & jewellery; high street designer; underwear; and footwear. Of these sub sectors footwear is the only one to record an increase in brand value year-on-year, posting a 9% increase in brand value on average. New entrants Timberland and Converse have performed particularly well this year, recording a 47% and 8% brand value increase, respectively. Nike-owned
Converse saw a modest uplift in sales last year, due to an increase in demand in Europe, as well has higher global
digital sales.

In contrast, underwear brands have suffered the most significantly this year, with the two brands featured in the ranking losing an average of 19% of brand value. Victoria’s Secret (brand value down 22% to US$4.2 billion) is the third fastest falling brand in the ranking. The brand has been facing continued backlash for the lack of diversity in its marketing and in model line-up, an issue that has only been exacerbated as Gen Z consumers, in particular, are redefining the social norms around body image.

The other sub sectors also fare less favourably this year, all recording drops in average total brand value: luxury (down 10%); sportswear (down 7%); fast fashion (down 7%); watches, accessories & jewellery (down 4%); high street designer (down 13%).

Fila is the fastest growing brand in this year’s Brand Finance Apparel 50 ranking following an impressive 68% brand
value increase to US$2.7 billion. The brand, which operates in 70 countries through licensing deals, celebrated strong sales growth towards the end of last year, particularly within the Chinese market. Since Fila Korea purchased the global Fila brand in 2007, the brand has worked on strategically embracing the return of trends which helped it make its name across the sector originally, including 90s fashion making several comebacks.

New entrants Timberland and Bosideng are the second and third fastest growing brands, up 47% and 39%
respectively. China’s Bosideng has entered the ranking in 50th position, with a brand value of US$1.5 billion. Bosideng announced a new clothing line launched with Jean Paul Gaultier, the former creative director of French luxury fashion house Hermès (down 2% to US$11.7 billion), which is being sold in stores and online on Chinese e-commerce giant Tmall’s platform.

Coach screeches to a halt

In contrast, Coach has recorded the biggest drop in brand value this year, falling 31% to US$4.7 billion. In line with sector trends, Coach’s sales and profits have taken a hit over the previous year. Coach’s parent company, Tapestry, has however cited that forecasts across its brands are looking more positive than anticipated thanks to triple digit e-commerce growth and a strong rebound across the Chinese market.

Coach has continued to embrace its strategy of celebrity-endorsed partnerships and collections, the latest of which,
saw the appointment of superstar Jennifer Lopez as the global face of the brand. 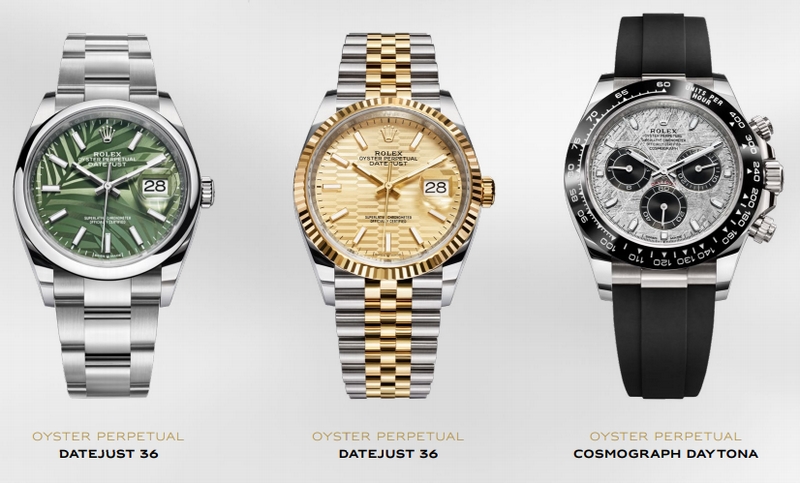 In addition to measuring overall brand value, Brand Finance also evaluates the relative strength of brands, based on factors such as marketing investment, customer familiarity, staff satisfaction, and corporate reputation. Alongside revenue forecasts, brand strength is a crucial driver of brand value. According to these criteria, Rolex (up 1% to US $7.9 billion) is once again the strongest apparel brand in the world, with a Brand Strength Index (BSI) score of 89.6 out of 100 and a corresponding elite AAA+ brand strength rating.

Despite the challenges of the last year, the market for luxury watches has shown remarkable resilience to the pandemic turmoil, with demand remaining stable, demonstrated by Rolex’s website traffic experiencing a surge over the previous year. 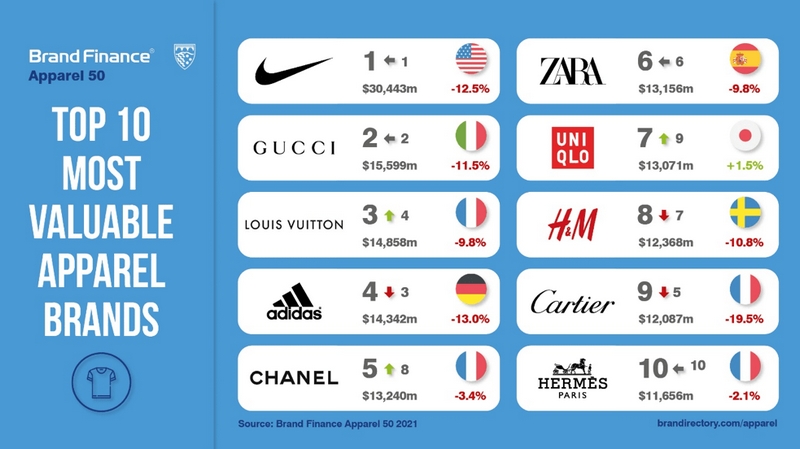 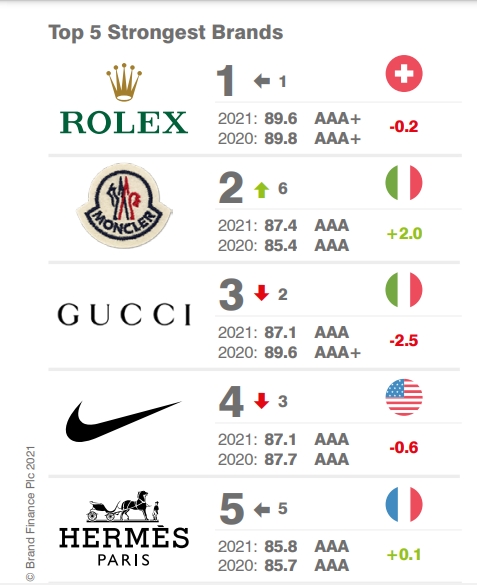 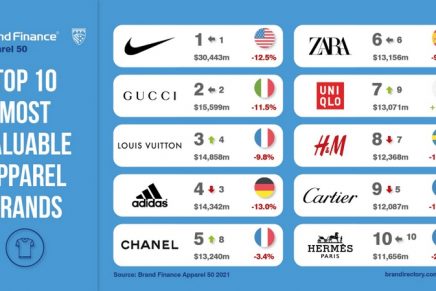 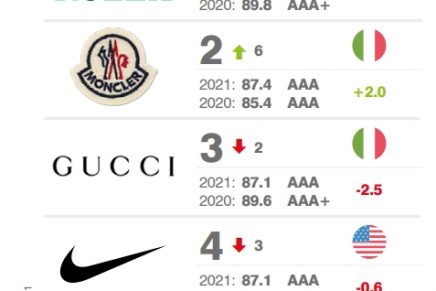 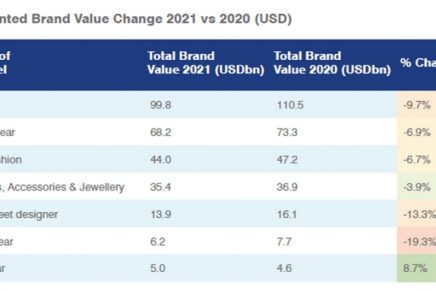 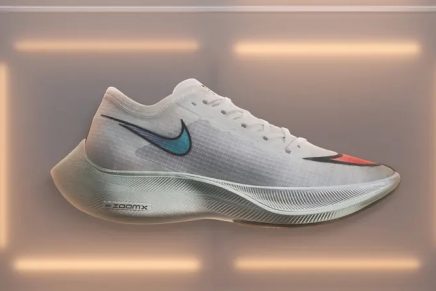 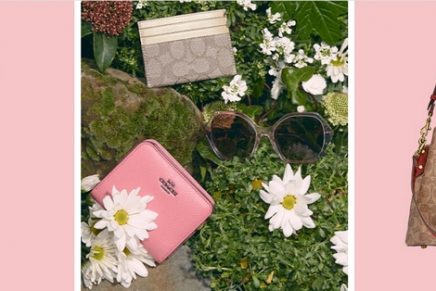 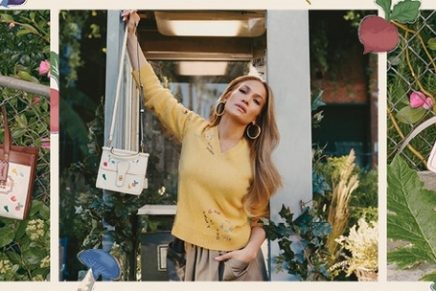