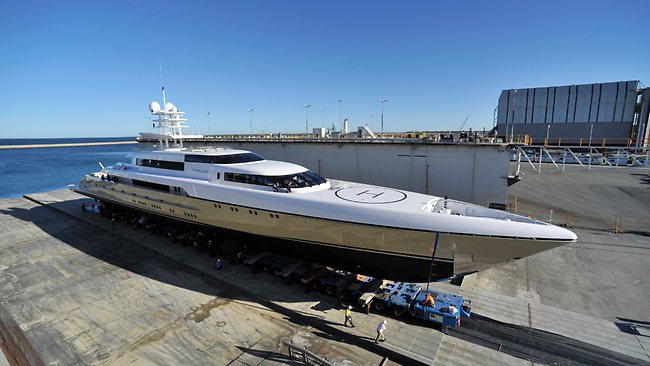 The 77-metre luxury superyacht Smeralda, the world’s longest aluminium motor yacht, was launched at Australian Marine Complex, reports perthnow. The yacht was built by Perth-based company Hanseatic Marine and had taken over two years and 550,000 man hours to build.

It’s the third superyacht produced for Hanseatic’s owner, German entrepreneur Guido Krass, who keeps the luxury toys for a year before on-selling them.

The Smeralda has been built to the billionaire’s specifications, complete with outdoor entertaining decks, glass jacuzzis, an outdoor cinema, night club and day spa. And, if guests get bored on the boat, there’s a helicopter pad and smaller boats, jet skis and scuba diving sea scooters housed in the yacht’s hull. The yacht’s lavish interior has a private apartment and 19 other rooms for cabin crew and VIP guests.