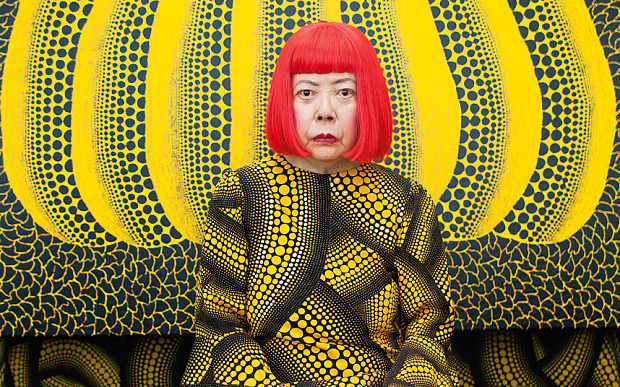 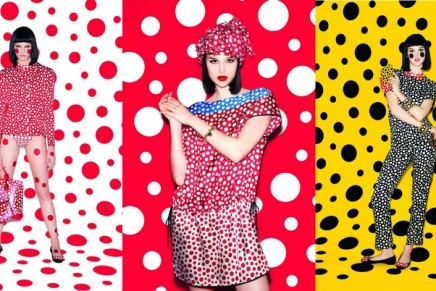 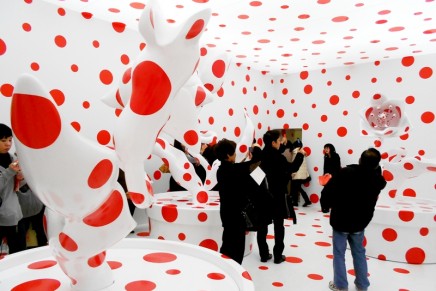 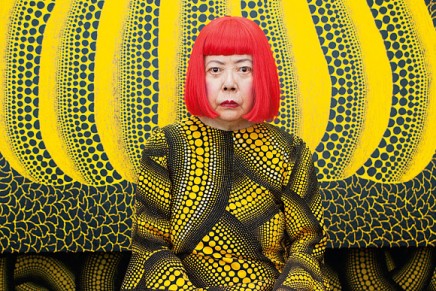 This article titled “Yayoi Kusama named world’s most popular artist in 2014” was written by Alex Needham, for theguardian.com on Thursday 2nd April 2015 04.01 UTC

According to a survey of museum attendance in 2014, the most popular artist in the world is a woman – Japan’s Yayoi Kusama.

Yet a survey of solo exhibitions in American galleries over the past six years has revealed that 73% were by male artists.

A report in the Art Newspaper found that Andy Warhol, Ellsworth Kelly and Jasper Johns each had seven exhibitions over the period. The female artist with the most exhibitions was Kara Walker, who had four.

However, as Kusama’s success indicates, audiences are not biased against women artists. The second-most popular solo show in the six-year period was Marina Abramovic’s retrospective at MoMA in New York. An average of 7,120 visitors a day came to see, among other works, Abramovic sitting motionless in the gallery.

She was only beaten by the sculptor Richard Serra, whose momumental sculptures drew 8,585 visitors a day to MoMA in 2007.

Defying the conventional wisdom that only big names draw crowds, the Swiss (and female) artist Pipilotti Rist had the fourth-most popular solo show in the period. Her installation at MoMA, which hosted 17 of the 20 most popular exhibitions in the six-year period, drew 6,186 visitors per day.

The Art Newspaper found that male artists represented by the world’s major art dealers were over seven times more likely to be given a solo exhibition than female artists signed to the same top gallerists, including Gagosian, Hauser & Wirth and David Zwirner.

Against this background, Kusama’s success in 2014 looks even more remarkable. The artist, who is 86 and has lived voluntarily in a mental health institution in Tokyo since 1977, drew over 2 million people throughout South and Central America to a retrospective including her famous polka-dot and mirror installations.

A second retrospective is currently showing in Taiwan, en route to New Delhi. As well as a pivotal figure in pop art and the avant garde, whose work encompassed sexually charged happenings and 18 novels, Kusama is now, suggests the Art Newspaper, “the poster girl for the globalisation of contemporary art”.