800ft above London at The View from The Shard, Western Europe’s tallest building, British sculptor Percy Salazar installed the World’s Highest Urban Ice Bar. The internationally renowned ice artist created a two tonne igloo decked out for comfort with blankets. Ice artist to the stars, Percy has previously worked on ice sculptures for the Queen, Stella McCartney and Lawrence Dallaglio.

The spectacular 360 degree views take in London’s most famous landmarks for up to 40 miles, including the Olympic Stadium and Canary Wharf to the east, Hampstead Heath and Alexandra Palace to the north, Buckingham Palace, the London Eye and Wembley Stadium to the west, and Crystal Palace to the south.

The project is designed for an ultimate ice breaker night organized for lively London singles by one of UK’s leading activity based dating sites.Dating site DoingSomething.co.uk are staunch believers that dates should give people something to talk about.

“If a date involving an igloo 800ft above London doesn’t give you something to talk about then we don’t know what will! Our site is based around activities stimulating conversation from the get go. And this night will be the ultimate ice breaker,” said Matt Janes, DoingSomething.co.uk CEO and cofounder.

As if this wasn’t enough the first 200 guests will receive complimentary sorbetto and gelato courtesy of Snowflake Luxury Gelato. There are two artisan gelatos for guests to choose from including Hazelnut and the Valentine’s Special, Blind Date and Honey Gelato. Alternatively try a sumptuous sorbetto, flavours include Raspberry, Mango and Passionfruit and the award-winning Extra Dark Chocolate.

Daters will witness a new Guinness World Record on the night as the one-night only ice bar will become the World’s Highest Urban Ice Bar. 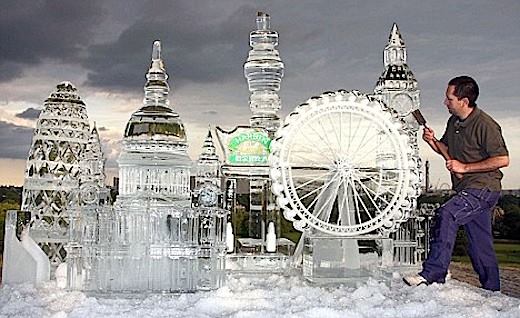