Porsche’s drive to enhance performance has led to the creation of the all-new Porsche 911 Turbo S Coupé and Cabriolet models.

The new range-topping 911 is being launched as a Coupé and Cabriolet, both powered by a new 3.8-litre boxer engine with two VTG turbochargers, which delivers 478 kW (650 PS), 51 kW (70 PS) more than its predecessor. Maximum torque is now 800 newton metres (an increase of 50 Nm). The Turbo-specific eight-speed Porsche Doppelkupplung (PDK) cuts the sprint from zero to 100 km/h to 2.7 seconds (0.2 seconds faster), while top speed is unchanged at 330 km/h.

The dimensions of the 911 Turbo S have been increased significantly in line with the enhanced driving dynamics.

For the first time, the 911 Turbo S transfers its power to the road with mixed tyres in two different sizes: it has 20-inch tyres with their unique 255/35 dimensions at the front and 21-inch 315/30 tyres at the rear. New equipment options underline the much sportier image of the all-wheel drive 911 . These include the Porsche Active Suspension Management (PASM) sports chassis that has been lowered by 10 mm and the sports exhaust system with adjustable flaps that guarantees a distinctive sound.

The completely new engine of the 911 Turbo S is based on the 911 Carrera engine generation.

It features a completely redesigned charge air cooling system; new, larger VTG turbochargers in a symmetrical layout with electrically adjustable wastegate flaps, as well as the use of piezo injectors, which have significantly improved the vehicle’s characteristics with regard to responsiveness, power, torque, emissions and revving ability. The new six-cylinder engine is aspirated by a new intake system.

The standard equipment list includes a full leather interior and carbon trim in combination with Light Silver accents. A new designed two-tone interior will be available by Porsche Exclusive Manufaktur as an option. Other features onboard ex-works are the GT sports steering wheel, the Sport Chrono package with newly integrated Porsche Track Precision app and BOSE Surround Sound system. 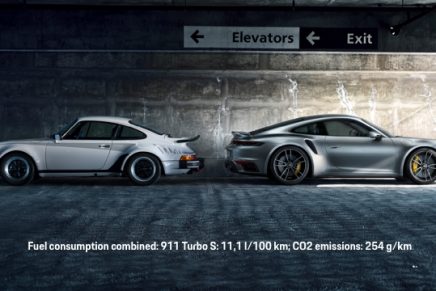