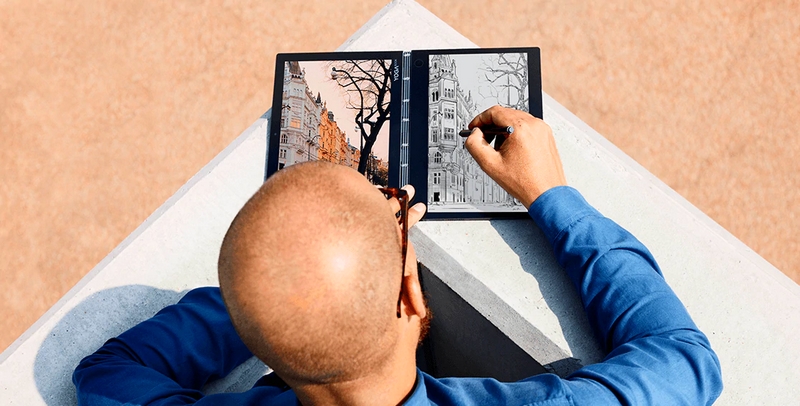 This article titled “Which is the best tablet for an artist?” was written by Jack Schofield, for theguardian.com on Thursday 25th July 2019 07.00 UTC

My wife is an artist. She has been using a Samsung Galaxy 10.1 since 2014. This allows her to draw and paint using a stylus supplied with the pad. She loves using it, but it’s past its best and the battery won’t hold a charge for very long. I am thinking of buying her a replacement. What should I go for? Hugh

If you’re an artist who uses computers, you’ve never had it so good, as former prime minister Harold Macmillan almost said. Touch-sensitive screens are becoming ubiquitous, so there are dozens of usable devices at a wide range of price points. However, they are not all the same, and people can be confused by the differences.

At first, artists mainly used graphics tablets connected to personal computers, with Wacom becoming the dominant brand. In this case, you draw on the tablet with a stylus and your pen-strokes appear on a separate screen. It’s a little like using a mouse.

Later we got drawing tablets, where the blank surface of the graphics tablet has been replaced with a screen. Wacom is still a major player with drawing tablets such as the Cintiq 13HD, but there are cheaper options. XP-Pen’s Artist16 Pro has been getting good reviews.

Graphics tablets and drawing tablets use the computing power of laptops or desktops, so they can handle the huge, detailed drawings required for architectural design and similar purposes. The tablet view may be just a window onto a much larger design.

Today, almost all smartphones and tablets, and most hybrid or convertible laptops, have touch screens, so you can draw on them with your fingers. A smaller number support pens. The key point is that they are standalone devices. They don’t need to be attached to a computer.

The leading examples fall into three main ranges: Samsung’s Galaxy Tab, Apple’s iPad Pro and Microsoft’s Surface Pro. There are alternatives, but these are the ones to beat.

From a drawing point of view, the important points include screen size and resolution, the colour accuracy of the screen, pen pressure levels and latency. Basically, if you press harder, the pen should produce a stronger line. A pressure sensitivity of 2,048 is recommended. I can’t tell the difference between 256, 1024 and 2048, but as an artist, your wife probably can.

Latency refers to the delay between the pen or stylus moving across the screen and a line appearing. Latency used to be terrible on tablets. It doesn’t seem to be a problem on the latest devices, though some apps are worse than others. The best way to check latency is to try a device. However, you can get a pretty good idea from watching people draw in YouTube videos.

Standalone tablets, unlike graphics tablets, can perform many other functions. You can do your email, watch videos, play games and so on. Some people will choose one tablet rather than another because it runs particular software – such as Adobe Creative Suite – or particular apps. Some will be influenced by how well it works with their other devices and online services, such as Office 365. Many will be influenced by price, though you haven’t given me a budget.

With hindsight, it would be a good idea to check how much it costs to replace the battery in the tablet you choose. All the main ranges have sealed-in batteries, which does not bode well for their longevity. Battery degradation is also a risk factor when buying second-hand devices.

As I’ve said before, it’s generally not worth changing systems unless you need to. When you switch, you give up a lot of valuable experience, you lose the comfort of familiarity, and you may have to find and learn a lot of new programs and/or apps. You shouldn’t switch unless the new system delivers one or more significant advantages – not minor ones that all its rivals will add in a year or so – and does not come with numerous disadvantages.

Your wife seems to be a happy Samsung Galaxy user. If she doesn’t have any real problems with her current device, and isn’t keen to try something new, your replacement should be as much like that as possible, only better.

The current top choice for Android users is the 10.5in Samsung Galaxy Tab S4, which includes an S Pen. Prices start at about £416 with 4GB of memory and 64GB of eMMC storage. It also has an SD card slot for easy expansion.

The S4 improves on the 9.7in S3 by offering a bigger screen with higher resolution, slimmer bezels, a faster processor and twice as much storage. However, the S3 is still a viable option if you want something cheaper. Artist blogger Teoh Yi Chie compares the S3 and S4 in a YouTube video, and in a more detailed post at Parka Blogs.

Fortunately, there are cheaper options. The 10.5in iPad Air (2019) is very much like the old iPad Pro (2017) but has a much faster processor, and it’s cheaper. The main things you lose are the “ProMotion display” refresh rate of up to 120 Hz – the iPad Air is a perfectly acceptable 60Hz – a couple of small speakers and a slightly worse rear camera (8MP instead of 12MP).

Usually, someone would choose based on a need for certain apps or a preference for one of the operating systems. I think the iPad has more and better tablet apps. However, both systems seem to be about equally good for drawing, and your wife already knows how to use Android.

Microsoft’s Surface Pro tablets work well with pens, but they are clearly the third choice for any artist who doesn’t need Windows for other purposes. Like Apple, Microsoft also charges separately for pens and keyboard covers, so the final price may be higher than anticipated.

One interesting but decidedly odd device is Lenovo’s 10.1in Yoga Book convertible. This has two touch-screens: a colour screen for normal use, and a monochrome screen that doubles as a keyboard. You can also use the monochrome screen for writing and drawing. It has 2,048 levels of pressure sensitivity, so it might be quite good. (I only tried the keyboard; I didn’t like it.)

The Yoga Book started as a Windows machine, but Lenovo has switched to an Android version that only costs £299.99, including the pen.

It’s not the best choice for your wife’s purposes. However, others could find uses for a 690g dual-screen Android laptop where one screen works as a colour tablet and the other lets you draw and make handwritten notes.

Incidentally, the upgraded version of the Windows device is the 10.8in Yoga Book C930, which combines a Quad HD colour touch-screen with an E-Ink touchscreen for £1,099.99. As before, both screens support pens.

Have you got a question? Email it to Ask.Jack@theguardian.com