For the first time in at least two decades of Economist Intelligence Unit reporting the worldwide cost of living survey Zurich sits atop the ranking as the world’s most expensive city. The  Swiss city was pushed up 4 places compared to last year to overtake Tokyo which remains in 2nd place. Geneva, the other Swiss city surveyed saw a 30 percentage point rise in the cost of living to move up six places into joint third alongside Osaka.

Both Japan and Switzerland have seen strong currency movements over the last few years which have made them relatively more expensive. This has become especially true of Switzerland in the last year, where investors looking for a haven currency outside the beleaguered Eurozone have invested heavily in the Swiss Franc, prompting an unprecedented move by the Swiss government to peg the Swiss Franc to the Euro to keep the currency competitive.

Although Switzerland has long featured in, or around, the world’s most expensive cities, the strong swing in currency headwinds is responsible for Zurich’s current elevated position. In local terms the opposite has been true, with relatively cheaper imports and a stable economy keeping local price inflation low. This mirrors a similar situation in Japan over recent years which resulted in Tokyo and Osaka traditionally holding the unenviable title of being the world’s most expensive cities.

Local inflation in mature markets always has far less influence on the relative cost of living than the currency movements of the countries in question. This also explains the recent presence of Australian cities like Sydney and Melbourne in the ten most expensive locations as last year saw the Australian dollar pass parity with the US dollar from holding half that value a decade ago.

As well as currency movement, structural factors maintain the high cost of living in many of the top cities. Despite Eurozone weaknesses affecting markets like Greece, Ireland, Portugal, Spain and Italy, evidence is that German and French cities are still relatively expensive with Paris and Frankfurt holding firm in the ten most expensive. Oslo, which was considered the world’s most expensive city only a few years ago also sits towards the top of the ranking although Singapore’s presence in the top ten highlights a shift away from Western Europe towards Asian hubs. Cities from the Asia Pacific region (including Australasia) now make up half the ten most expensive. That said, Western Europe still accounts for 24 of the most expensive cities in the top 50, with 14 hailing from Asia.

Top 10 Most Expensive Cities In The World – 2012
The top ten costliest cities were divided equally between Europe and Asia-Pacific.

The ten least expensive cities – Subcontinental bargains
Although Asian hubs are making their presence felt at the top of the cost of living stakes, another kind of Asian hub is making its presence felt at the bottom. Three of the four cheapest locations hail from the Indian subcontinent, highlighting why India has been such a target of labour outsourcing, relocation and FDI over the last decade. 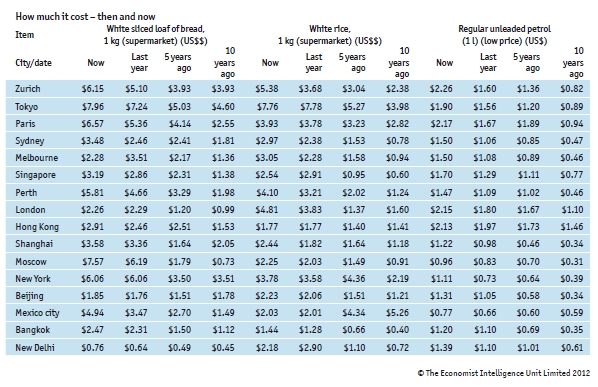 The survey itself is a purpose-built internet tool designed to calculate cost-of-living allowances and build compensation packages for expatriates and business travellers. The survey incorporates easy-to-understand comparative cost of living indices between cities. The survey allows for city to city comparisons, but for the purpose of this report all cities are compared to a base city of New York, which has an index set at 100. The survey has been carried out for more than 30 years.