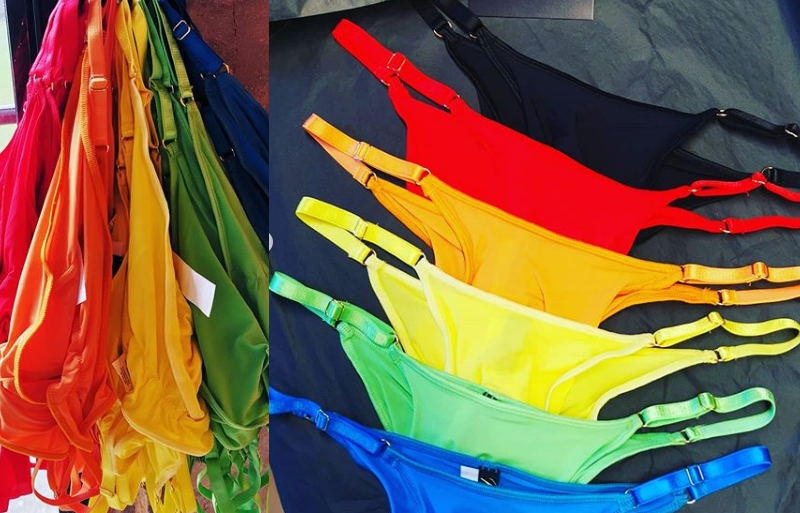 This article titled “Victor’s secret: male lingerie is coming to a bloke near you” was written by Priya Elan, for The Observer on Saturday 28th March 2020 14.15 UTC

Decades ago, Prince sported high-cut, leather-look women’s briefs on stage, and Rod Stewart borrowed satin knickers from his then girlfriend, Britt Ekland, to wear under tight trousers while performing. Now, ranges of male lingerie are being launched for the man on the street to buy – raising the question: will it catch on?

One man thinks so. Jules Parker, 54, is a full-time metalworker who has set up Moot Lingerie, which combines traditional male underwear shapes with non-traditional lingerie flourishes and fabrics.

“If I wanted anything more beautiful than daggy old boxer shorts there was nowhere to go, even online,” Parker explains. “Women have a myriad shops or online outlets to find any kind of underwear they could wish for but the only items of lingerie made for men were cheap, tacky, novelty stuff.”

On the Moot site there are a number of envelope-pushing designs, from the Parisian (frilly knickers but sculptured for a man) to the Stardust (a thong with heritage lace pouch).

He says that, when designing the pieces, he “wanted to keep the language of typical lingerie but tailor it to fit the male form”. To begin the process, he says that he “couldn’t just take the shapes and sizes of boxer shorts and convert them. We went back to basics”.

Parker acknowledges that the idea of “lingerie for men” is a controversial one. “Men have not had this option before, it’s not been considered acceptable to want to decorate yourself with this particular material,” he says. “It’s been utterly taboo. You can pierce your skin, tattoo yourself or shave your head, but don’t mess with men’s underwear.”

Related: ‘Oh my goodness!’: from jockstraps to codpieces, how menswear got sexy

As contentious as the launch of Moot might be for some, it comes at a time when fashion’s notions about gender are more fluid. On the catwalk, French designer Ludovic de Saint Sernin has made undergarments into outerwear (he has featured leather briefs and male bras at his shows), while Rick Owens and Thom Browne have experimented with codpieces and skirt-short undergarments.

“I think, as brands like Gucci take more of a gender-bending approach to fashion, we will see more lingerie on the catwalk,” says Zak Maoui, junior style editor at British GQ. “I don’t think men will start to wear the same sort of lingerie as women, but I think there’s scope for men’s undergarments to become a little sexier, a little skimpier and a whole lot more interesting.”

Parker says: “It’s about offering people more choice, the fabric and the design that will make you feel fabulous. It’s great to see more options open up to people. Why not?”

Wearing Spanx gives me that little boost of confidence – it affects my posture, plus I don’t feel as guilty going on that run later

Thanks to companies like Rihanna’s Savage X Fenty, the lingerie business as a whole is detaching from the narrowly defined ideas about who a lingerie customer is and what they should look like. Messaging about diversity and inclusion has replaced those about body type homogeneity as promoted by brands such as Victoria’s Secret. The men’s undergarment industry is morphing, too, not only through brands such as Moot but also through shapewear. In November, Kim Kardashian hinted that her shapewear line SKIMS Solutionwear could soon incorporate a men’s line.

The optics look good for a progressive company like SKIMS to make a move into men’s shapewear (Spanx and Under Armour already make it), but it also makes financial sense – WWD reports that the global shapewear market could be worth $6.4bn by 2024.

While shapewear, like lingerie, is considered a bit embarrassing for men, it also exposes a very human side of men’s dressing. Last month, for example, on The Wendy Williams Show, actor Jason Biggs reluctantly admitted to wearing Spanx. “It gives me that little boost of confidence,” he said. “It affects my posture, plus I don’t feel as guilty going on that run later.”

The co-founder of Agent Provocateur and Les Girls Les Boys, Serena Rees, is sanguine about male shapewear. “I went into Selfridges to see a display of our underwear and I was really surprised to see a range of Spanx for men on display. I giggled to myself but then I thought, ‘Why not? Of course, men want to pull their tummies in, too’. Do I think it’s going to take off in a big way for men? It might happen, but it won’t happen overnight.”

For GQ’s Maoui, it exposes universal truths about male and female behaviour. “Men think about their bodies just as much as women likely do,” he says. “So, for them to also be given the opportunity to nip, tuck and suck everything in is a great thing. Before we know it, suction pants will be having their moment.”