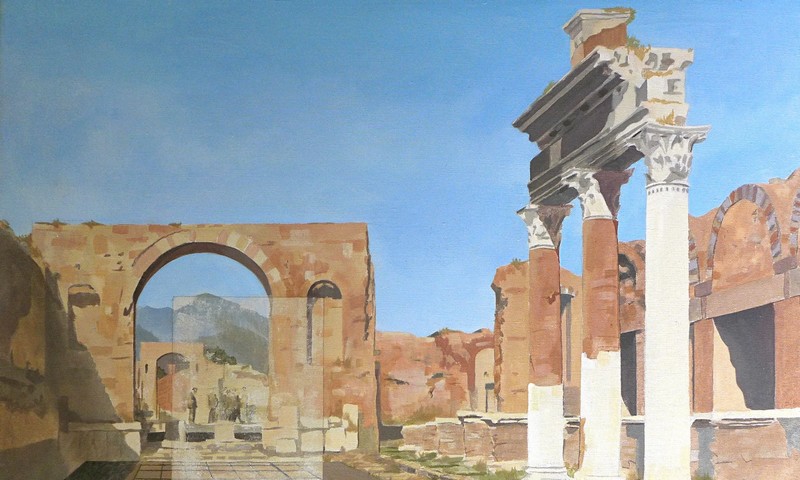 This article titled “This week’s new exhibitions” was written by Robert Clark & Skye Sherwin Sherwin, for The Guardian on Friday 14th August 2015 12.15 UTC

Alexander Massouras is an Oxford University fellow, art historian and collector, as well as an artist. And it shows – but not in any unfavourable fashion. While it might be presumed that artists intuitively indulge in getting their hands dirty, whereas academics reflect on the outcomes of their struggles, Massouras is unashamed to present himself as an artist who spends as much time in the library as the studio. Accordingly, his paintings, as translucent as projected lecture slides, always seem critically reflective. An image of a sun-drenched classical facade is created with paint stripper as well as oil on linen. Drawings are semi-erased and figures set against blackout backgrounds. Whether working from archaeological plans or holiday snaps, his images are not just pictures but also meditations on the contrivances of memory and the manipulations of reproduction.

Given that performance art has flourished in Northern Ireland over the last few decades against the background of the Troubles, there has been very little art historical recognition of the fact. This exhibition aims to redress that oversight with live performances, video and photographic documentation, and assorted archival memorabilia. Intriguingly, it stresses how suited performance art has been to addressing the social uncertainties of political problem zones. The renowned likes of Alastair MacLennan, Sandra Johnston and André Stitt are seen to have infiltrated a divided society with acts of painful endurance, existential rage and the occasional, disarming relief of hilarity.

From Turner to De Kooning, wild-at-heart artists have forced the raw matter of paint, with its quick liquidity and viscous malleability, into artworks that reflect the rhythms of nature, their tactile sensuality differentiating them from the clinical gloss of landscape photography. Against this backdrop, Rick Copsey’s recent work confounds. On the face of it, these are proper photographs, Digital C-type metallic prints mounted on aluminium. Yet their imagery evokes universes of Romantic wonderment alien to the forensic exactitude of the camera. In fact, what we are looking at are blown-up photographs of minute details of the surface of the artist’s paintings. The common assumptions about photographic verity are brushed aside in Copsey’s trompe l’oeil shadows, perilous ridges and ambiguous refractions of abstract light and dark.

Towards An Alternative History Of Graphic Design, Bexhill-on-Sea

This show of 1960s and 1970s artists’ books has plenty for print junkies. It focuses on four self-publishers: German pop artist Wolf Vostell, whose magazine Pop Und Die Folgen is packed with hectic collages of consumer culture dreams and symbols; Beau Geste Press, which spread mail art and Fluxus via art mag Schmuck; Assemblings, with its madcap mix of paper and typography; and Hansjörg Mayer’s bRIAN, influenced by the visual text games of concrete poets.

When it comes to music promos, Holly Blakey is one of the hottest young choreographers out there. She’s responsible for the statuesque silhouettes in Jessie Ware’s Night Light and the bloody-nosed lad letting rip in Young Fathers’ Shame. She has also been making headway in the art world, working with Hannah Perry on steamy, youth culture-infused performances. This Friday marks her first solo gallery effort, with dancers set to explore the territory in which she’s got plenty of expertise: pop video moves, sexualised bodies and consumerism.

In one of the art world’s more incongruous pairings, linchpins of Los Angeles’s avant-garde music scene, art band Lucky Dragons, are staging their psychedelic, electronic experiments between the US west coast and Southend-on-Sea this summer. One half of the duo, Luke Fischbeck, has gone to work in a specially created studio-cum-project space, The Bear Pit, within the seaside town’s ground-breaking gallery Focal Point. Here, overseen by audiences from the viewing gallery, he’s working up feedback loops of images and sound sent by his bandmate Sarah Rara. Lucky Dragons aren’t the kind of laptop noiseniks who stand aloof on a stage. Their live shows have seen music improvised via the audience, hooked up with wires or playing percussive technology. You can expect both their gallery time and a special mid-residency performance next Saturday to rewrite the usual performer/spectator divide and go big on audience collaboration.