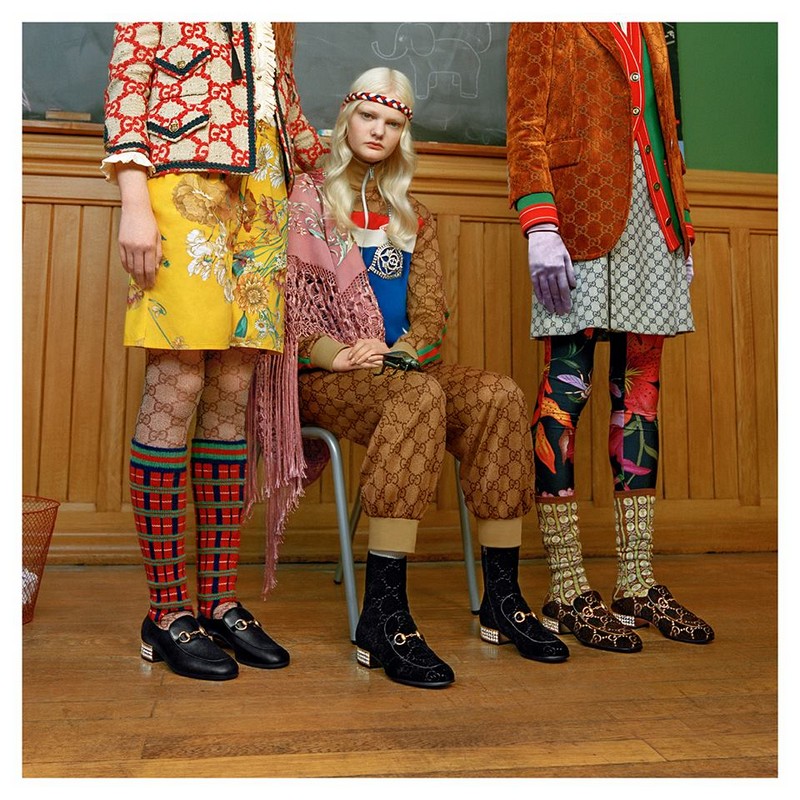 This article titled “The bright side: why women fell out of love with black” was written by Hannah Marriott, for The Guardian on Thursday 26th July 2018 05.00 UTC

New Yorkers do it. Parisians do it. Fashion types, Swedes and architects do it. In fact, name any stylish tribe and you’ll find that they do it. Wear black, that is – a colour that has come to signify so much: rigour, elegance, sex appeal, piety, formality, slenderness, even wickedness.

Recently, however, black’s supposedly timeless status as the go-to hue for the chic has been thrown into the shade. And maybe that is no bad thing.

Scroll through any British fashion website today and a rainbow of colour beams out. The breadth of shades feels remarkable: Topshop sets out its stall with a parrot-green silk skirt, a lemon coat and an azure trouser suit. At Boden, it’s all tomato-red cardigans and spotty cerise frocks. At Zara, there are russet and emerald tartans and rollneck jumpers in highlighter pen yellow and candy pink.

Yes, Britain is in the midst of a heatwave, but this is no seasonal aberration. For months, the fashion news agenda has been hijacked by colour, seen everywhere from Amal Clooney’s dandelion-yellow royal wedding frock to Janelle Monáe’s so-called “vagina” trousers (pink, of course).

Colour is hot, and the trend forecaster WGSN has the data to prove it. In January, it says, brightly coloured clothes represented a 20.2% share of the UK market, up from 16.7% two years previously. Meanwhile, between April 2017 and April 2018, black fell by 10%. Yellow has performed spectacularly, up 50% year on year. Another retail analyst, Edited, has a different take, but one which is nevertheless telling. Though it reports that the overall ratio of black clothing sold is up, the shade has slipped out of the fashion spotlight, falling by 2% this year within “best-selling products – the stuff that sells out fast”, according to the retail analysis and insights director Katie Smith.

Black is not dead, but Florence Allday, Euromonitor International’s analyst, predicts it will become an “increasingly smaller proportion of retailers’ product offering”, thanks to shifts in our lifestyles. “Now your office can be anywhere, the boundaries between formal/informal, work/home, online/offline are blurring,” she says. “Colour is no longer seen as frivolous, eccentric or inappropriate.”

Colour is going nowhere for autumn, when the trends set to trickle down from the catwalk include neon and hi-vis. And this is not just for the very young or achingly hip: the philosophy behind John Lewis’s biggest womenswear relaunch in decades, on sale in September, is about using colour as a means for expressing individuality, with most items available in up to four hues.

The professionally seen-and-not-heard have used colour cannily for decades. The Queen, for one, dresses brightly to ensure visibility. Recently, she has noticeably ramped up the intensity, dabbling in head-to-toe lime green and shocking chartreuse.

Such expert tricks are becoming part of civilian wardrobes, too, thanks to social media, and what Smith describes as “millennial peacocking”. She says: “It’s the fastest way to stand out on an endlessly updating feed.”

Instagram stars are virtuoso colourists. The Danish street style star Pernille Teisbaek, for example, is an icon for what passes as understated chic now. Although monochrome makes up a significant part of her feed, she uses colour when it counts. On the cover of her recent book, Dress Scandinavian, for example, she wears mustard trousers, a canary-coloured jacket and a T-shirt with the word “yellow” over a picture of a bunch of bananas, an image which kills dead the idea of navy-and-cream Scandi minimalism.

As the internet threatens the future of the traditional high street, the niche brands flourishing online have colour at the centre of their business plans. Kitri, for example, has seen products such as its £145 grass green Gabriella dress go viral. When the company launched, in March 2017, founder Haeni Kim says: “There was more of that traditional retail sense of putting more quantity behind neutrals. Now, we have started phasing out neutral colours, which is very unlike the traditional rules.” Bright colours, she says, “make people feel special. They get such amazing compliments. They photograph well on our website, and also stand out when customers take photographs of themselves. We are living in a very photographed world.”

Even vampires don’t wear much black these days, according to Susie Cave, the wife of musician Nick, whose label, the Vampire’s Wife, has quickly captured the fashion zeitgeist. The brand’s name, which was always meant to be ironic (“You know, my husband has been held hostage by the Prince of Darkness thing for years,” she says), might suggest a Morticia Addams palette – but the emphasis is on peaches-and-cream florals and deep shimmering greens.

“I think the world in which we live as women has become so divisive, so bloodthirsty, so vindictive and puritanical that women want to exist beyond these reductive influences, and colour is one way of doing this,” says Cave. “Colour has a huge positive psychological impact – it is a shout of individuality – and I think women want some life and wonder and joy and wildness in their lives and colour gives them that.”

Cave is far from alone in using emotional language about colour. In fact, one of the most fascinating shifts in our approach to colour is the way we talk about it. In the 90s, colour analysis meant finding out if you were “cool autumn” or a “warm spring” in order to buy a jumper that would make your eyes sparkle. Now, colour chat rarely mentions appearance, but is about politics, identity and mood.

In 2016, the term “millennial pink” was coined to describe a shade said to encapsulate the moment’s “ambivalent girliness”. Since then, as the fashion blog ManRepeller wrote in May, colour has become clickbait. Other shades with catchy names – among them “Gen Z yellow” and “melodramatic purple” – have also been briefly posited as generation-defining, while bright colours are increasingly used for protest, from pink pussy hats to calls to wear red for International Women’s Day, or green for Grenfell or orange for gun safety.

WGSN’s colour director, Jane Boddy, believes we are all increasingly aware of “how colour connects us, as human beings, and how we use it as a tool to define us”. Certainly, a fascination with something as digestible as colour makes sense when the news agenda is so tangled and baffling, thanks to Brexit and Trump.

We may be living through the most visual era ever. But at least fashion experts are no longer urging women to wear black clothing to look thinner or less distracting in the workplace.

Issues of class and gender swirl around black dresses like clouds of chiffon. Black has been linked with money and taste since the 1500s. In the Victorian era, it was a signifier of mourning, and scandalously worn by women of loose morals in paintings, including Manet’s A Bar at the Folies-Bergère and John Singer Sargent’s Madame X. The pivotal moment, however, for black as we know it was Coco Chanel’s little black dress, a simple, long-sleeved, straight-up-and-down shift hailed, on a 1926 Vogue cover, as the fashion equivalent to Ford’s Model T, “a sort of uniform for all women of taste”.

The reality of Chanel’s LBD was far less progressive than the mythology suggests. According to Shelley Puhak, writing in the Atlantic: Chanel’s innovation was an appropriation of servant’s uniforms, part of the luxurious poverty – “la pauvreté de luxe” – trend “reserved exclusively for those who could ‘afford’ to look poor by pretending that they simply couldn’t be bothered with fashion. But on closer inspection, there would be some small detail in her seemingly anonymous garment – a certain cut or fabric or label – that acted as a secret handshake for those in the know.” Plus ça change.

Little black dresses have since become a cultural totem. They can launch careers (Liz Hurley and her safety pins) and wreak revenge (Princess Diana at the Serpentine Gallery party in 1994). Their icons are usually very sharp and very thin. The patron saint is Audrey Hepburn in a black Givenchy shift in Breakfast at Tiffany’s or a black beatnik rollneck in Funny Face. Other notable black dress icons include the quartet of grumpy glamazons in the video for Robert Palmer’s Addicted to Love.

Black is not very friendly. So many of the aphorisms that exist about the shade have a hectoring tone: “A woman without a little black dress, has no future,” said Coco Chanel. Black, according to the Japanese designer Yohji Yamamoto, says: “I don’t bother you. Don’t bother me!” Karl Lagerfeld, of course, thinks wearing black is much safer than dressing according to your own terrible taste. “If you’re wearing black, you’re on sure ground.” And behind it all is the pernicious idea that black matters because, as Christian Dior put it: “It is the most slimming of all.”

So, is black a feminist issue? Susie Orbach says black has been “coded” as elegant, but often this really means slimming. “You could go back to Breakfast at Tiffany’s, the image of the gamine, cute sophisticate in the black dress. What’s in that is skinny, which, of course, has been absolutely critical to the representation of femininity for years.”

At a time when body image issues are worse than ever, according to Orbach, dancing on black’s grave is probably not merited. “There is no bloody difference when you are talking about clothing,” she says. “It’s still about: ‘How do I represent myself?’ There is always an internal eye that’s judgmental, whether the current trend is that you need to stand out, rather than look svelte and sophisticated. It’s the same thing, just a different version of it. It strikes me as a wish too far, frankly.”

Naomi Wolf, the author of The Beauty Myth, is a little more optimistic. “If women are embracing colour, it suggests that they are confident they can be taken seriously without wearing black,” she says. “If people aren’t choosing clothes primarily to appear smaller, I think that’s really politically important. It says: ‘I’m here and I’m not ashamed.’ It’s very non-apologetic.” And that’s an argument that I can buy into. After all, we may as well look on the bright side.