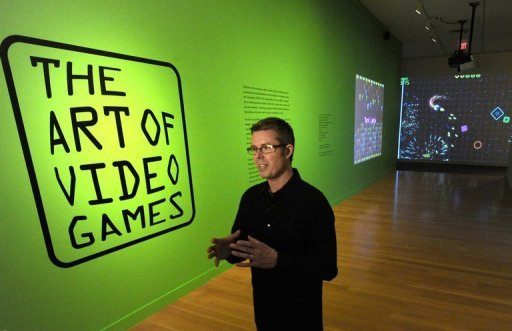 A major exhibition at the Smithsonian American Art Museum in Washington celebrates video gaming‘s rich creative side and the people behind a medium that’s still in full bloom.

Video games have entered the realm of art with a major exhibition at the Smithsonian American Art Museum in Washington.

In the forty years since the introduction of the first home video game, the field has attracted exceptional artistic talent. An amalgam of traditional art forms—painting, writing, sculpture, music, storytelling, cinematography—video games offer artists a previously unprecedented method of communicating with and engaging audiences.

The Art of Video Games is one of the first exhibitions to explore the forty-year evolution of video games as an artistic medium, with a focus on striking visual effects and the creative use of new technologies. It features some of the most influential artists and designers during five eras of game technology, from early pioneers to contemporary designers. The exhibition focuses on the interplay of graphics, technology and storytelling through some of the best games for twenty gaming systems ranging from the Atari VCS to the PlayStation 3.

Eighty games, selected with the help of the public, demonstrate the evolution of the medium. The games are presented through still images and video footage. In addition, the galleries will include video interviews with twenty developers and artists, large prints of in-game screen shots, and historic game consoles. Chris Melissinos, founder of Past Pixels and collector of video games and gaming systems, is the curator of the exhibition.

“This is not about the art within video games,” said Melissinos, an avid gamer since he was a 10-year-old in his native New York borough of Queens. “This is about video games themselves as an artistic medium.”

“When hardcore gamers come in here, they’re going to go, ‘Yes, these are the correct games to represent these different eras’,” said Chris Kohler, gaming editor of Wired.com and an advisor to the exhibition.

“But when non-gamers come in, I think they’re really going to get an education into the art form that this medium really truly is, and has become, and how it has evolved,” he told AFP.
Developments in hardware and software, as well as the advent of the internet, have given artists an ever widening palette of tools with which to create, while common game-play elements can be seen throughout. Five featured games, one from each era, show how players interact with diverse virtual worlds, highlighting innovative techniques that set the standard for many subsequent games. The playable games are Pac-Man, Super Mario Brothers, The Secret of Monkey Island, Myst, and Flower.

The Smithsonian American Art Museum invited the public to help select the video games to be included in the exhibition. The 240 games on the ballot were selected by Chris Melissinos, who worked with the museum and an advisory group consisting of game developers, designers, industry pioneers, and journalists. The games were selected based on a variety of criteria, including visual effects, creative use of new technologies, and how the game fit into the narrative of the exhibition. Voting took place between February 14 and April 17, 2011. More than 3.7 million votes were cast by 119,000 people in 175 countries!