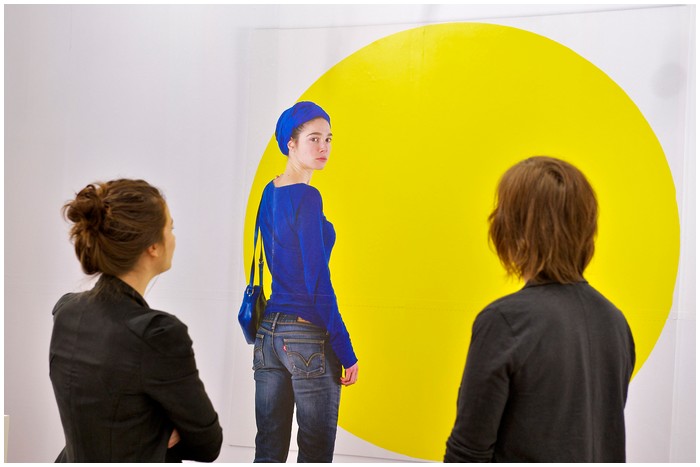 The 43rd edition of Art Basel in Switzerland closed on Sunday, June 17, 2012. This year, the annual reunion of the international artworld again attracted 65,000 artists, collectors, curators, and art lovers from around the globe.

Shortly before the show, visitors could download the Art Basel Smartphone app. Using an iPad, iPhone, Blackberry or other smartphone, Art Basel’s galleries, artists and exhibition sectors can still be accessed after the show closed. The app’s interactive 3D-map allows for virtual navigation through the halls, access to information and images of artworks that galleries brought to the show, organizing them as favourites, and forwarding them to friends and colleagues. artbasel.com/apps

Museums in Basel
The museum exhibitions in and around Basel were again exceptional. Both daytime shows and evening events attracted a high number of visitors. The exceptional line-up of shows during Art 43 Basel included: ‘Jeff Koons’ (through September 2, 2012) and ‘Philippe Parreno’ (through September 30, 2012) at Fondation Beyeler; ‘Renoir. Between Bohemia and Bourgeoisie’ at Kunstmuseum Basel (through August 12, 2012); ‘Hilary Lloyd’ at the Museum für Gegenwartskunst (through September 16, 2012); ‘Craigie Horsfield. Slow Time and the Present’ and ‘Paul Sietsema’ at the Kunsthalle Basel (through August 26, 2012); ‘Vladimir Tatlin – new art for a new world’ at Tinguely Museum (through October 14, 2012) and ‘Sofie Thorsen’, ‘Carlos Garaicoa’ and ‘Marc Bauer’ at the Kunsthaus Baselland (through July 15, 2012). For a complete list of museum exhibitions, go to www.museenbasel.ch.

This year’s Art Statements featured strong single-artist presentations from young galleries and artists. Selected by the Art Basel Committee from more than 300 applications, the participating artists come from 19 different countries. The Baloise Art Prize (CHF 30,000 per artist) was this year awarded to Simon Denny (Michael Lett, Auckland) and Karsten Födinger (RaebervonStenglin, Zurich). The Baloise Group also acquired works by both artists and donated them to Hamburger Kunsthalle and MUMOK, Museum Moderner Kunst Stiftung Ludwig, Wien, which will also hold solo
shows for the artists. artbasel.com/statements

Additionally, Theater Basel presented three sold-out performances of ‘The Life and Death of Marina Abramović’, a Manchester International Festival and Teatro Real Madrid production with Theater Basel and the Holland Festival, whose Swiss performances were presented in co-operation with Art Basel.