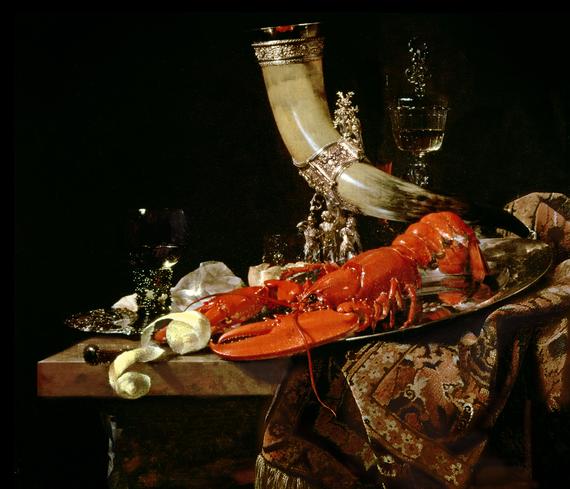 This article titled “Should art be austere in a recession?” was written by Jonathan Jones, for guardian.co.uk on Monday 30th January 2012 16.17 UTC

In around 1653, the Dutch artist Willem Kalf painted a lobster. First he arranged it with various other delicacies and luxuries on a tabletop, ready to be carefully observed and copied on to canvas. The boiled crustacean was placed on a platter on top of a ruffled cloth, with a peeled lemon and a twinkling glass nearby. Over the tempting snack stands a spectacular buffalo drinking horn, embellished with silver.

Kalf‘s painting is a monument to luxury. This is not a depiction of a proletarian meal. Vincent van Gogh’s much later work The Potato Eaters might be seen as a critical riposte to this and other 17th-century Dutch still lives of delicious feasts and snacks. While Vincent was trying to portray the lives of the desperate, Kalf entertained the well-off. The people who paid for paintings like his could surely also afford the actual lobster and the real drinking horn. (The drinking horn is believed to be associated with an Amsterdam archers’ guild, so perhaps this was commissioned for an officer in what was in effect an elite social club.)

I started thinking about luxury in art this morning after reading the Guardian’s readers’ editor on questions about newspaper coverage of food, fashion and gadgets. In times of austerity, should journalists be reviewing the finer things in life – or ignoring them?

Art has an answer. For centuries, painters have depicted the pleasures of food and fashion. And in all that time, not one painting has been eaten or worn (I hope not, anyway). Kalf may have painted his still life for a wealthy merchant, but today anyone can see it, for free, in the National Gallery in London. When we look at it, are we aware of looking at money, at luxury? Do we feel bloated or envious?

Of course not. We look at the glitter of the paint, where Kalf has captured the translucent sheen of glass, at the curving brightness of his lemon peel, the rugged texture of the woven fabric. Up close, dazzling flecks of colour create form. The desirability of depicted objects becomes the self-contained pleasure of paint; the eye replaces all other sensory organs.

Still life is endlessly enigmatic; it is at once a hymn to the physical world and an ethereal replacement of it. Kalf tempts us with what is not there. The lobster was eaten centuries ago. In art, it endures as a frozen feast of redness.

In art, thinking about luxury is not the same as grasping it. Art can imagine everything from a feast to a fast – and yet it is always an idea, an image. This is not confined to artists: it is an aspect of how people think about food and fashion – we don’t necessarily leap from thought to action. Fashion fans do not all have the money to purchase everything or anything they see in a magazine, any more than an art lover has to have the clothes they see on a fabulously dressed person in a portrait. Fantasy is part of looking and thinking.

Leave it to clergymen to blame society’s ills on images of the unattainable. Imagining luxury is as human as imagining want. The real ugliness of the age of austerity would be to limit innocent pleasures, to force misery on the modern mind. It’s bad economics (someone has to buy some stuff if the economy is to grow), and it’s hopeless human psychology. You can’t impose austerity on the imagination.