The finest quality uncompromising cars and skis come together to create the Zai for Bentley Supersports ski. Bentley celebrated their partnership with ultra high-end ski maker Zai in Gstaad, Switzerland with an invitation for a new winter activity – skijoring with a Continental GT. Skijoring is a winter sport where a person on skis is pulled by a horse, a dog (or dogs) or a motor vehicle. It is derived from the Norwegian word skikjøring meaning ski driving.

World champion Franco Moro took to the snowy road on a pair of Zai for Bentley skis reached speeds he’d never seen before behind a horse.

Skijoring features in the 1998 film Silver Wolf, starring Michael Biehn and Roy Scheider. Skijoring was also talked about in the Castle Films short Snow Thrills, pronounced by Joel Robinson as “she-horring” and described by Tom Servo as “A safe and fun way to blow a Saturday…or a knee!” 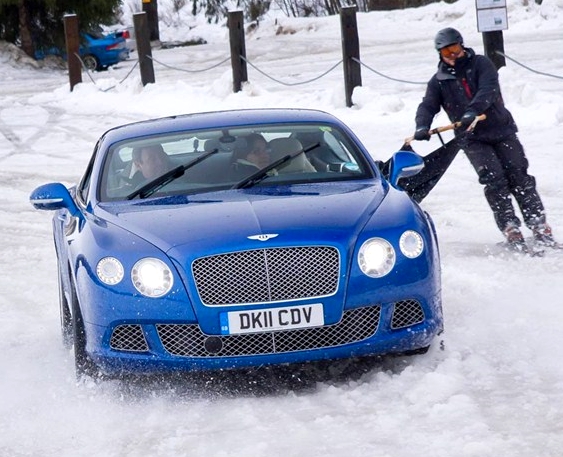