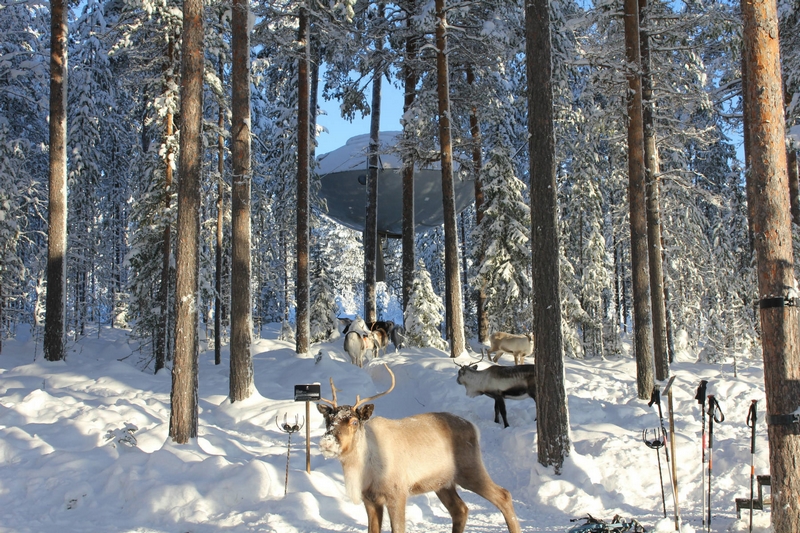 This article titled “From a sensational sauna to a UFO bedroom: 10 amazing Swedish designs you won’t want to miss” was written by Gemma Bowes, for theguardian.com on Tuesday 20th October 2020 13.57 UTC

From the ancient wooden dwellings of the middle ages to the experimental postmodernism of the 1960s, Swedish architecture has charged through countless different styles and eras, bending European trends to its own Nordic context while also creating an independent vernacular.

The country’s architects now frequently lead the field, and a vibrant tradition of modern design has resulted in great experimentation and innovation over recent decades – from spectacular feats of civic engineering to hip saunas and the coolest hotels, all wonderful for the visitor to behold.

These are 10 of the most design-forward buildings and sights for cultural travellers to lay their eyes on:

1. Öresund Bridge, Malmö
A road and railway run parallel across one of the world’s longest cable-tied bridges then, at an artificial island, disappear into an underwater tunnel as if being sucked down a plughole.

This incredible 16km (9.9-mile) structure seems to defy the possibilities of engineering, while creating a valuable trade and transport link between Copenhagen, in Denmark, and Malmö, Sweden’s third largest city. The Öresund Bridge section alone is about 8km (5 miles) long and will be familiar to British TV viewers as the setting for the Scandi-noir drama The Bridge.

2. The Sauna in Frihamnen, Gothenburg
In a land peppered with sleek designer sauna huts, both private and public, which showcase the ingenuity of talented architects, for one to be widely praised by design critics as the country’s most spectacular is quite an accolade. The Sauna in Frihamnen, which opened in a newly fashionable area of Gothenburg in 2015, immediately caused a sensation with its striking metal form, built from rusted corrugated steel. The design made extensive use of other recycled materials, too – 12,000 glass bottles were used in the construction of the changing rooms alone. Happily, it’s free for anyone to use, alongside an outdoor pool by the river in which to cool off.

3. Treehotel, Luleå Swedish Lapland
A global accommodation gamechanger when it launched its treetop cabins in 2010, the Treehotel has come to be one of the most recognisable and lusted-after places to stay in Scandinavia.

Suspended 4-10m above ground in a spectacular Lapland pine forest are seven cabins, individually designed by renowned architects, among them the Swede Bertil Harström, who is the only one to have created two treehouses – the UFO, resembling a flying saucer, and Bird’s Nest, whose exterior is a frenzied mass of sticks and branches.

Guests go cross-country skiing through forest, watch the aurora borealis, kayak, and feast on gourmet meals of wild moose with foraged berries. There’s time, too, for fika picnics, which embrace the Swedish tradition of having a cosy break for coffee and cake with friends.

4. Artipelag, Värmdö
Artipelag, a vast exhibition centre that celebrates art, architecture, Swedish design and food, sits in a natural environment of pine trees, cliffs and magnificent views, about 20km (12.4 miles) east of Stockholm. The aim of the architect Johan Nyrén was to create a building in harmony with its surroundings and the elements. As a result, a crackling fire welcomes visitors into the entrance hall, from where they see seawater glittering through floor-to-ceiling windows. In the cafe and patisserie, a huge rounded gneiss rock protrudes through the floor. Outside, larch boardwalks skip across rocks and water to a sculpture trail through the forest. To make the visit even more special, gallery-goers can travel to Artipelag through the Stockholm archipelago on board a 19th-century ship.

5. ArkNat shelters, High Coast
Every year since 2017, groups of young architecture students have taken to the 130km (81-mile) High Coast Trail in north-east Sweden to design and build beautifully crafted wind shelters and resting places for hikers as part of the ArkNat project. The High Coast, a Unesco world heritage site of granite cliffs and rocky islands, stretches from Hornöberget in the south to Örnsköldsvik in the north. Along the trail it’s a joy to stumble across and take time to appreciate the ArkNat spots, such as Forest Cradle, a curvaceous floating wooden day bed in the forest near Mount Skuleberget. For 2021, the project moves from the High Coast region to the southern county of Skåne to provide a fresh crop of inventive havens along glorious walking trails.

6. Kalmar konstmuseum, Kalmar
One of the country’s most interesting contemporary art museums, the Kalmar konstmuseum, on the south-east Baltic coast, was the result of an architecture competition that attracted almost 300 entrants. The winners, Martin Videgård Hansson and Bolle Tham, envisaged a black cube housing four floors of exhibitions, studios, a library and offices, with views over the sea and the city. In contrast to the dark, wood-clad exterior, the interiors are of smooth, pale concrete where light and shadow play. The Kalmar konstmuseum won Sweden’s most prestigious architecture prize, the Kasper Salin Prize in 2008, its inaugural year.

7. Icehotel, Jukkasjärvi, northern Sweden
There can’t be a traveller on earth who hasn’t heard of the magical Icehotel, 17km (10.5 miles) east of Kiruna and 200km (124 miles) north of the Arctic Circle, which was the world’s first when it opened in 1989, and has reinvented itself extravagantly every winter since. Between October and December each year, dozens of artists and collaborators chip away at ice from the Torne River to form spectacular new suites – one may be full of ice toys, another a frozen winter garden. The newly created ice extravaganzas are available for occupation from mid December this year to the end of March, but one section of the hotel, Ice 365, now remains open year round, using solar energy to freeze rooms. If you can’t fit in an overnight stay, day visitors are welcome at the ice bar and exhibitions.

8. Naturums, nationwide
In many countries, visitor centres at nature reserves tend to be lacklustre prefab cabins devoid of style. Not in Sweden, where 31 design-led naturums (nature rooms) in national parks and nature reserves are examples of architectural brilliance. The centres host activities, exhibitions and provide information about the beautiful areas they inhabit, yet even their own aesthetics are cause for admiration. Naturum Vänerskärgården-Victoriahuset’s facade of wooden strips, for example, was inspired by the reeds and driftwood of its surroundings at Lake Vänern – the EU’s largest lake – and features a hotel, too.

9. Sara Cultural Centre
Not far from the Arctic Circle, the city of Skellefteå is building the Sara Cultural Centre, which, at 20 storeys high, is expected to be the world’s tallest wooden building. Due to open in 2021, the structure will house a theatre, art gallery, museum and the city library. There will be a hotel and a restaurant, too, both of which will have panoramic city views. Designed by architect Oskar Norelius, this futuristic building pushes the boundaries of what can be achieved in timber construction, while at the same time having a low environmental impact thanks the renewable nature of wood. Additionally, its green roof will contribute to thermal insulation, enhance biodiversity and delay rainwater run-off.

10. National Museum, Stockholm
If any building exemplifies Sweden’s ability to pay homage to its past while embracing the future, it’s the National Museum. Opened in 1866, it is not only one of Europe’s best preserved 19th-century museum buildings but one of the most modern thanks to a five-year renovation that was completed in 2018. While the building’s symmetrical facade was restored to its former glory using stone that matched the original, the interior was sensitively updated to allow more of the museum’s vast collection of art to be displayed in a contemporary manner. The museum also gained a glass roof, a lift and a new restaurant that serves classic Swedish cuisine with a modern touch, think elk stew with pickled red carrot or seared cured salmon with cucumber salad.

Welcome to Sweden when the time is right
To discover more about architecture and design in Sweden, head to Visit Sweden were you’ll find even more places you won’t want to miss

Get advice about travelling to Sweden, including the latest information on Covid-19 restrictions at gov.uk/foreign-travel-advice/sweden