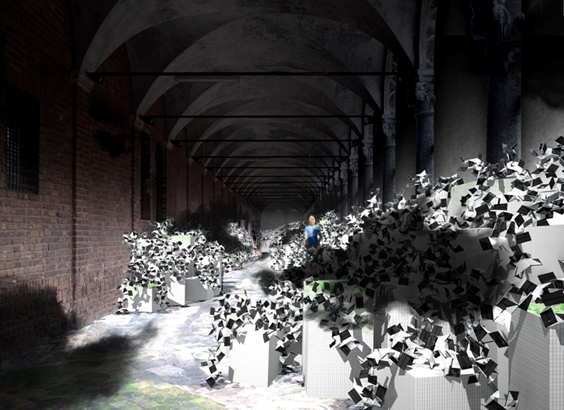 At this year’s Milano Salone del Mobile 2013, one of the largest and most influential design exhibitions in the world, to be held in Milan this April, Panasonic will present a new energy landscape, where energy creation (through solar panels), energy storage (through storage batteries), energy saving (through LED lights), and energy management take a new form in a city environment. The installation this year was again designed by noted architect, Akihisa Hirata.

Based on its years of technological research and development, Panasonic is aiming to realize a sustainable mode of living based on creating, storing and efficiently using renewable energy. This mode of living is applied not just to homes, offices and stores, but to entire towns to create a “sustainable smart town.”

“Here, solar panels are scattered, spreading like plants, on volumes resembling a cluster of buildings that forms a city to create a landscape of hills. Shadows of clouds pass slowly over these “hills,” as if moving atop natural terrain, thus encouraging city residents to regain their relationship with the forgotten sky,” says Akihisa Hirata.

“In the near future, numerous solar panels will cover the roofs of buildings, while changing the scenery of daily life. We believe that we can develop both a system of solar-power generation with the panels in a fixed arrangement and other options that take into account various relationships, such as that involving the pattern of foliage.

We hope future city streets, where the use of natural energy is vital, teem with life by becoming enmeshed with their natural environment,” added Hirata.

Faced with environmental issues, rather than viewing nature and human society as irreconcilable opposites, by shifting to a high aerial perspective we may see our cities as part of the planet and firmament. By equipping cities with solar panels that merge seamlessly with nature, we embrace a hybrid vision of mutual health brimming with life force. Panasonic presents “Energetic Energies”, a new dynamic between nature and the city.