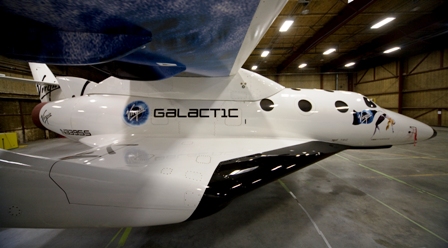 Virgin Galactic, the world’s first space tourism company, will establish its second base in Abu Dhabi. Virgin Galactic CEO George Whitesides appointed Steve Landeene, an executive director of the Spaceport America project (from 2007 to 2010), with the task to build a Spaceport Abu Dhabi.

The announcement came at the Global Aerospace Summit in Abu Dhabi, at which George Whitesides announced the construction of a “space port” in the Middle East to mirror the space center being completed by Virgin Galactic in the USA. The New Mexico spaceport will be finished in about 12 months and sub-orbital flights will likely start in 2014.

“Just as the Apollo programme inspired youngsters to want study maths and science, we want to inspire the next generation of would-be astronauts,” Whitesides said.

“Perhaps one day we will see a future generation of our spaceships fly from here in Abu Dhabi to New Mexico in no more than an hour,” he said.

Virgin Galactic received this year its 500th customer deposit. A single space flight ticket around the Earth will cost US$200,000. Virgin Galactic has a potential future revenue of around US$100m.

Sultan Al Dhaheri, tourism and corporate planning section head at Abu Dhabi Tourism & Culture Authority, said: “It’s great news all round – from an investment perspective and from a tourism perspective.

“It will heighten awareness of the emirate and bring tourists here – and also on the aviation front, it will help establish the emirate’s growing aerospace credentials – all of which is in line with the Abu Dhabi 2030 plan.