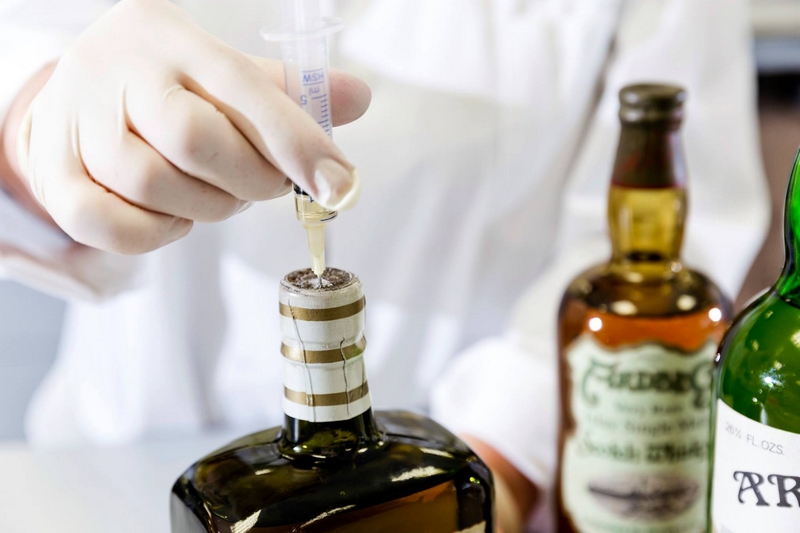 A whisky dealer has warned that the rare whisky market has been flooded with fakes after laboratory tests found one-third of samples were counterfeit.

The Scottish Universities Environmental Research Centre (SUERC) found 21 out of 55 bottles of allegedly vintage scotch whisky, some apparently worth tens of thousands of pounds, were either fake or were not distilled in the year claimed.

The fakes included one purporting to be a bottle of Ardbeg 1885, a single malt; a rare Thorne’s Heritage early 20th century blended whisky; and an Ardbeg malt allegedly bottled in the 1960s.

The samples were supplied by Rare Whisky 101, a dealer in vintage and high-value whiskies, after it noticed a spate of fraudulent and counterfeit rare malt whiskies being offered to dealers and auction houses.

Last year, a dram from a bottle purporting to be an 1878 Macallan single malt bought for £7,600 at a Swiss hotel by a Chinese millionaire was exposed as a fake by Rare Whisky 101, a Scottish alcohol analysis company and a laboratory at the University of Oxford.

The rare whisky market is booming worldwide, with distillers investing heavily in new facilities. Based on the number of fake bottles found in the recently tested sample, this suggested £41m worth of “rare” whisky circulating worldwide was fake, the company said.

He acknowledged this evidence raised doubts about his industry but said it was essential the rare whisky trade tackled this issue voluntarily, before it caused long-lasting damage to customer confidence. Simpson said some fakes could harm human health, using adulterated or toxic ingredients, while buyers were being duped.

“I have bought fake whisky in the past and it’s particularly horrific when you find you’ve paid money for something and it is not what it says,” he said. “People are burying their heads [saying] it’s not an issue. It genuinely is an issue.

Simpson said it was not yet clear what systematic checks would work since the only accurate way of testing a whisky at present was to open the bottle and subject the liquid to chemical testing or the carbon testing techniques used by the Scottish centre.

However, opening the bottle destroyed its value, making it impossible to prove its provenance while ensuring it could be sold on if it was found to be genuine. It would need the police or food safety authorities to tackle the problem, he said, by tracking a fraudulent bottle to its source.

Prof Gordon Cook, the head of the SUERC radiocarbon lab, said it had built up a new database of whisky samples, many supplied by distillers, which enabled the researchers to test and crosscheck samples accurately. Not all were fake, he added.

“Recently, we have analysed four bottles of early whisky, purported to have been distilled between the mid-19th to the early 20th century, for members of the general public. Of these, three were genuine, so there are really old and rare whiskies in existence,” Cook said.