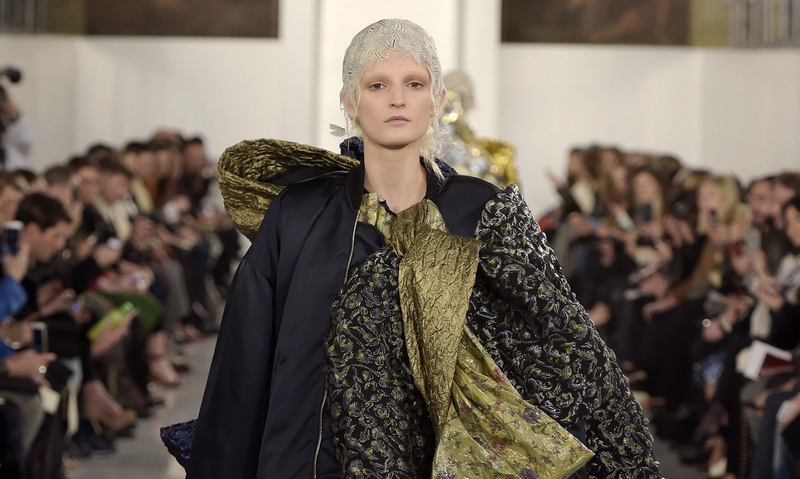 In the light of Oxfam’s recent report that 62 individuals own as much of the world’s wealth as the poorer half of the global population, the Paris haute couture collections hawking six-figure cocktail dresses embellished with gold leaf or mink trim make a twisted kind of economic sense.

Related: From the joy of capes to the great tights uprising: seven style lessons from couture

John Galliano’s Martin Margiela Artisanal collection, however, is less easy to explain. It is an official haute couture catwalk show, held in an imposing gallery of the Hotel des Invalides to a tinkly, Parisian cafe-society soundtrack. As with the other shows, the prices are kept discreet, presumably lest word of them should spark a revolution. And yet these are definitively not clothes designed to appeal to the super rich, being as much about rags as they are about riches.

The philosophy of the house founded by Martin Margiela is about unpicking and exposing how fashion works, rather than using it to brandish wealth and power.

“The humble gesture of tearing paper” was the starting point for this show, which started with white skirt suits, each of which had a section torn out and replaced with a different texture: paper, first, then lame velvet. There was an idea here about how a garment takes on the personality and the meaning of the textile it is made of.

Next came contrasts in how fabrics are treated and finished, and how that affects how we read them. So there was neat, close-pleated triple georgette one minute, followed by exquisite jacquard with raw, violently ripped edges, followed by leather hole-punched into delicate mesh. An exquisite dress was draped down the front of a model’s body, cinched with a belt and leaving her legs bare at the back: a ballgown, worn as a worker’s apron. (“Decorative surfaces migrate across utilitarian elements”, according to the show notes.)

Even the faces of the models were fractured. A glossy stencil of a red lipped mouth appeared on one model’s throat, and over another’s eye. The models’ actual mouths, meanwhile, were painted blue or black. Long hair was threaded with feathers and gemstones until it glinted like a magpie’s nest. It was original, strange, and surprisingly beautiful.

The strangest part of all? The sales figures. Revenues at Maison Margiela have increased by 30% in the past year, since the arrival of John Galliano. Renzo Rosso, owner of Diesel as well as Margiela and the man who gave Galliano the job, says that the couture collection is now the engine of growth at the company, defining the image of the house and setting the agenda for other collections. Plans for handbags and a new perfume are in process, CEO Giovanni Pungetti told Womenswear Daily recently.