The 2021 list of Asia’s 50 Best Bars was announced over a virtual awards ceremony last week. Featuring bars from 10 countries in Asia, the sixth edition of the annual awards aims to recognise the immense talent, dedication and resilience evident across Asia’s cocktail landscape. Given the devastating impact the global pandemic has had on the region’s bar scene, 50 Best’s role in championing great bars is more important than ever, as the organisation looks to inspire guests to return to bars through its lists and surrounding content programmes. 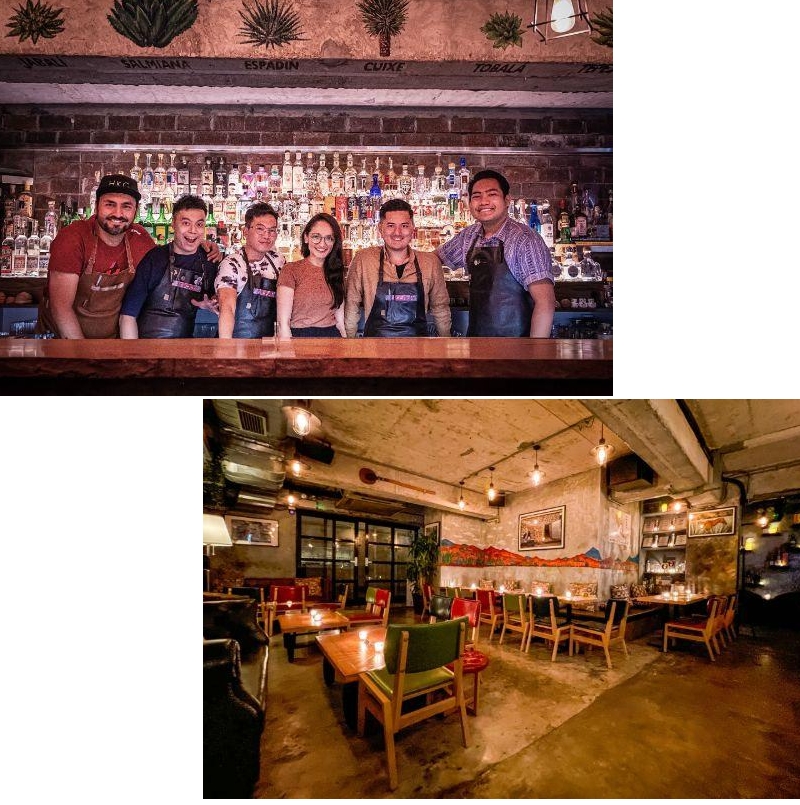 Launched in 2017 by bartender-owner Jay Khan, Coa is a shrine to all things agave and houses an extensive
collection of 200 handcrafted Latin American liquids including tequila, mezcal, raicilla, sotol and more. Khan, who
was voted Bartenders’ Bartender at Asia’s 50 Best Bars 2020, is particularly well-versed in the category of agave
spirits and is always happy to educate guests while they sip on expertly crafted cocktails from his standout menu.
The Mexicana drinking den first debuted on the Asia’s 50 Best Bars list in 2019, winning the Highest New Entry
Award at No.12, and was ranked No.3 last year. Coa’s meteoric rise continues on a global scale as 2020 saw it
place at No.8 at The World’s 50 Best Bars, securing the Highest Climber Award.

“We hope that the announcement of the 2021 ranking – as well as the publication, for the first time, of those ranked from 51 to 100 – will provide optimism and encouragement to all bars as travel routes gradually open up and guests begin to plan their next fine-drinking experiences. It is a well-deserved debut win for Coa and credit goes to Jay Khan and his team who have proven themselves to be at the heart of the continent’s cocktail culture. The bar serves a perfect blend of subtle agave education, relaxed vibes and a simply fantastic drinks list. This, combined with the great work they have been doing to support their community throughout the pandemic, makes Coa a bona fide No.1 this year.” – Mark Sansom, Content Editor for Asia’s 50 Best Bars.

For 2022, 50 Best announced that it has confirmed its partnership with the Singapore Tourism Board to bring the Asia’s 50 Best Bars awards ceremony back to Singapore.

Sansom says: “We look forward to holding a physical awards ceremony not only to celebrate and recognise the best in the business when the situation improves, but to bring together bartenders, bar owners, drinks writers and cocktail aficionados from around the world. We are hopeful that the ongoing vaccine roll-out will allow the bar community to take this opportunity to reunite in Singapore next year.”

A total of 13 bars made the list this year from China, including Hong Kong. Climbing two spots to clinch the No.1
position is Coa, which also wins The Best Bar in Asia and Best Bar in China awards, sponsored by Perrier. Other
ranked bars in Hong Kong include Caprice Bar (jumping 24 places to No.10 and joint winner of the Nikka Highest
Climber Award), and newcomers The Diplomat (No.20 and winner of the London Essence Best New Opening
Award), Tell Camellia (No.23), Penicillin (No.30 and winner of the Ketel One Sustainable Bar Award), and Darkside
(No.40). Also from Hong Kong, Quinary (No.25) is named the Heering Legend of the List; The Pontiac jumps nine
spots to No.26; while The Wise King secures the No.28 spot. Shanghai is represented by three bars: Sober
Company (rising seven places to No.5), Union Trading Company (a re-entry at No.31) and Speak Low (No.32).
Hope & Sesame in Guangzhou jumps an impressive 21 places to secure the No.15 spot.

Ranked No.11 is Bangkok’s The Bamboo Bar, which is also named The Best Bar in Thailand, sponsored by Bellino.
Rising two spots to No.22 is Tropic City; Backstage Cocktail Bar is placed No.35; Vesper secures the No.46 spot,
while Teens of Thailand re-enters the list and takes the No.48 spot.

Winning The Best Bar in Taiwan, sponsored by Asahi Super Dry, and coming in at No.4 is Indulge Experimental
Bistro in Taipei. Also on the list are Bar Mood (No.17), Room by Le Kief (rising eight places to No.19), and Aha
Saloon (No.24).

Jumping 16 places to No.13 and winner of The Best Bar in Korea, sponsored by Tia Maria, is Charles H in Seoul.
Bar Cham advances 16 spots on the list to No.34, while Alice moves up six places to No.41 and Le Chamber also
rises up the ranks to No.44.

The Best Bar in Malaysia, sponsored by Rémy Martin, is awarded to Bar Trigona, Kuala Lumpur, at No.12.
Junglebird and new entrant Three X Co are also included at No.37 and No.47 respectively.

Other special awards announced in the run-up to the ceremony were: MO Bar, Singapore, as the Michter’s Art of
Hospitality Award winner; Epic, Shanghai as the Campari One To Watch; Penicillin, Hong Kong as the Ketel One
Sustainable Bar Award winner; and Bannie Kang, of Mu, Taipei, as the Mancino Bartenders’ Bartender 2021.

MO Bar, Singapore, takes home the Michter’s Art of Hospitality Award, and secures the No.45 spot. Located within
the Mandarin Oriental Singapore, MO Bar takes great effort to personalise its guest experience. Visitors to the bar
receive a bespoke programme of ‘treats’, which not only add a sense of theatre, but also shows patrons how valued
their custom is.

Epic, Shanghai (No.64 on the 51-100 list), is named the Campari One To Watch, an accolade presented to a
rising-star bar selected by the organisers of Asia’s 50 Best Bars as having the potential to break into the list in the future. The venue is founded by Cross Yu, who travelled extensively while learning the craft of bartending before returning to Shanghai to launch a bar with an international flavour, yet rooted in an authentic Chinese spirit.

Penicillin, Hong Kong, wins the Ketel One Sustainable Bar Award and takes the No.30 spot. Opened at the end of
2020 by Agung Prabowo and Roman Ghale – the founders of The Old Man Hong Kong – and their respective
partners Laura Prabowo and Katy Ghale, Penicillin offers innovative cocktails made using locally sourced
ingredients that are obtained through foraging and from local farmers and suppliers. The bar also places huge
emphasis on repurposing and recycling ingredients, using commonly discarded coconut bark, used tea leaves and
oxidised wine in its concoctions.

Bannie Kang, co-founder of Mu in Taipei (No.90 on the 51-100 list), wins the Mancino Bartenders’ Bartender Award.
Undoubtedly one of the most respected bartenders in Asia, Kang’s impeccable technique, work throughout the
pandemic and desire to make a positive impact on the bar community mark her as a preeminent bartender in the
continent. She persistently seeks out fresh information, ingredients and styles, which influence her Western and
Southeast Asian cocktails at Mu.

Quinary, Hong Kong, wins the Heering Legend of the List Award and comes in No.25. Headed up by Antonio Lai,
who runs a range of top watering holes in Hong Kong, the bar aims to challenge cocktail perceptions and create a
multi-sensory experience for guests.

Shingo Gokan is named the Roku Industry Icon. For this award, the voting academy is asked to give the name of one
person who has done more for the progress of the bar industry than any other individual. Mixing the bartending styles of his native Japan and New York City, Gokan has made a name for himself in bars and cocktail competitions
around the world. A fearless bar leader, Gokan has helmed many notable bars and owns a handful of award-winning
establishments, namely The Odd Couple, Speak Low and Sober Company in Shanghai, China, and The SG Club in
Tokyo, Japan.

The Diplomat, Hong Kong, is named London Essence Best New Opening and clinches the No.20 spot. The
brainchild of award-winning mixologist John Nugent, who is known for his innovative twists on classics, this highly
stylish and Instagrammable bar offers excellent food, classic cocktails and an eclectic playlist.

Caprice Bar, Hong Kong, and Sidecar, New Delhi, are jointly presented with the Nikka Highest Climber award,
climbing 24 spots to place No.10 and No.16 respectively. The former is known for its fine selection of wines and
cheeses as well as stunning views of Victoria Harbour – standout is the Caprice Martini made with Jura yellow wine
served with a side of 48-month aged Comte cheese. The latter, run by Yangdup Lama and Minakshi Singh, offers a
robust menu of craft cocktails, mixed with house-made bitters and syrups. Try a G&Tea, for a smoky gin and tonic, or a Yang’s Old-Fashioned which employs betel nut-infused bourbon.

No Sleep Club, Singapore, secures the Disaronno Highest New Entry Award and ranks No.8. Headed by bartenders
Juan Yi Jun and Jessica Hutchinson, the all-day bar and restaurant exudes a welcoming laid-back ambience and is
known for its selection of innovative cocktails, such as Hay & Apple, as well as repurposing surplus ingredients from its kitchen.

The annual list of Asia’s 50 Best Bars is created from the votes of the Asia’s 50 Best Bars Academy, an influential
group of 220 leaders made up of bartenders, bar owners, drinks writers and cocktail aficionados. In previous years,
each Academy member voted for seven bars, with at least two of these from outside their home country. With travel
restrictions in place throughout 2020, voters had limited travel opportunities. Consequently, this year voters
nominated a total of five bars, including up to four from their home country. 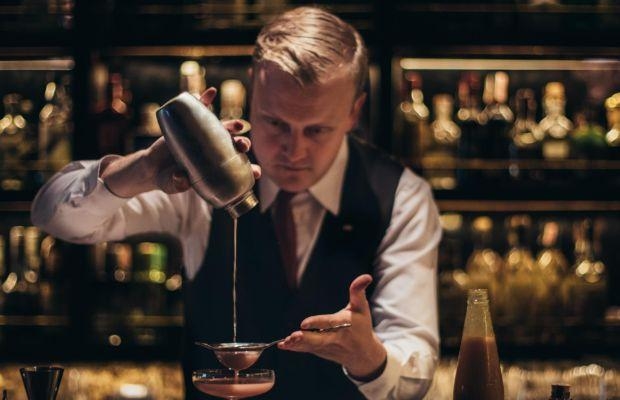 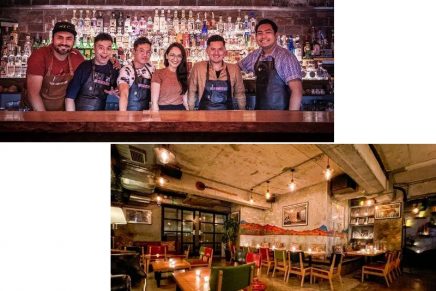 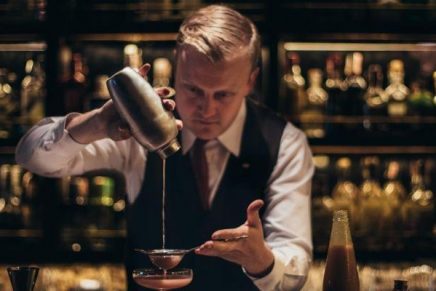 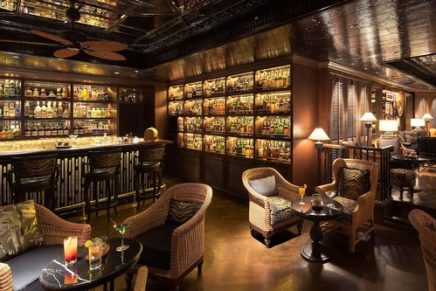 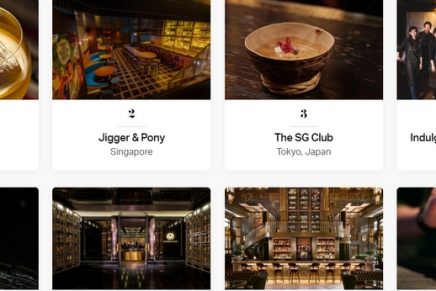