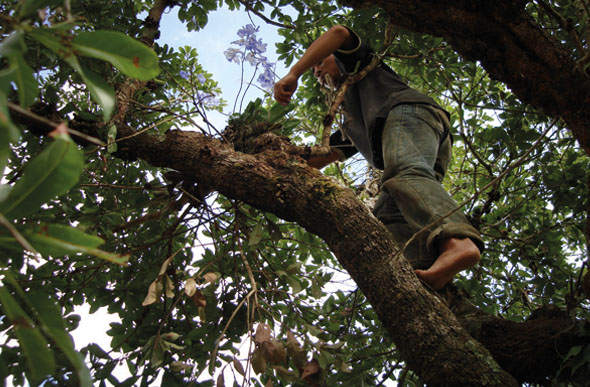 Enchanting and magical power of orchids are studied a unique research center in the world: Guerlain Orchidarium. High in the jungle treetops in Yunnan province in southern China, the Vanda Coerulea orchid is flowering again, a sign that biodiversity in flourishing afresh in the Tianzi Exploratory Reserve after years of intensive single-crop farming.

Vanda is a genus in the orchid family (Orchidaceae) which, although not large (about fifty species), is one of the most important florally. This genus and it allies are considered to be the most highly evolved of all orchids within Orchidaceae. The genus is very highly prized in horticulture for its showy, fragrant, long lasting, and intensely colorful flowers.

The Guerlain Orchidarium, a unique research platform dedicated to orchid, contains three entities: an Experimental Garden in Geneva, a Fundamental Lab in Strasbourg and an Exploratory Reserve in Tianzi.

The French luxury house has set an area of 600 hectares in Yunnan to study orchids in their natural environment. Then, in Switzerland, the superflowers are studied, multiplied, tested and than the best are selected to serve as raw material for the famed “Imperial Orchid” skincare range, first introduced in 2010.

Lead by Francois Gerard, ethnobotanist, program manager of agricultural research at Guerlain, this project proposes to study orchids, their incredible diversity and scientific potential in the world of beauty products.

“Orchids are virtually immortal, he says, the flowers are able to survive in the Arctic – 40 degrees conditions, near the sea or even in the gardens of Ile de France. This secret of longevity determined Guerlain to be interested in these flowers and lead to the creation of the Orchidarium in 2010.”

Guerlain has been following a policy of “jungle farming” on the Yunnan’s nature reserve. This commitment to nature has also made it possible for the Bulgang, the inhabitants of this region straddling the border of Burma and Laos, to re-establish a viable local economy.