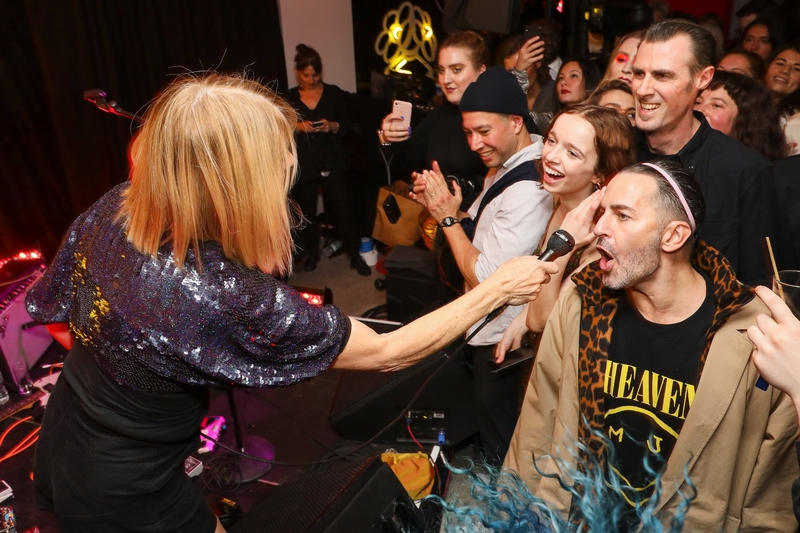 Representatives for the group, which split in 1994 following the death of frontman Kurt Cobain, claim that Marc Jacobs’ unauthorised use of “Nirvana’s copyrighted image on and to promote its products is intentional”. The suit claims that the use of Nirvana’s iconography, which the group has used since 1992, is to “make the ‘Grunge’ association with the collection more authentic”.

A representative for Nirvana said Dave Grohl and Krist Novoselic had no further comment. The Guardian has contacted representatives for Marc Jacobs.

The suit also cites the use of Nirvana references in Marc Jacobs marketing materials, including a meme posted to the brand’s Tumblr account featuring a clip of the group’s 1991 hit, Smells Like Teen Spirit, and an image of Jacobs wearing a T-shirt above the words Come As You Are, the title of a 1992 hit by the trio.

The suit describes Marc Jacobs’ actions as “oppressive, fraudulent and malicious” and claims that they “have caused Nirvana to suffer irreparable injuries” and “threaten to dilute the value of Nirvana’s licenses with its licensees for clothing products”.

The department stores Saks Fifth Avenue and Neiman Marcus are also included in the suit for selling the items that allegedly infringe the band’s copyright. The group is seeking monetary damages, the removal of sale of any such items and the removal of Nirvana references from promotional materials.

Nirvana’s iconography is subject to regular bootlegging: the hoodies found on market stalls worldwide are seldom licensed items. The group would be unlikely to pursue these vendors because of the low possibility of recovering significant damages, says Alexander Ross, a partner at music lawyers Wiggin LLP.

“Suing a major brand for alleged infringement, however, makes more sense from a financial perspective, and for PR and scale purposes, assuming of course that the action is successful,” says Ross. “It also sends a message to other players in the fashion industry that the IP in question is jealously guarded against infringement.”

In 1992, at the height of Nirvana’s fame, Marc Jacobs was fired from designer Perry Ellis after showing his infamous grunge collection, which mixed plaid, silk and skull caps. “Grunge is anathema to fashion,” said American fashion critic Cathy Horyn. Jacobs started his own line a year later, launching his debut collection in 1994.

The Nirvana suit is the latest controversy to hit the designer. “The label is turning out clothes and accessories that lack a compelling point of view, failing to generate the excitement created by younger peers Alexander Wang and Joseph Altuzarra,” New York Times reporter Steven Kurutz wrote in June. Kurutz cited luxury goods research by Exane BNP Paribas that estimated the brand had been losing more than £45m annually over the past few years.

By contrast, the value of band merchandise continues to grow, becoming increasingly important to artists’ revenue streams following the decline of physical media and the impact of streaming on the market.

Related: Marc Jacobs: ‘I have the word Shameless tattooed on my chest’

Partnerships between bands and fashion houses have proven lucrative, such as Canadian rapper Drake’s collaboration with winter wear brand Canada Goose. Official artist merchandise can attain the status of high fashion, a charge led by the designs produced for Kanye West’s tour in support of his 2013 album Yeezus.

The market for vintage band T-shirts is also booming. In 2011, an anonymous Australian buyer spent $10,000 on a Led Zeppelin T-shirt from the group’s 1979 gig at Knebworth.