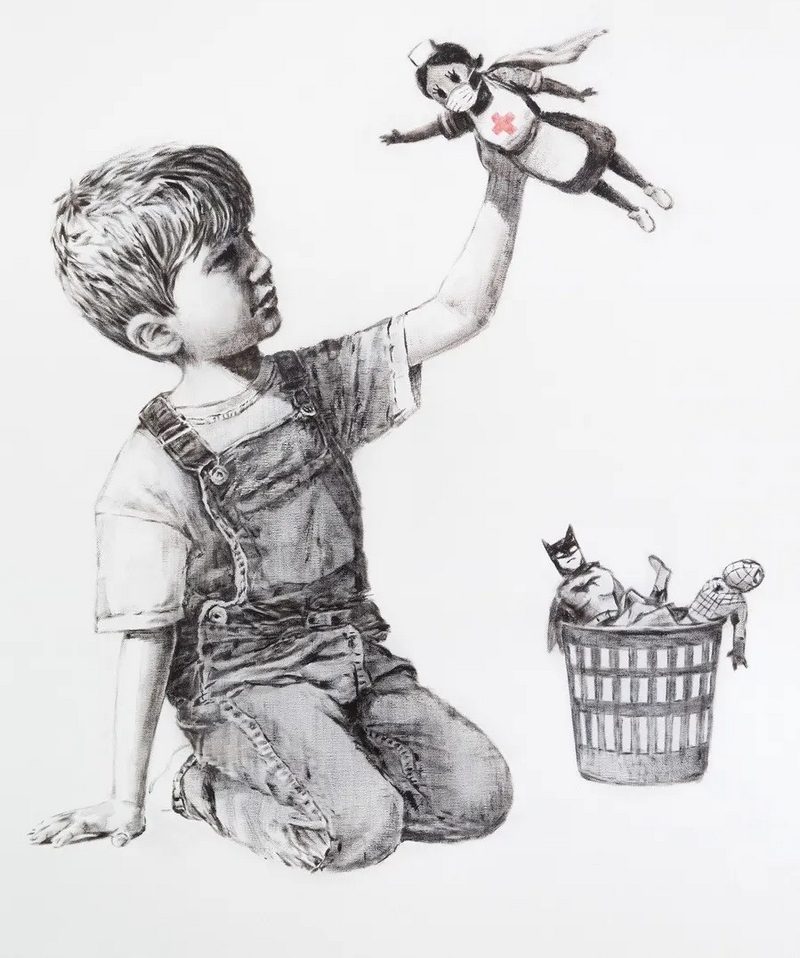 This article titled “New Banksy piece celebrates superhero health workers” was written by Steven Morris and agency, for The Guardian on Wednesday 6th May 2020 18.08 UTC

He may be best known for his comic and subversive street art, but Banksy has been working within the constraints of lockdown to produce a more intimate piece paying tribute to the NHS.

The elusive artist has created a piece called Game Changer that has gone on display, nicely framed, in a corridor at Southampton general hospital.

It shows a boy dressed in dungarees playing with a nurse superhero toy, with figures of Batman and Spider-Man discarded in a bin.

The nurse, wearing a face mask and a white apron featuring a red cross, has her arm raised as if she is flying, with a cape fluttering behind her.

Banksy left a note for hospital workers, saying: “Thanks for all you’re doing. I hope this brightens the place up a bit, even if it’s only black and white.”

After lockdown measures are lifted, the piece – which is approximately one metre square – will be put on public display. It will then be auctioned to raise money for NHS charities, a spokeswoman for Banksy confirmed.

Paula Head, the chief executive of University Hospital Southampton NHS foundation trust, said: “Here at Southampton, our hospital family has been directly impacted with the tragic loss of much loved and respected members of staff and friends. The fact that Banksy has chosen us to recognise the outstanding contribution everyone in and with the NHS is making, in unprecedented times, is a huge honour.

“It will be really valued by everyone in the hospital as people get a moment in their busy lives to pause, reflect and appreciate this piece of art. It will no doubt also be a massive boost to morale for everyone who works and is cared for at our hospital.”

The piece is Banksy’s second during lockdown. The first featured graffiti images of rats wreaking havoc in his bathroom. He shared it online with the caption: “My wife hates it when I work from home.”