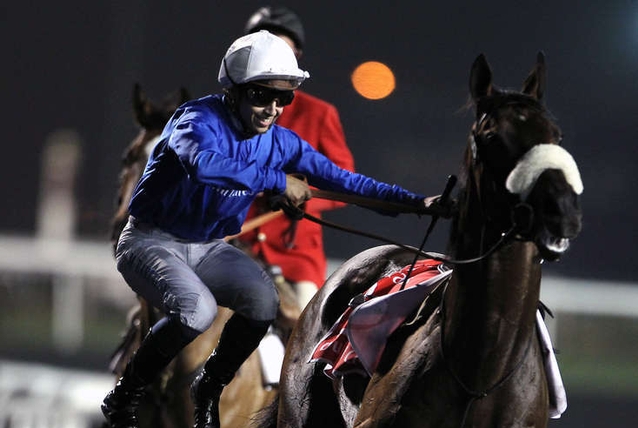 The normally restrained Ruler of Dubai Sheik Mohammed bin Rashid Al Maktoum was very exited. His stable had not won this showcase since 2006. The crowd of Emiratis cheered and waved UAE flags.

“I feel over the moon,” Sheik Mohamed told The Associated Press. “We haven’t won this race for many years. It was a pleasant surprise really. We had as good of a chance as anyone but we are at home and training here. I’m very happy we won after so many years.”

Sheik Mohammed wrote on his facebook page: “Excited about the victory of Monterosso in Dubai World Cup .. We present this victory to all people in UAE & to all those who love to be no. 1 .. Dubai World Cup has become a leader in the horse racing world .. The level of international participation was unprecedented.”

“This is like football. You don’t want someone from outside to beat you. It’s the same feeling,” Monterosso trainer Mahmoud al-Zarooni said. “I’m very happy I won in my country. I’m happy for all the UAE people who were waiting five years for Godolphin to win the World Cup.”

“I couldn’t believe it when no one was coming after me,” Barzalona said. “This is a dream. I have no words to describe what I feel right now.”