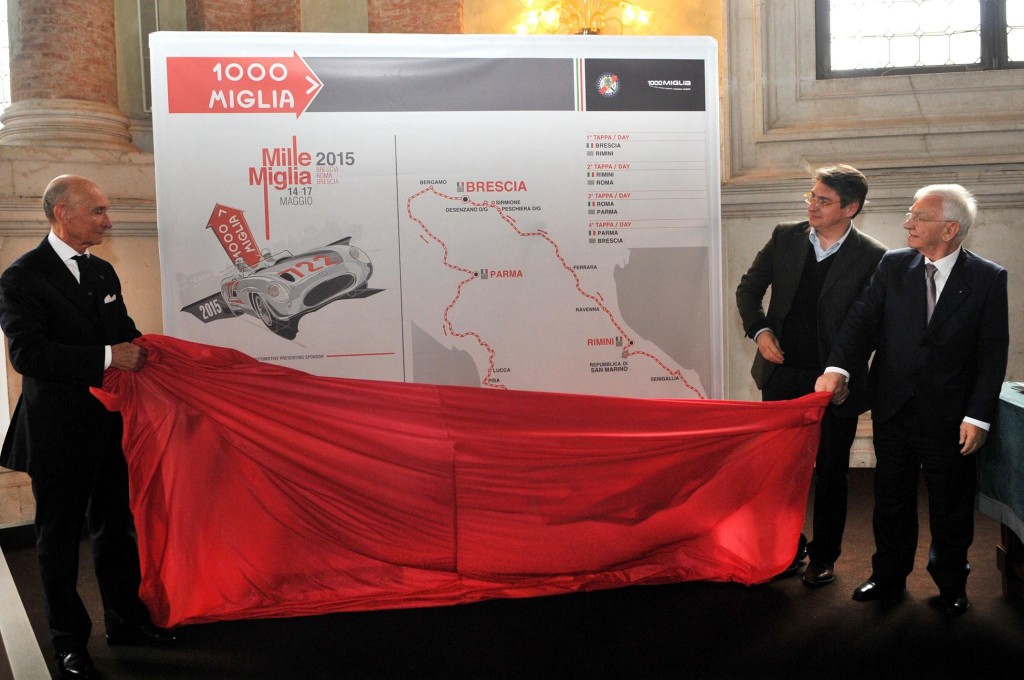 Mille Miglia (14-17 May, 2015), “the most beautiful race in the world” has preserved the romantic yet adventurous spirit of the very first motor races. For 30 years, Mille Miglia has been bringing together exceptional personalities to the world of sport. In 2015, following the positive experience of 2014, the Mille Miglia will be raced over four legs in four days. As always, Mille Miglia 2015 designed the race along the magical scenery of Italian territory, going from Brescia to Rome and then back again.

This decision has significant repercussions on the whole programme and route, meeting with the enthusiastic approval of the public in 2014. The extra leg, giving more time for the public to watch the race, allowed more people to witness the 435 competing cars as they passed: in particular, the people of Brescia showed their appreciation as the arrival had been moved from Saturday evening to Sunday lunchtime, allowing entire families and children to cheer the cars over the finish line.

In the 2014 edition, changes had been made to the route so the Mille Miglia could once again pass through towns which had not seen it for years. This year, in keeping with the same philosophy, a number of changes have been introduced.

The departure of the first leg has been brought forward to the early afternoon of Thursday 14 May and will end in Rimini. The following day, the second leg will see the competitors drive to Rome to arrive, as is tradition, on Friday evening. 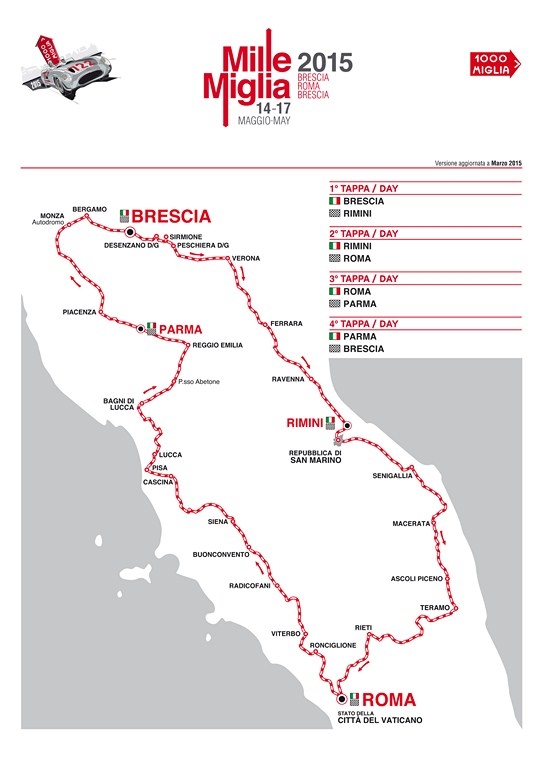 On Saturday 16 May, the route from the capital will remain more or less the same as far as Tuscany. After Pisa and Lucca, following the route taken by the Mille Miglia in 1949, the cars will cross the Cisa Pass, reliving the legendary climb of Clemente Biondetti and Ettore Salani in their Ferrari 166 MM, who later arrived victorious in Brescia.

The third leg will end in Parma: the competitors will then leave from here on Sunday morning for Brescia, where they will arrive around lunchtime, a decision which met with unanimous approval last year.

On 7 May 2015, one week before the event, Mille Miglia will contribute to the “branding” of the Italian Pavilion at Expo Milano 2015, as that evening the auditorium will be the venue of the premiere of the film “Rosso Mille Miglia“, which will convey the emotions and magic experienced by the protagonists of “the most beautiful race in the world” to cinemagoers in Italy and around the world.

“Rosso Mille Miglia” plot is based on 2014 Mille Miglia and encompasses eighty-five years of the race, from early 1930s to the present day, mixing life, memories, mystery and excitement of its characters who are brought together by the love for cars and separated by long-time secrets. They are fascinated by the presence and the story of a fabulous OM 665 Superba – a car built in Brescia, who won the first edition in 1927 – taken to pieces and forgotten for so many years.

Leading actors are Martina Stella and Fabio Troiano. Along with them, Remo Girone, Francesca Rettondini, Victoria Zinny, Maurizio Francone, Rosario Petix and Lyudmyla Bikmullina, as well as vintage cars, drivers and thousands of fans involved in the shooting during the 2014 Mille Miglia. 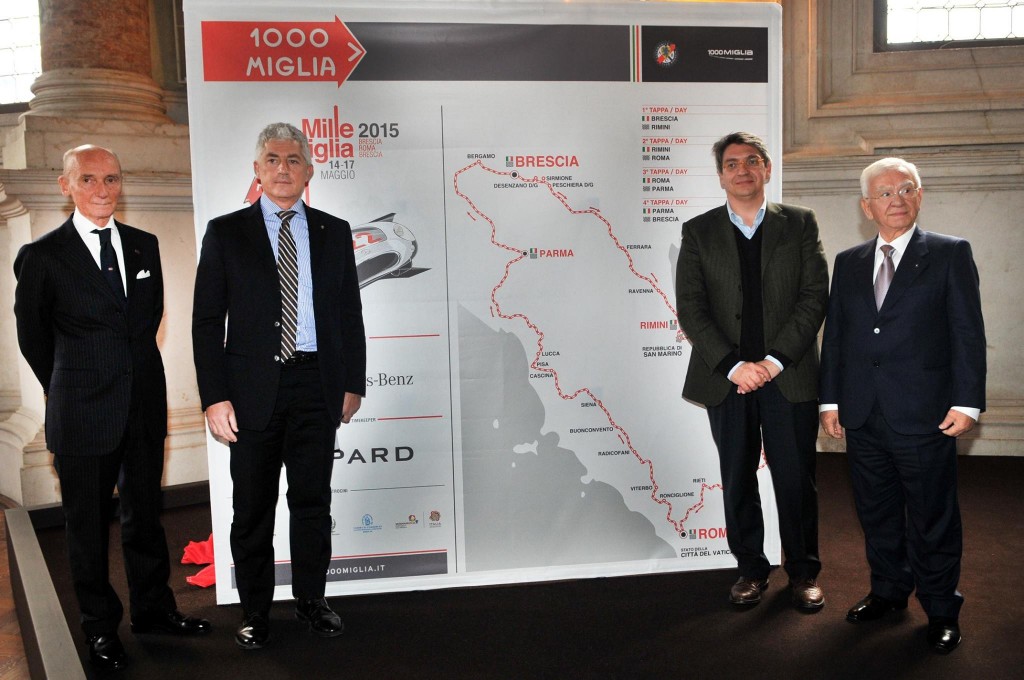 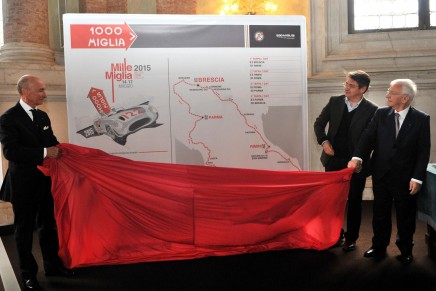 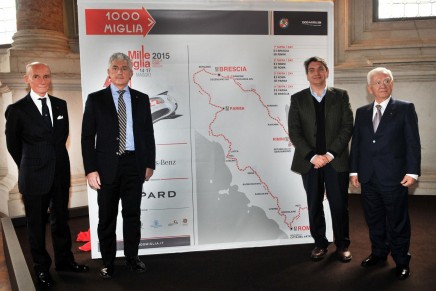 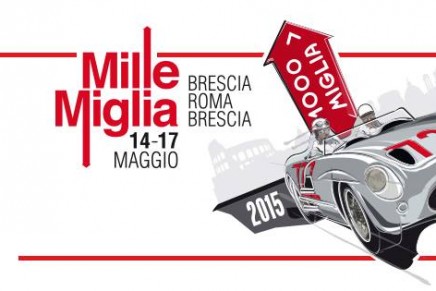 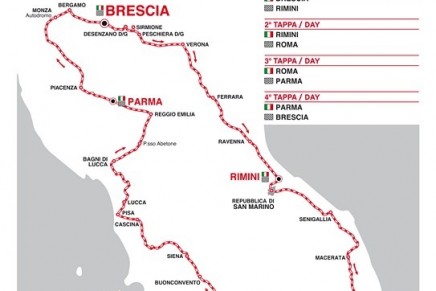