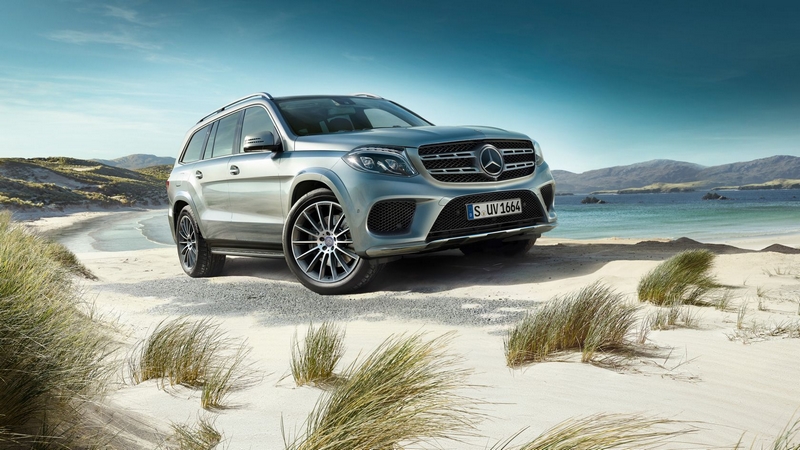 This article titled “Mercedes-Benz GLS: ‘A cross between a first-class lounge and fantasy farm vehicle’” was written by Martin Love, for The Observer on Sunday 7th October 2018 05.00 UTC

Gavin is 6ft 7in and 18st. He’s what you might call a “big boy”. He has a wonderful booming laugh, and a seemingly endless collection of garish Hawaiian shirts. Everything about him is large, loud and gaudy. My friend’s size is a constant source of discussion and comment (usually negative) and I sometimes wonder what life must be like for him. Now, having spent a week in the galumphing Mercedes-Benz GLS, I think I have an idea what it’s like to walk in his (size 15) shoes.

The Benz, too, is a big boy. More than that, it is titanic, elephantine, Brobdingnagian (good word, eh!)… Even more than that, it’s absurd. It is large enough to be a van or a truck or a village hall. But, it’s not, it’s just a laughably outsized car. It’s the kind of vehicle in which you have to plan your journey and envisage your endpoint before you start. If it involves narrow lanes, city streets or a multi-storey, you’ll wince and take an Uber instead. It’s just not worth the stress. Driving the GLS feels like being in a mobile traffic-calming device or a movable roundabout. Everyone else has to slow down and take avoiding action.

The GLS isn’t actually a new car. It’s a facelift of the old Mercedes GL. But it’s not had one of those discreet, nip-and-tuck, years-off procedures; it’s had the kind of face rethink that leaves your ears flapping round the back of your head and your hairline starting where your eyebrows used to be. Adding the letter S to the GL propels the GLS to the pinnacle of the Mercedes sports utility grid: it is now the “S-Class of SUVs”. Supremely luxurious and lavishly endowed with oodles of power and off-road ability, the GLS straddles that awkward midpoint between first-class lounge and fantasy farm vehicle.

From the outside it’s hugely intimidating. It’s as a wide and high as a Range Rover, but 6in longer, too. It weighs in at almost 2.5 tonnes. Step inside and you find yourself embraced in a world of leather and chrome. As you could have guessed, it’s preternaturally comfortable. It skims unruffled over the most tortured of tarmacs; potholes become mere pimples to be squished by its all-conquering 21in wheels. It is so roomy inside that you have to shout to the people in the back seats. Behind them there is another row of seats. But they’ll never hear you back there. The third-row is controlled by a single button. The seats flatten and open effortlessly.

The bestseller (not that this car will sell in huge numbers, that’s the only figure that is relatively small with the GLS) will be the 3-litre V6 diesel with 258bhp. If you want to go faster, you can get an AMG variant with a twin-turbo 5.5-litre V8 producing 577bhp that will do an insane 62mph in 4.6 seconds and top out an electronically limited 155mph. If you opt for the AMG Driver’s pack this top speed can be increased to 168mph. But why would you do that?

It comes with adaptive air suspension, LED headlights, panoramic sunroof, sports braking system, 360-degree camera, heated seats all round and a very loud Harman Kardon sound system. It’s amazing, but sooner or later, we’ll all end up paying for this sort of unfettered excess. The car is epic in dimension and ability, but it’s stunted in terms of its awareness of its place in our world.