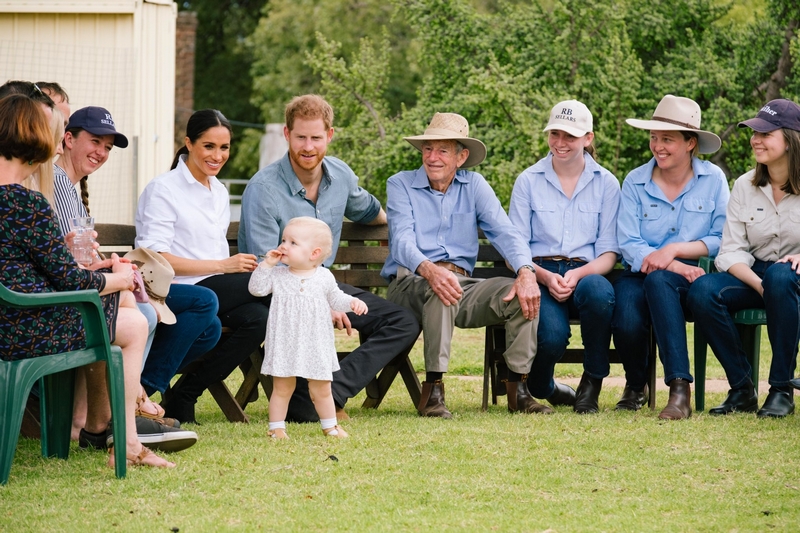 This article titled “Meghan’s maternity wardrobe: what does a modern duchess wear?” was written by Jess Cartner-Morley, for The Guardian on Tuesday 16th October 2018 12.22 UTC

Being modern is Meghan’s USP. She is the modern duchess, hauling the royal family into the 21st century with her artisan elderflower cakes and feminism and cross-body bags. And now, with The Happy News, Meghan is navigating a very 21st-century challenge: how a thirtysomething first-time mother incorporates a baby bump into the sleek, streamlined identity of the independent-minded modern woman.

Meghan’s maternity wardrobe will be scrutinised and debated almost as much as her wedding dress. Getting pregnant while newly minted into the royal family, when the spotlight on her is at full beam, will make the focus on Meghan’s maternity look even more intense than it would have been in a year or two. There has been no shortage of royal babies this decade, but poor Kate was so wretchedly sick that she had to be excused from smile-and-wave duties for much of her pregnancies, so the public appetite for princesses-with-bumps is far from sated. And anyway, it was all very different with the Duchess of Cambridge. Kate’s USP was simply that she was Not Posh. She didn’t have a triple-barrelled name that sounded like an Austrian ski resort and people in her family had actual jobs, and that was enough to blow our tiny minds back in the innocent days at the beginning of this decade. We didn’t expect her to be modern as well. That’s where Meghan comes in.

When the baby announcement came on Monday morning, it was met with the uncomplicated joy that is the due of baby news, which is always the loveliest of news. It is from here on in, however, that things get more complicated. After that first flurry of congratulations, when, in an ideal world, it might be nice to allow a newly pregnant woman some time and space, our borderline-creepy modern obsession with women and their bodies means that the focus barely lets up until she goes into labour.

Maternity fashion is where we watch women morphing into mothers. Traditional maternity wear – smocks in spriggy florals, babyish sailor-suit trims as once favoured by the Duchess of York – looked as if it had been made from offcuts left after the nursery had been decorated. This made the mother-to-be’s new status pretty clear: domestic, relegated from grownup decision-making, a person whose public existence was to be at the edges of her children. The arrival of stretchy maternity jeans around the beginning of this century marked a sea change. (Wait, maybe pregnant women are still normal people!) Now there are maternity business suits with stretchy side panels, maternity athleisure, even maternity Spanx for red-carpet events.

There is no single approach that all modern, independent-minded women take to what they wear while pregnant. Some feel a strong instinct to hold on to their identity by adapting their wardrobe as little as possible, so they are all about the tailoring with stretch panels and high-waisted yoga pants. For others, the expectation to maintain pre-pregnancy levels of grooming and glamour feels like an unfair burden, so they prefer to wear the same oversized pieces throughout the pregnancy and opt out of the fashion game as much as possible.

The official pregnancy news was broken on Twitter, but in the stolidly 19th-century phrasing still used by Kensington Palace (“Their Royal Highnesses … are very pleased to announce …”). The real announcement, though, came when Meghan was photographed clutching two purple folders in front of her stomach when she landed in Sydney. This was immediately eyecatching, because royals are rarely photographed holding anything other than a clutch bag or flowers presented by a schoolchild. As a 21st-century update on Grace Kelly using her Hermès bag to conceal her early pregnancy from the paparazzi, it was a neat trick. Modern princesses have briefs to read, even when they are pregnant. Those folders, and that the announcement was made at the launch of a 76-engagement tour, seem a pointer to how Meghan intends to play the business of being publicly pregnant.

Meghan finds herself in the category of globally famous women who have to find a way to navigate “bump watch”, as the weirdly surveillance-esque language of popular culture has it. However shocking it seemed at the time, Demi Moore and her pregnant stomach on the cover of Vanity Fair now looks like an image from a more innocent age, a simple portrait of mother-and-baby. As scrutiny has become more intense, women have found new ways to manage it. Beyoncé, always in control, has art-directed her own theatrical pregnancy announcements on stage, or on Instagram. Kylie Jenner subverted the normal rules of engagement by not announcing the pregnancy until after the birth of her baby.

Judging by her outfits at Eugenie’s wedding and so far in Sydney, Meghan will make use of the power of tailoring and find some haven in the privacy that a well-cut coat can afford. For her first day in Sydney she wore a sleek white dress by the Australian designer Karen Gee with a raised waistband that drew the eye higher than any potential baby bump. Her look so far, in the very early months of pregnancy, has been sophisticated, grownup, sober of colour. Lots of pencil skirts, silk blouses, nothing too skin tight; tone-on-tone colours rather than matching brights. Sleek and subtle is what we, the public, want from her, it seems, because the one time she wore a blowsy floral Oscar de la Renta maxidress, for a wedding, was the one time she was heavily critiqued for her choice. Meghan’s role is that of the modern duchess. And modernity is about to meet maternity.