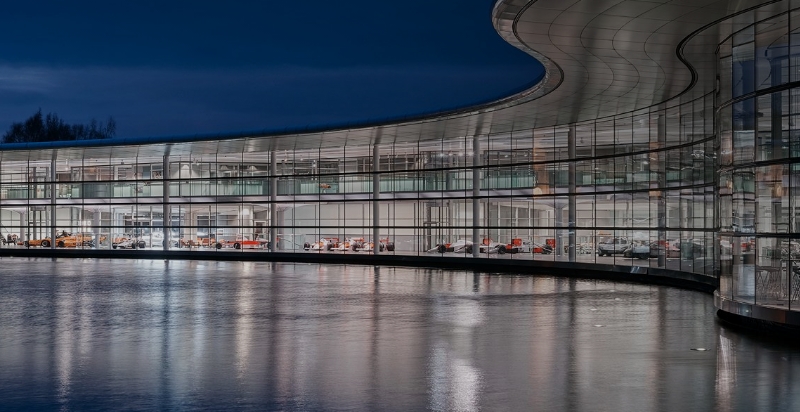 This article titled “McLaren pledges luxury cars as collateral in bid to secure £250m” was written by Jasper Jolly, for The Guardian on Friday 22nd May 2020 17.50 UTC

When the government called for British industry to help build life-saving ventilators as the scale of the coronavirus crisis became clear, McLaren was one of the first to step forward. As part of the VentilatorChallengeUK consortium alongside Airbus and Rolls-Royce, by mid-April the Formula One firm was making components for the life-saving machines and building the trolleys used to transport them.

This week it has emerged that the high-tech business is involved in a different sort of emergency – attempting to shore up its own finances – and is trying to pledge its collection of hugely valuable cars and its state-of-the-art Norman Foster-designed HQ in Woking, Surrey, as collateral to get the finance it needs.

McLaren’s revenues have slumped during the pandemic, despite many of its super-rich clients being relatively insulated from the worst of the crisis.

Car buyers around the world have been unable to visit showrooms, making the purchase of an extremely expensive supercar difficult. Even the wealthiest buyers want to see their prospective purchase before handing over £163,000 for McLaren’s GT, a road car.

Limited-edition cars can cost far more: the windscreen-less Elva will cost a reported £1.4m, before options such as a 24-carat gold engine heat shield are included.

The carmaker also failed in its request for a £150m emergency loan from the government, Sky News reported.

McLaren’s Formula One revenues have also been hit, although last week it signed the Australian driver Daniel Ricciardo for the next season. This season, which was due to start in March, is tentatively due to start on 5 July, behind closed doors.

The race series accounts for about 12% of the group’s revenues through prize money and advertising deals.

McLaren has burned through £257m in the year up to 20 April, with further outflows expected as lockdowns continue. Like nearly 1 million other British businesses the group has furloughed staff and implemented temporary pay cuts for those still working. Production at Woking was suspended in March.

The group’s existing shareholders pledged £300m of equity investment in March as the carmaker desperately sought to plug the hole left by the pandemic. They are thought to have included the Bahraini sovereign wealth fund, Mumtalakat. The fund has owned a majority stake in the carmaker since 2017, when the group’s founder, Ron Dennis, left.

McLaren, however, needs another £250m to avoid a cash crisis. It has hired the investment bank JP Morgan to engineer a bond issue, but has driven straight into a dispute centred on who can claim ownership of its “heritage car” collection if the company collapses.

The collection includes Formula One cars driven by the founder, Bruce McLaren, and the racing legend Ayrton Senna. The dispute was first reported by the Financial Times.

Existing bondholders believe putting up the car collection as security could contravene the terms of a 2017 debt issue, which they say used the same assets as security. The 2017 bond borrowed £525m for a five-year term partly to fund a buyout of Dennis, the former executive chairman.

Some bondholders say they were not approached by McLaren about the new issue, but believe that any change to collateral would require their consent.

Others have indicated they are willing to participate in a new emergency fundraising, but only if the British supercar manufacturer backs down in the dispute.

A McLaren spokesman said: “We are currently investigating a number of different funding options and have based all of our proposals on robust legal advice.”

However, Brian Studioso, an auto analyst at bond ratings agency CreditSights, believes a new debt issue is key for McLaren.

In a note to investors he wrote that the firm’s “acute and immediate cash burn” meant it was facing a liquidity crisis. He added: “Any progress towards nailing down financing to bridge the gap and help McLaren reach the other side of the immediate impact from the Covid-19 lockdowns is a positive.