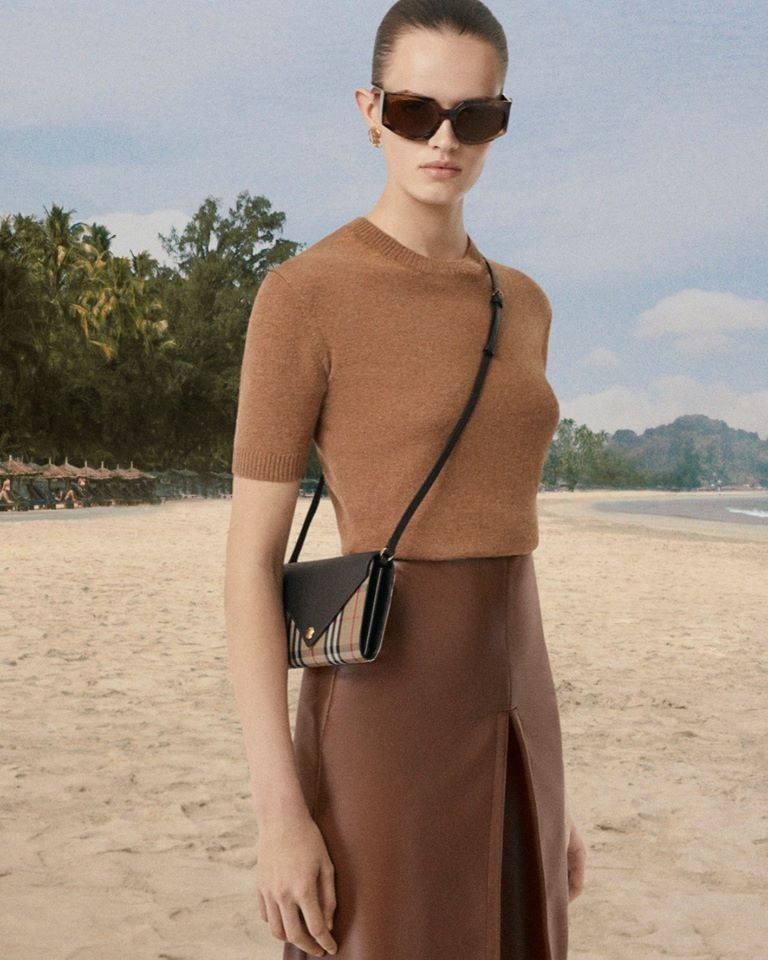 A world of Burberry mini bags and wallets designed for new landscapes; @Burberry

This article titled “Burberry cancels dividend after sales plunge 27%” was written by Sarah Butler, for theguardian.com on Friday 22nd May 2020 12.13 UTC

Burberry has scrapped its full-year dividend payment to shareholders as sales plunged 27% in its fourth quarter because of the Covid-19 lockdown.

The luxury British brand, best known for its trenchcoats and signature check, said it was cancelling its end-of-year payment to shareholders, worth about £120m last year, and had borrowed £300m via the UK government-backed business support scheme after the sales slump in the three months to 28 March.

Pre-tax profits slumped 62% to £169m in the year to 28 March after the company said it was making a £241m one-off provision related to the coronavirus crisis including £68m related to stock, which will be sold at a hefty discount and an £157m writedown on the value of its 465 stores because of poor trading.

The company said it was sticking to its commitment not to burn unsold stock and would be clearing excess product by moving it to parts of the world where stores were now trading and through online discounts, sample sales for employees and recycling.

Burberry said it could not predict sales and profits for the year ahead as it would take some time for luxury shopping to return to normal levels across the world in the light of the pandemic.

“The virus has clearly changed the world and the way people conduct their lives. There will be significant pressure on the luxury consumer. Social distancing will inevitably slow down economic trade,” said Julie Brown, the chief operating and financial officer.

The company said that half of its stores were currently closed and trading in the three months to the end of June was likely to be “severely impacted”.

Sales fell 3% to £2.6bn for the year after Burberry was forced to close the majority of its stores in mainland China in February, while those that remained open operated with reduced hours and had “significant declines” in visitor numbers.

Trading was also affected by closures in Europe in March and disruption from months of protests in Hong Kong, where sales fell 40% for the year.

Burberry said it was reviewing its store estate in Hong Kong as Brown said it was clear that tourist destinations, in Asia and Europe, were likely to have fewer visitors for the time being.

Chinese shoppers account for 40% of Burberry’s sales and usually spend half of their money abroad but Brown said they were now more likely to buy locally.

She said online shopping and digital communication with shoppers would also be more important, and Burberry’s investment in those areas meant it was well placed to cope with the current environment.

The company said trading in China started to improve in March and it had reopened all stores there but the number of shoppers about in other parts of Asia, including Hong Kong, was still significantly lower than usual.