Magna Carta to get modern makeover for 800th anniversary 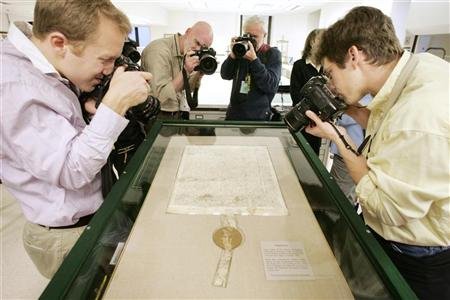 The Magna Carta will celebrate in 2015 its 800th anniversary. On this occasion, the English medieval document considered a cornerstone of modern democracy, will get a modern makeover.

Auction house Sotheby’s described Magna Carta, which translates from the Latin as “Great Charter”, as “the most important document in the world” when it sold an original copy from 1297 five years ago in New York for more than $21 million. Not only does it form the bedrock of Britain’s constitutional freedoms, it was the basis for both the U.S. Constitution and the Declaration of Independence.

A three-year research project will attempt to discover whether King John, the monarch who signed the document in 1215, really was the villainous monster made popular by portrayals in the Robin Hood legend.

“We’re hoping to gather together all of the evidence for this iconic document that hasn’t previously been assembled,” Professor Nicholas Vincent, the historian leading the project, told Reuters.

The Magna Carta was signed by King John of England at Runnymede to the west of London following an uprising by his barons, establishing certain rights of the English people and curbing the powers of the monarch.

The findings of Vincent’s team, based at the University of East Anglia in eastern England, will form an online database and a complete commentary on the Magna Carta, as well as materials for a major exhibition at the British Library in London to be held to mark the 800th anniversary of the charter in 2015.

Ironically, Professor Vincent said such longevity had never been the intention of the barons who foisted the document on John.