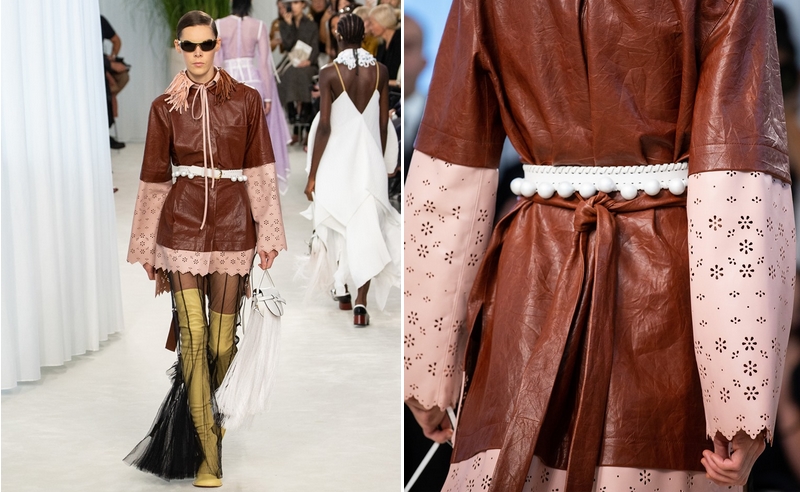 There is a certain type of fashion fan who loves clothes but isn’t obsessed by them. For her, clothes are about identity, history and craft and definitely not about the “thigh gap”. She values intrigue over prettiness. Her cultural choices – what she reads and the exhibitions she goes to – are at least as important to her self-image as anything she wears.

She probably watches Killing Eve, this woman, so it makes perfect sense that Jodie Comer – AKA Villanelle – stars in the advertising campaign for Loewe, the craft-luxe brand that presented its spring/summer 2020 collection in Paris on Friday morning.

The set – a series of white-curtained antechambers created within the brutalist concrete curves of the Unesco heritage building – set the tone. Seven-feet-high shimmering amethyst geodes stood sentry, while fluffy clusters of pampas grass – a plant with undeniable connotations – were dotted around. Just before the first model stepped out they started to twirl slowly, to eccentric effect.

The show presented a continuation of the Loewe template: fine fabrics, artisanal details and a flattering fit-and-flare silhouette.

Innovations included three dresses with dramatic panniers, made in fine buttercream, lilac and black lace, their white trimming echoing corsetry boning. “I liked exploring hips this season,” said Anderson, adding that he had been looking at the 16th and 17th century, playing with proportions and had taken inspiration from the silhouettes in Irving Penn’s photography. “I wanted it to be aristocratic,” he said.

It was definitely sexy, with bra tops and a lot of transparency – perhaps that was what the pampas grass was about. At times it felt pagan, with a touch of the bucolic horror film Midsommer to the aesthetic.

Likely hits included the mackintoshes – one was oversized, with tendrils flowing to the floor, another was neat and A-line, with a contrasting leather collar. The bags, which are Loewe’s bread and butter, included a soft bucket-shaped balloon bag, particularly covetable in crochet raffia.

The Comer advertising campaign – which went viral days before the show – features the Killing Eve actor staring into a mirror and saying “Loewe” repeatedly while acting out a series of emotions: sorrow, indignation, gratitude. Loewe is not a brand that everyone knows, and the fact that to the uninitiated its name is probably unpronounceable is surely part of the joke.

Since Phoebe Philo left Celine, almost two years ago, Loewe’s aesthetic has become the dominant force in a look pegged as the decade’s most influential by the Guardian’s Jess Cartner-Morley, who described it as “ceramicist with a private income”.

Sadly, with clothes this beautiful, the private income bit would be essential for top-to-toe Loewe, but the collection’s influence will be felt far and wide. Judging by the reaction to the show, it may well dominate the next decade too.