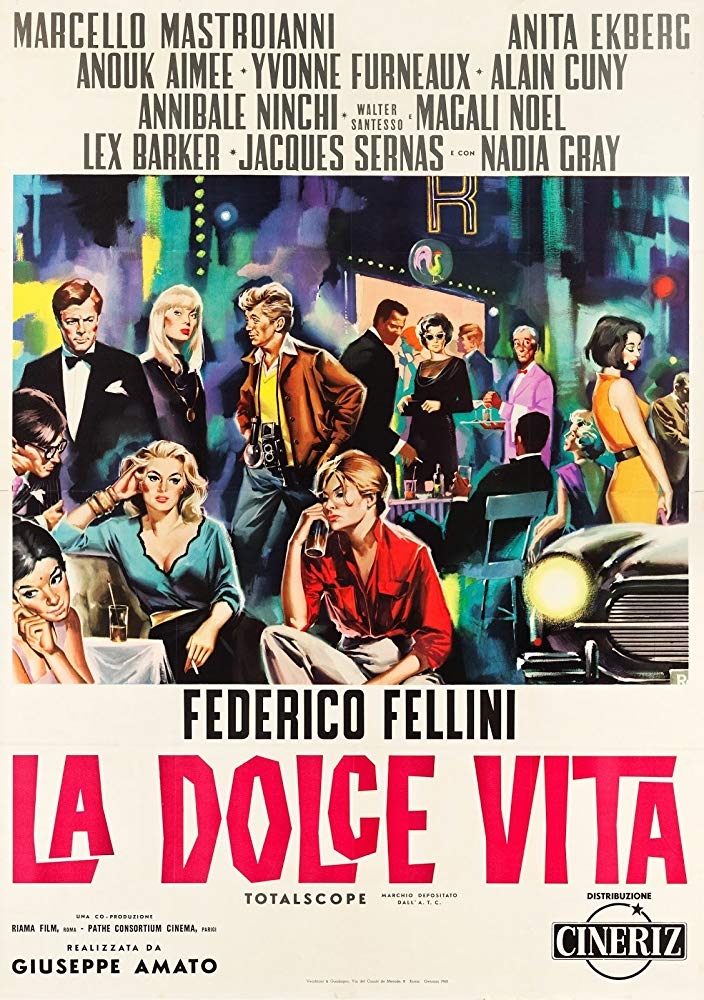 This article titled “La Dolce Vita at 60: the fame, the fortune, the fountain” was written by Charles Bramesco, for theguardian.com on Wednesday 5th February 2020 15.15 UTC

Federico Fellini’s 1960 masterpiece La Dolce Vita premiered in his native Italy 60 years ago today, eventually trickling into American theaters just as they were getting hospitable to foreign films. Stateside moviegoers in the 60s looked at the latest releases from the big-name masters – Bergman, Kurosawa, Godard – as two-hour passports to far-off lands, and the ineffable Italian-ness of Fellini’s cinema played a significant role in its US reception. As world-weary gossip columnist Marcello Rubini, the great Marcello Mastroianni embodied the image of Euro-cool, resplendent in his jet-black sunglasses and slickly tailored suits. The film’s rear-projection driving scenes are, simply put, the greatest in the history of the medium; Americans were instantly smitten with Marcello’s sporty little hot rod, his disaffected scowl, and the seductive artifice of the filmed nighttime splayed across the background.

With over a half-century of perspective, it makes perfect sense that that exotic quality would’ve been a major draw for domestic viewers at the time, considering how alien Marcello’s inner struggle is to the American way of life. He’s tormented by his own conscience, caught between the promise of the sacred (marriage, family, religion) and the temptations of the profane (sex, wealth, luxury). He makes his entry literally straying from the path of Christ, peeling off from the trail of a helicopter transporting a Jesus statue to flirt with some sunbathing beauties who can’t hear him over the chopper. Throughout the film, he navigates a tony milieu of nobles and socialites unfamiliar to and incompatible with American terrain.

The passage of time has double-underscored the disconnect between the alluring sleekness of Italian high society and its gauche equivalent in the States, where all money is new money. Fellini dazzled with visions of indulgence so intoxicating that they could conceal the moral rot festering within, but our one-percenters could never quite get the hang of that, and they’ve only gotten worse. At this point, it’s nearly nostalgic to revisit a time when being rich was so damn tasteful.

Marcello stumbles through the episodic plot as he stumbles through his own existence, fundamentally passive about his cushy lifestyle. He makes a good salary paying off waiters to let slip which Duke had the snails, and when he gets tired of the mistress that he goes to when he gets tired of his wife, he can cavort about with a buxom Swedish movie star. He has access to the uppermost slice of the upper crust, welcome at their parties and an eligible sexual prospect. His trouble is that he has just enough moral fiber to feel shame about their excesses, and yet not quite enough to commit himself to a more principled path.

La Dolce Vita remains the ravishing, existentially punishing experience that it’s always been because Fellini does a bang-up job selling us on sin. He gives in to his urges to cue up the film’s most famed sequence, the frolic in the Trevi fountain with the Swedish starlet portrayed by Anita Ekberg. At first, he resists her invitations to join her in the water, joining her in a symbolic concession to the flesh. His internal plight is understandable; it would take a titanium will to resist the dizzying mix of rushing water and blonde hair and black fabric. Glamour on that level seeps out of everything, from the chic costuming to the slinky dance moves and the gorgeous interior production design. With corrosion of the soul like this, who needs virtues?

For every decade since its original gutting at Fellini’s hands, the ideal of extreme wealth has lost a little bit of its luster. The 1960s were really the final years before the upper class would be subsumed by the soul-deep tackiness that came to define the moneyed elite in the second half of the 20th century. New York’s new It Attraction is the TWA Hotel, a retro-aesthetic novelty harkening back to the Mad Men era, and its paradigm of haute style. The 70s and 80s, with the surge of new millionaires minted in the wake of Reaganomics, introduced the image of the over-tanned, proudly garish moneybags as the new standard of class. The purest avatar of that movement now sits in the White House, providing new living proof on a daily basis that money can’t buy you class. (To quote a woman who successfully infiltrated the glitterati, and then went to work dragging the Count-and-Countess set down to her brow level.)

Shifting sociological tides have turned capital into a mark of shame, and completely reoriented ideas of status. The emerging generation of young people aspire to more meaningful things than a hefty bank account, and find only distaste in the exclusive and rarefied nature that made Marcello’s subjects a topic of interest. Marcello may have been influential enough to coin the term paparazzi, but the gossip columnist is on his way out as a fixture, supplanted by the everywhere-at-once panopticon of social media. Royalty itself has come to feel passé, as the two most outward-facing members of the Crown family step down from their stations. The oldest families in America are no longer objects of envy, but emblems of decline.

Marcello’s crisis is one of creative integrity, a concept increasingly remote in the anything-goes scrum between art and commerce that makes up today’s entertainment industry. Marcello toys with the notion of going into literature, and adopting a more intellectually nourishing life to go with it. He eventually ends up as a publicity agent, a devolution that critic Ty Burr described in his book on the essential cinema canon as “a Pilgrim’s Regress”. The anxiety over that personal compromise scans as downright quaint in 2020; our version can’t possibly be Lizzo gladly snapping a selfie with Jeff Bezos in a private box at the Super Bowl, can it?

Marcello ends the film unmoored, shouting unheard words, just as in his first appearance. He has no idea what to do with all of the ugliness he perceives in his beautiful world, symbolized by the ghastly mutant fish that washes up on the pristine Italian beach in this final scene. The viewer may share in his despair, as he’s caught once again between the sacred and profane. But there’s also penumbra of envy to it, that at least he had plenty of the sacred to go around.