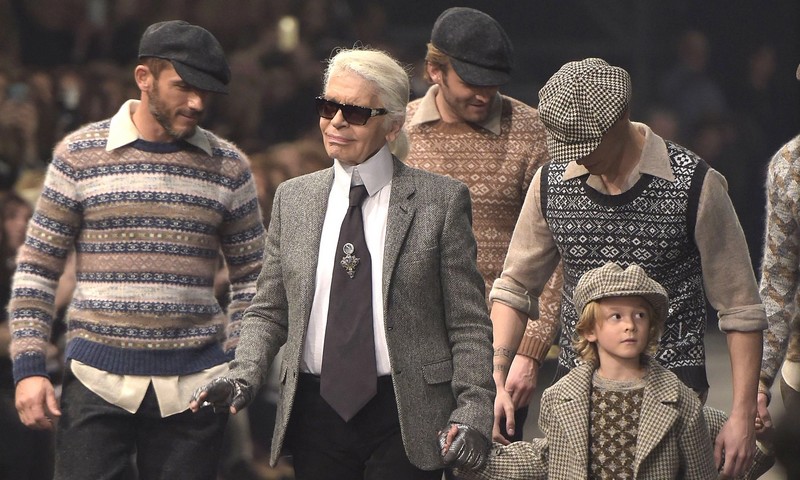 This article titled “Karl Lagerfeld’s heart is in Paris, even on Chanel’s Roman holiday” was written by Jess Cartner-Morley in Rome, for The Guardian on Tuesday 1st December 2015 23.41 UTC

The grand scale of theatrical ambition for Chanel’s Paris-Rome event was evident from Karl Lagerfeld’s choice of venue. Rome’s Cinecittà, a film set the size of the Vatican City, is where Elizabeth Taylor and Richard Burton fell in love on the set of Cleopatra, the movie that almost bankrupted 20th Century Fox. Federico Fellini, who filmed La Dolce Vita there, called it the “temple of dreams”.

Lagerfeld is one of modern popular culture’s great storytellers. He has created at Chanel a seductive and vivid fantasy world to which the world’s consumers are so in thrall that the brand is estimated to be worth $7bn (£4.7bn).

For the latest instalment of the Chanel story, he invited journalists, clients and celebrities to Cinecittà, where he created not one but three stage sets. The evening began with a cocktail venue lit by oil torches and decorated with faux antiquities; moved to an outdoor cinema; and finally gathered at catwalk venue Teatro No 5. The audience, unsteady in their high heels and tight dresses, wobbled gamely between the three like an 800-strong troop of heavily costumed extras.

In homage to the heritage of Cinecittà, Lagerfeld preluded the catwalk collection with a short film. In Once and Forever, actors Kristen Stewart and Geraldine Chaplin star as actors preparing to play Coco Chanel at different ages in an imaginary biopic of the designer. The point of it seemed to be for Lagerfeld to joke about the dizzyingly meta level at which his Chanel now operates.

Technically, Chanel’s Métiers d’Art show is an annual collection of special edition pieces that highlight the brand’s craftmanship. Its strategic significance, however, is as part of the 21st-century trend for extravagant fashion events in exotic locations.

This is the modern luxury industry’s equivalent of the space race. Just as the drama of the cold war was played out in the public imagination throughout the 1960s by the race to land a man on the moon, so the battle for superiority between the global superpowers of fashion – Chanel, Christian Dior, Louis Vuitton, Burberry – is played out via lavish set piece parties at which each brand attempts to demonstrate its superiority by way of a glitzy party and show.

The marketing strategy is bombastic in the extreme, but there is skill and subtlety in Lagerfeld’s use of Rome as a setting to talk about Chanel. On the day of the show, the invited press were steeped in Roman flavour by a city tour that began in an otherwise empty Sistine chapel. If Lagerfeld’s Chanel is about the relationships between power and peacockery, refinement and ostentation, there can be no better stage set than the jewel of Renaissance Rome.

Paris-Rome was unusual in straying from an established Métiers d’Arts formula that shows Chanel through the filter of the locality. Last year in Salzburg, Cara Delevingne was dressed in tiered lace and made over in hair-ribboned, Sound of Music wholesomeness; in Linlithgow castle in 2012, Chanel models wore Fair Isle sweaters and tweed suits. The stage set for Paris-Rome, by contrast, was a pure facsimile of Paris.

Guests were seated at pavement cafe tables outside a boulangerie and beside a restaurant called Le Petit Coco. The collection, too, was proudly Parisian. One could perhaps detect traces of Vatican pomp in the feathered high collars, and in the richly embroidered round-shouldered capes that gave models the air of Medici cardinals. But from the coquettish mules to the Bardot coifs, from the jackets ribbed with strands of pearls to the skirts quilted in the leather of a classic Chanel 2.55 handbag, the aesthetic was unmistakably French.

Just occasionally, world events move even faster than fashion. To conjure up Paris now means something different than it did three weeks ago. Because of this, and in contrast to the bacchanalian frivolity at the cocktail party and screening, the catwalk show had an emotional charge.

The set was monochrome; when the show began the globe street lamps and fairy lights around the bandstand changed the lighting, softly, from noir to sepia. The Eiffel tower twinkled in the background, but the models appeared from below ground, emerging from the subterranean steps by a Metro sign.

It was a beautiful collection: elegant, sophisticated, deeply sexy. Chanel and Paris will always be inseparable. In the grand tradition of twist endings, Lagerfeld came to Rome, and made a love story to Paris.