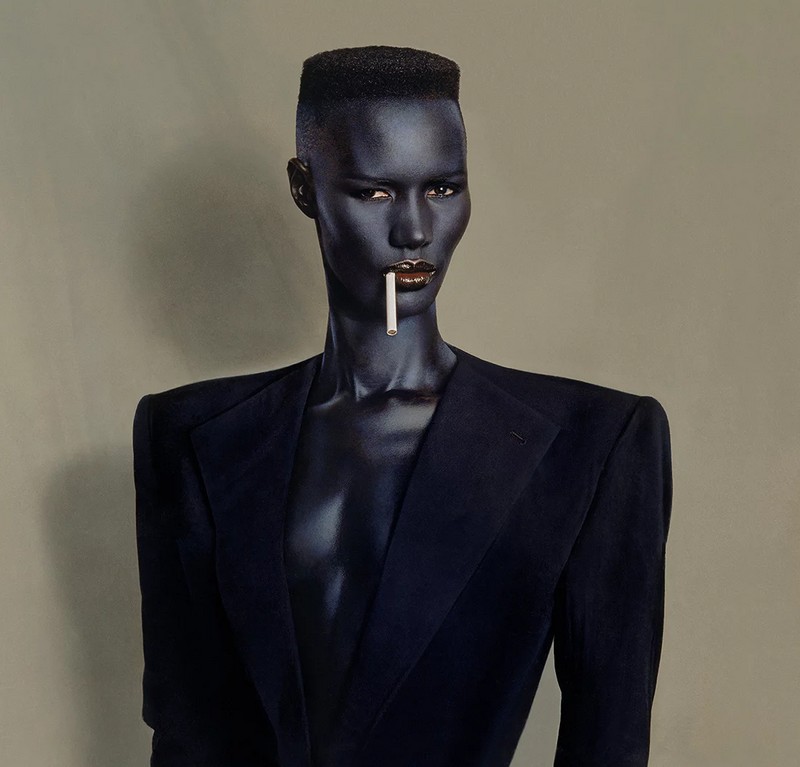 ‘I wanted to focus on her masculinity – to use what other people thought an embarrassment, and turn it to her advantage.’ Grace Jones, blue-black in black on brown, New York, 1981. © Jean-Paul Goude

The first time I saw Grace was at a show at Les Mouches, a gay bar in New York, in 1974 or 1975. I already knew of Grace as a model, but I didn’t know she had a voice. I was agreeably surprised. Her aesthetic, however, wasn’t a surprise. It was typical of the 70s. I thought, “She’d be great if someone like Helmut Newton or Guy Bourdin did the staging of her shows.” I didn’t even think of myself.

Later on, we got together. And for a while I was her accomplice, doing disco shows that I thought were tacky. But I’m a gentleman, so I didn’t say much, until the day she started copying me.

I was preparing a boxing movie that Andy Warhol was going to produce and I kept telling Grace that I wanted a musical number with all the boxers boxing in rhythm – that terrible, dangerous dance they do. And she came back [in her next performance] with two boys, very gay and not at all boxers, wearing big boxing gloves. They didn’t have the moves at all; they danced like chorus boys. It looked stupid and tacky. And I told her so. I said “If you’re going to copy me, why don’t you do it properly? Why don’t I get involved?” And she said “Sure!” I got so involved, I eventually did everything in the show.

This shoot was the beginning of the One Man Show [a live performance directed by Goude]. Our relationship might have been a romantic affair between a disco star and a little French artist, but I felt like Josef von Sternberg directing Marlene Dietrich. We took ourselves very seriously. And of course, this image was very important in both our careers: I maintain it’s the best role Grace ever played, and one of the best things I ever did.

I wanted to focus on Grace’s masculinity – to use what other people thought an embarrassment, and turn it around to her advantage. I wanted to create – with her, of course – a new character. It went beyond just a haircut, it was an attitude. It was new and strong and ambiguous. You didn’t know if it was a man trying to be a girl or a girl trying to be a man. It was a revolution. I remember the A&R guys at Island saying, “Are you fucking crazy? This is never going to work.” And of course it did.

It was Grace saying goodbye to disco and decadence, and hello to a radiant future with me!

The look went with the music. Around this time, Chris Blackwell signed Grace to Island Records, and her music took a new-wave turn. He blew up one of these photographs really big, 10ft tall or something, and put it in the studio, so that Sly and Robbie, two musicians from Jamaica who were not big fans of hers at the time, but were playing on her new record, would understand what the whole thing was about.

Initially I wanted black on black in black – the background, the outfit, and Grace – with just that touch of white in the cigarette. I then changed the background colour to beige. I gave Grace’s lips a shade of dark brown or prune and dusted her cheekbones and torso with blue pigment to bring out the volume. The cigarette was all about colour and composition. I subsequently used it in other images, too, on her eye and below her nose. Of course, it also suggests something rebellious.

People thought she looked outrageous, alien even. But it wasn’t just for show. I wanted this character to have great dignity. I wanted it to be a slap in the face to all the entertainment of the day, the Diana Rosses and other stars, all made up like stolen cars, with windswept hair. This was pure rigour, a girl being perfectly serious.

I wanted the audience to be intimidated by this person, who wasn’t doing things like anyone else – the show, the look, the way of speaking, the music … it was all entirely new. And that’s what the One Man Show was about: it was Grace saying goodbye to disco and cheap decadence, and hello to a radiant future, with me! It had a lot to do with a love story, really. In the end, enthusiasm is what makes you create.

Most people since – young singers and big stars alike – have helped themselves to the Grace/Jean-Paul pool of ideas. They take stuff willy-nilly – the hairstyle, the look, the gestures, the mise-en-scene, the choreography. And it’s true that this character we created is much more spectacular than wearing big hats or designer outfits. It was completely original, a look that influenced fashion – that influenced the world.

Born: Saint-Mandé, France, 1940.
Studied: “École Nationale Supérieure des Arts Décoratifs, for almost two years.”
Influences: “Winsor McCay, George Lois, Richard Avedon and many, many others.”
High point: “The Bicentennial Parade of the French Revolution, 1989 [which Goude directed].”
Low point: “Throat cancer, from 2012 to 2013.”
Top tip: “Be yourself, do your best.”