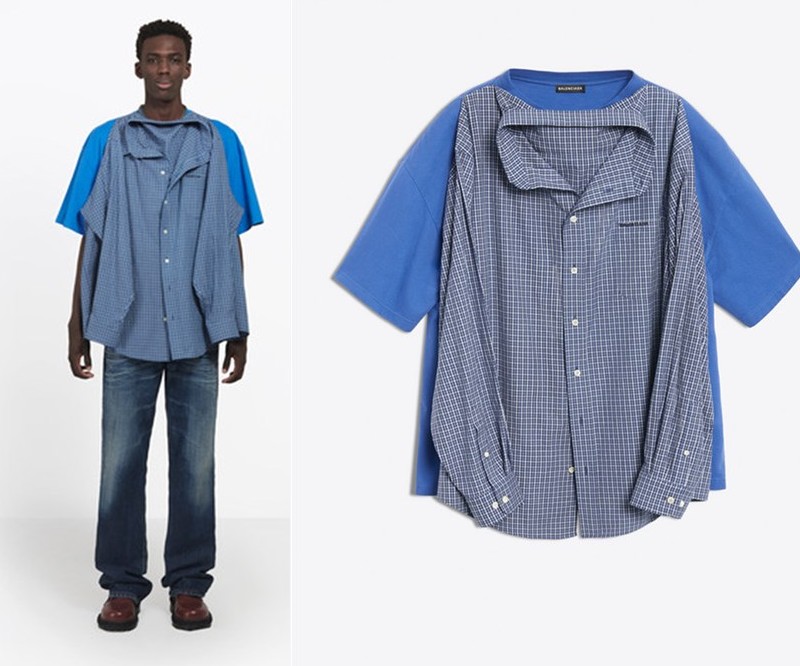 It’s the perfect gift for the man who has everything except, perhaps, self-respect: Balenciaga’s “T-shirt Shirt”. As the name suggests, the piece, which is part of the luxury’s fashion house’s Fall ‘18 collection, is a T-shirt with a shirt draped on top of it. You can get your hands on one for just $1,290 (£974). That might seem like a lot but remember you’re getting a T-shirt and a shirt, it’s basically buy one get one free.

Balenciaga are the masters of convincing their customers to part with large amounts of their money while making them look ridiculous. Ever since creative director Demna Gvasalia took the helm of the Spanish fashion brand, they seem to have been trolling us mercilessly with fashion that’s designed to go viral.

Their $2,000 Ikea-inspired bag made waves on the internet last year, as one imagines it was designed to do. Ikea even put out a tongue-in-cheek guide helping you tell a genuine, 99 cent, Frakta bag from a luxury imposter: apparently if it rustles, it’s real.

Then there was Balenciaga x Crocs, released unto the world at Paris Fashion Week last year. Despite costing $850 and looking like they were designed by a preschooler, the Balenciaga platform crocs sold out before they were officially for sale.

The danger of making clothes based around simple farce is it’s easy for counterfeiters to copy your work. Some online have already been getting creative:

Trolling the fashion world seems to be working out well for Balenciaga: last week the chief executive of Kering, a global luxury group that manages the likes of Alexander McQueen, Saint Laurent, and Gucci, said that Balenciaga was the fastest growing brand within its group. They attributed this growth to men and young millennials most of whom, one imagines, aren’t actually buying the more outlandish items like T-Shirt Shirts but Balenciaga’s more down-to-earth designs. Like the $915 black leggings or the $395 leather wallets with “leather wallet” stamped on the front – only marginally more sensible.