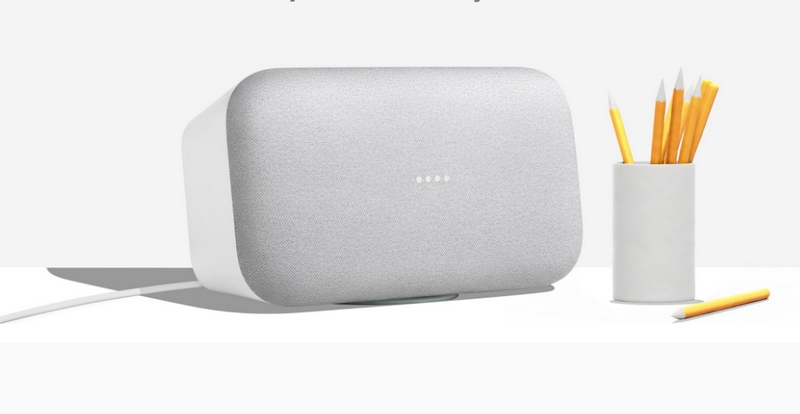 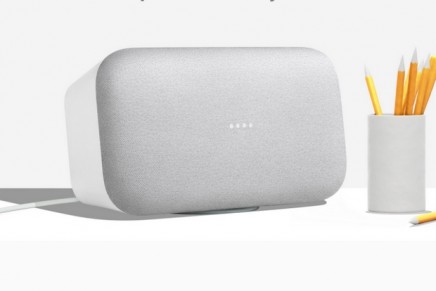 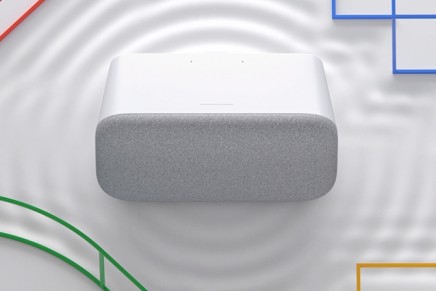 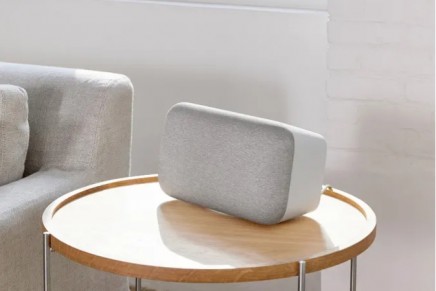 Announced in October 2017 and on sale in the US since November, the Home Max joins Google’s smaller Home and smallest Home Mini smart speakers as the big one. Google Assistant sorts voice commands, controls and questions exactly the same as Google’s smaller smart speaker offerings, but the way it sounds couldn’t be more different.

The Home Max is relatively large box speaker, by smart speaker standards, with a white or black smooth plastic body and grey or charcoal coloured fabric front. In white and grey it’s simple fabric front and rounded corners make the Home Max look a bit bland up next to a Sonos Play:5 or an Apple HomePod, but it might be easier to blend in with soft home furnishings. It is about the size of a large bookcase speaker, but weighs over 5kg.

White dots in the centre of the fabric front show when the Home Max is actively listening to you, when it’s working on a query or speaking to you, or shows the volume level when you adjust it.

It can be stood up vertically or placed horizontally with a little rubber foot that attaches to the bottom magnetically. When horizontal the hidden touch strip on top acts as a pause-play button and a volume slider, both of which work well.

A mute switch on the back allows you to turn off the microphones if you would like a little privacy from Google Assistant’s listening out for its wake words, which are either “Hey Google” or the older “Okay, Google”. When the mute switch is flicked the dots light up red until you turn the mics back on.

An analogue 3.5mm line-in socket and USB-C port round out the back, alongside the figure-of-eight power cable. There’s also Bluetooth for streaming your music directly from a phone, tablet or computer if you need to.

Setting up the Home Max is super easy, but requires an Android or iOS device. Just plug it in, open the Google Home app on your smartphone or tablet, tap the button to set up a new device and follow the instructions. It took about five minutes to get the speaker out of the box and playing music.

Google Assistant is the same on the Home Max as it is on any other Google Home smart speaker. Since the original Home launched in May 2017, Assistant has become smarter answering more and more questions, and is impressively able to not only recognise the words you’re saying but also what you’re trying to say – when you butcher a question, Assistant will still be able to work out what you want, more often than not.

Assistant also has the ability to recognise individual voices using Google’s Voice Match – a feature still not available for Amazon’s Alexa in the UK – so when you ask for an update on your calendar or music from your library you get your stuff, rather than stuff belonging to someone else who lives in your house.

But it is Assistant’s ability to control a wider range of music services, including Spotify, Google Play Music, YouTube Music and Deezer – combined with the best voice recognition – which has made it the one to beat.

The Home Max certainly produces a big, aggressive sound and is loud enough as a single unit to fill even large rooms. It’s front-facing two 4.5in woofers and two tweeters produce fairly direct sound, making the Home Max a speaker to put at the end of a room rather than in the middle of it like Apple’s HomePod or the cheaper Amazon Echo. It doesn’t really have a sweet spot, however, sounding pretty uniform no matter where you sit in front of it.

It has an intelligent audio tweaking system called Smart Sound, which uses the mics and AI to adjust the music as you play to a account for location, noise sources, track and even the time of day. Apple’s HomePod has a similar system built in, but Sonos’s Play:5 and others require an iPhone or iPad to tune the speakers each time you move them.

The Home Max sounds punchy, producing music with lots of attack in the mids and deep bass. If you like big booming bass, you will love the Home Max, but I found the bass a bit loose in some tracks, missing some subtlety – turning the bass down in the equaliser helped a little.

Rap tracks such as Dr Dre’s Still DRE, Forgot About Dre or The Next Episode sounded really aggressive and great. Jazz tracks such as Moanin’ by Art Blakey sounded warm and punchy, and it even did a fairly good job with Holst’s Jupiter performed by the London Philharmonic Orchestra.

It seemed most at home with pop tracks such as In My Feelings by Drake or Anywhere by Rita Ora. But playing tracks such as Do I Wanna Know? by the Arctic Monkeys, where the intro drum beats lost a bit of their alternating rhythm, or a live version of Hotel California by the Eagles, which lost clarity and separation between individual notes and vocals, showed the Home Max’s weakness.

It has a big, powerful sound, but it lacks the sparkle and subtlety something like the Sonos Play:5 or Apple’s HomePod brings, which allows you to discover new parts of your favourite tracks you might not have been able to hear before.

The Smart Sound tuning improves over time, and I found that the sound was a little more room dependent than others, sounding better in the longer, more open kitchen than the living room.

Volume consistency between tracks on Spotify was also weak, with some tracks drastically louder than the previous. Dynamic range is great, but feeling like you have to jockey the volume between tracks isn’t. I also found thedirect, aggressive nature of the sound a little wearing over extended listening sessions compared to some more immersive rivals.

The Home Max can also play in multi-room audio groups with other Google Home or Chromecast devices, which makes filling your whole house with the same music easy. Stereo pairing is also available, but I did not have two to test.

The Google Home Max costs £399 and comes in two colours: chalk or charcoal.

While Google Assistant is the best voice assistant available right now, with the widest range of music services and most capable voice recognition and understanding, the Home Max doesn’t quite match the exquisite audio produced by the likes of the Apple HomePod or Sonos Play:5.

If you want a speaker to blast out music at a party or in the kitchen, the Home Max is brilliant. If you want a top-end living room listening experience to replace a great hi-fi, then at £400 this isn’t quite there yet.

Cons: variable volume in playlists, not much good for a non-Google user, smart speaker privacy concerns, better for some music genres than others, expensive