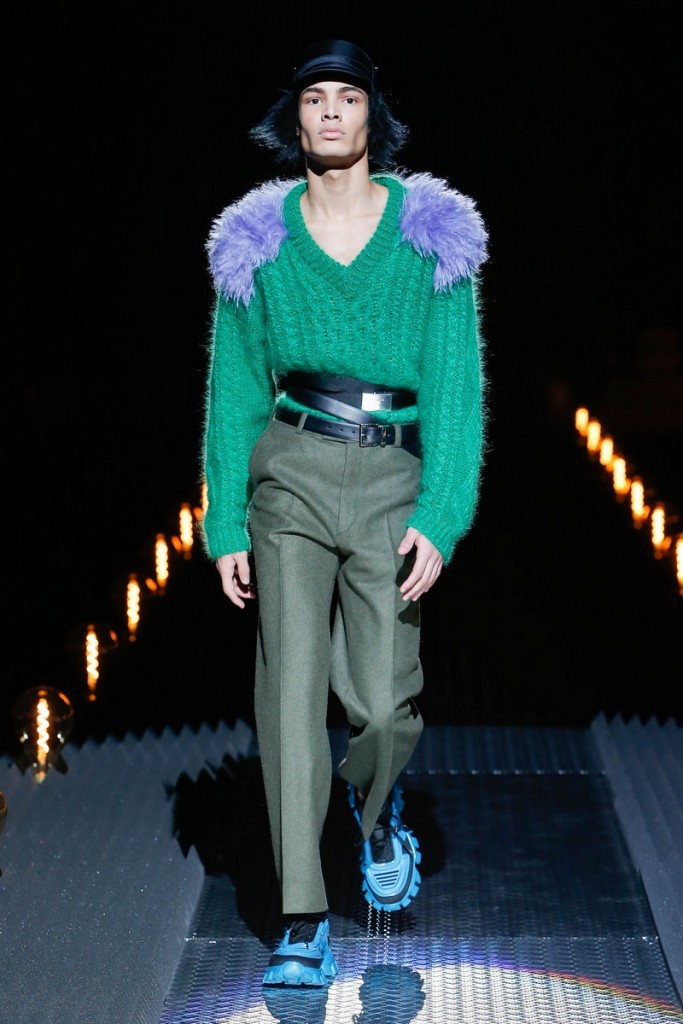 This article titled “Frankenstein-theme gets to heart of Prada’s menswear message” was written by Scarlett Conlon, for theguardian.com on Sunday 13th January 2019 21.26 UTC

Miuccia Prada is a designer so influential that she only has to dip her toe in the water of a new trend and the proverbial ripple effect is felt on all sides of the pond. After her menswear show in Milan on Sunday night, that means Frankenstein is about to become one of the most mined inspiration points on the fashion landscape this year.

“Frankenstein is an example of a monster with a big heart, so that was the main idea,” said Prada after the show, citing author Mary Shelley’s themes of humanity, danger, chaos as central to the appeal. On the catwalk, this took the shape of intarsia knitwear that appeared to be roughly stitched together with a large red heart on the chest; shirt prints of limbs; and multicoloured shearling that appliquéd deer-hunter hats, epaulettes and knitwear that Prada said was “a part of the madness”.

She said she was drawn to Shelley’s story of having to publish her work anonymously because her gender would not permit publication but, unlike Shelley, Prada is not a woman who struggles to have her voice heard. The social and political commentary she explores through her work has made her one of the most revered figures in the industry and has elicited calls for her to become a politician, she revealed tonight. Her manifesto for this collection circled ideas of reaching boiling point, anger and despair, she said, which needs little joining of the dots.

“[As a designer] you have the problem of how do you translate what is happening outside in fashion without being pretentious – you can’t be pretentious in fashion. I am aware of all the problems but we are still a luxury company, so you can do a lot. But I always have to be careful of what I say.”

For Prada, outfits can speak louder than words, and she mobilised her troops with the strong military vein that ran throughout the collection.

Several looks comprised khaki coats and long padded bomber jackets which had plenty of practical box pockets and compartments – details which also featured on the skirts and bandeau dresses of the sprinkling of womenswear looks that were unveiled. Suiting was strict and made compact with belts that resembled regalia. Elsewhere, backpacks came strapped across the models’ chests keeping them handsfree and ready for action as they walked to a soundtrack that featured Timewarp, Tainted Love, and Dance Macabre (the Jonathan Creek soundtrack to you and me).

For her autumn 2018 collection last January, Prada scored with what became a hero piece of the season, a contrast-print short-sleeved shirt with flames rising from the waistline which popped up on everyone from influencers to the actor and now style icon Jeff Goldblum. This season, the standout motif came in the form of lightning bolts, like the one that propelled a young Victor Frankenstein to start exploring the parameters of creation and destruction. The set mirrored the creator’s workshop and was designed by the architectural firm ONA to evoke a sci-fi atmosphere with experimental sponge pyramids and dimmed exposed-filament bulbs that lit the show.

Prada is understandably tentative about wading into controversial waters. In December, her brand issued an apology after figurines in its Pradamalia range, which appeared to contain blackface imagery, sparked outrage after being spotted in its Soho store in Manhattan. It prompted the brand to set up an advisory council on diversity issues “to guide our efforts on diversity, inclusion and culture,” it announced in a statement, promising to “learn from this and do better”.

As far as the financial side of fashion’s most influential label, it is doing better. Last August, the brand reported rising sales, profit and income in the first half of the year, bucking its previous form, which had seen it post falling profits since 2014. In addition, its digital sales had experienced double-digit growth in the same time period and are on course to reach 15% of total sales by 2020.