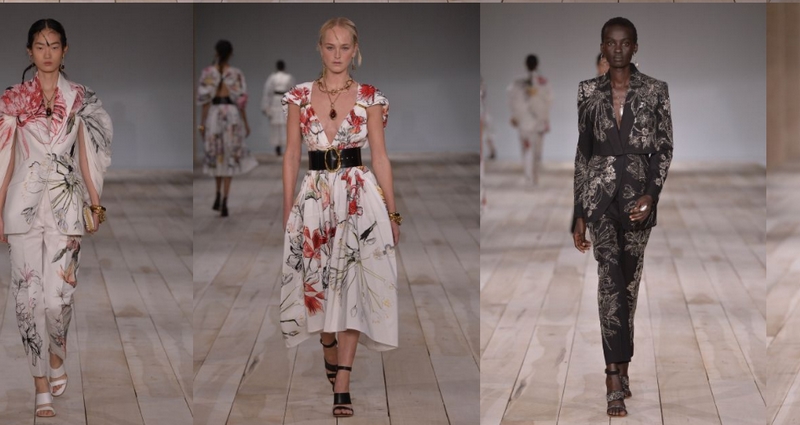 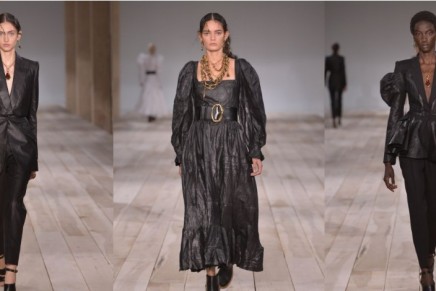 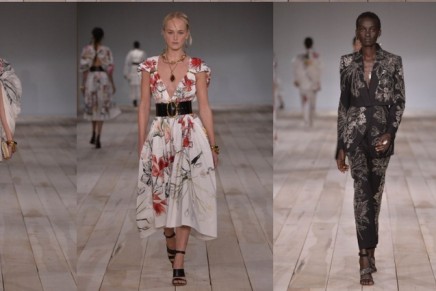 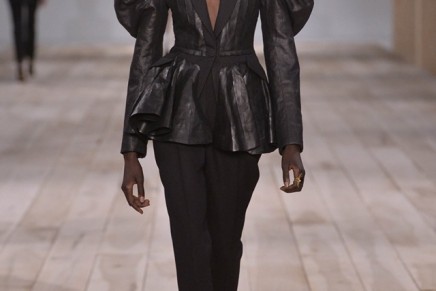 This article titled “Flowers and Irish field trips on the runway at Alexander McQueen in Paris” was written by Jess Cartner-Morley in Paris, for theguardian.com on Monday 30th September 2019 21.28 UTC

Fast is no longer in fashion. For her Alexander McQueen show, held in an orangery in Paris on Monday evening, the designer Sarah Burton wanted to slow down time instead.

After a field trip to Ireland, Burton and her team sketched endangered flowers, embroidered the drawings into guipure lace, and constructed a tailored suit. “A lot of the fabric industry in this country is endangered, so it was this idea of catching things before they disappear,” said the designer.

The team visit to Ireland, and a collaborative project in which the whole studio worked together on looms to convert a life drawing sketch into fabric, were “about slowing down time. There’s so much noise in the world, everyone is so rushed, we all constantly feel like we have no time. And embroidery takes a long time. So this season was about having a moment for us as a community to be with our own thoughts and consider what we think, rather than listening to anyone else.” At the end of the show, Burton brought her entire design team on to the catwalk to share her bow.

Burton joins a number of high fashion labels, including Chloé, who this season have broken fashion taboo by revisiting previous collections, to challenge the notion that fashion is throwaway. First on the catwalk this season was a puff-sleeved ivory linen dress – moon-bleached rather than sun-bleached, a traditional Irish method of reaching a silver-white rather than a yellow-white finish – which was a reworking of a shape from the Eshu Alexander Mcqueen collection of Autumn 2000.

The final dress of the collection was modelled on a look that featured on the runway last season. The reworking was “a symbol of life”, Burton said.

Strong shoulders, a McQueen trademark, were sharp and angular on tailored suits, or puffed high on dresses with renaissance-style square necklines. The puffed shapes came from looking at the soft drama of Irish shawls and capes, the designer said. Most spectacular were a procession of flowery dresses – not floral in the traditional sense, but larger-than-life flower sculptures made from silk organza. Densely packed petals of rose pink or cornflower blue were furled as close as budded peonies, or scissored at their edges like tightly packed carnations.

Earlier this year, Alexander McQueen opened a lavish new London flagship, four times the size of the previous store, and announced plans to double the number of boutiques worldwide.