“Flocons de Sel” (“Salt Flakes”) challet restaurant located in Megeve resort became the 26th restaurant in France with three Michelin stars. The gastronomic guide lists a total of 4,289 restaurants of which 594 have one to three star ratings. The restaurant’s addition to the Michelin top table still leaves France well behind Japan, which has 32 three-starred restaurants.

“Flocons de Sel” restaurant is the creation of the French chef Emmanuel Renaut who acquired the site of a former pizzeria in 1998 after running a 20-man team at the luxurious Claridges hotel in London. 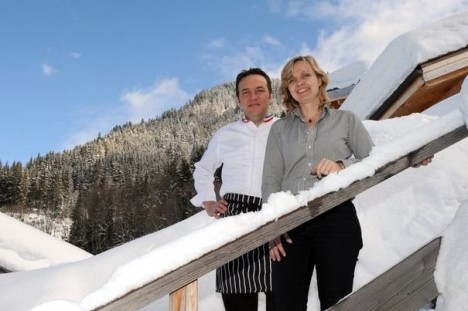 On Flocons de Sel menu you will find “fera” – fish from nearby Lake Geneva, served with a lemon paste and – mountain-inspired specialities like a chilled Alpine milk meringue with orange compote, or colourful one-off inspirations like beetroot gnocchi.

Chef Renaut is treating his guests with a smoked chocolate tart, with wood ice cream — scented with dry-roasted wood instead of vanilla.

“I am trying to follow my instincts, without being polluted by food fashions. Of course I look at what is being done elsewhere, but I want people who eat here to see my personal signature,” he told AFP in a recent interview.
More details: viamichelin