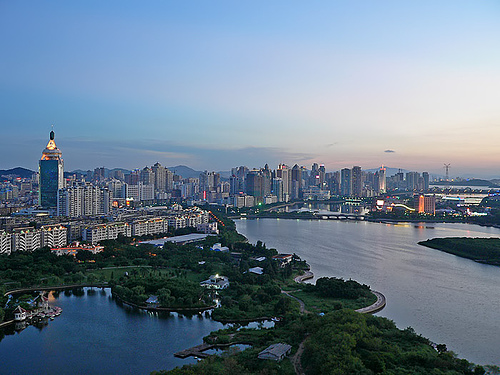 China aims to boost the tourism of its coastal Xiamen city, by building its first large luxury cruise liner. Xiamen is seen as a future shipping hub in southeast China, leading the economic growth of the region.

The Southeast China International Shipping Center package includes 10 projects led by the construction of a 100,000-ton luxury cruise liner, a cruise terminal and a shipping business center in the city of Xiamen, local officials told xinhua.

Building such a large luxury cruise liner will take at least 47 months. Upon completion the liner will be capable of carrying more than 2,000 passengers. According to officials, the superstructure will be operated by a subsidiary of Beijing-based Shan Hai Shu Group, a conglomerate that has a cruise tourism development partnership with U.S.-based Royal Caribbean International.

“With our own cruise liner, it will be easier to design cruise routes and develop our own tourism products,” said Huang Ju, chief operational officer of the subsidiary of Shan Hai Shu.

“In another five years, people arriving in Xiamen on cruises can have as much fun in the ‘Cruise City’ as they do in Las Vegas,” according to local media.

“Cruise travel is becoming the new form of tourism favored by Chinese,” Zheng Weihang, an official with China Communications and Transportation Association, said on a recent cruise forum held in the northern port city of Tianjin.

According to the association, more than 504,500 people left or arrived at Chinese ports on cruises last year. Meanwhile, more than 142 cruise ships sailed from coastal China to international destinations, up 49.5 percent from a year earlier.

In Tianjin alone, industry observers estimate the number of tourists taking cruises could grow by six or seven times in the coming decade.

“Globally, the cruise industry’s market is shifting its focus from the developed world to emerging markets like China,” an industry observer said. “More Chinese are getting to know that a cruise ship is more of a floating five-star resort than a transportation tool.”