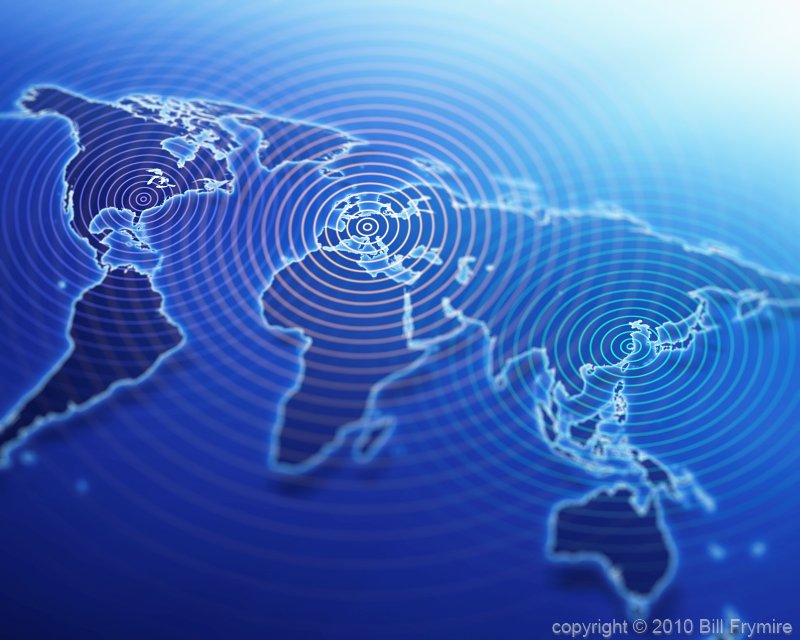 In 2020, emerging markets will dominate the top five largest economies (China, USA, India, Japan and Russia), acording to Euromonitor International‘s analyst insight “Forecast: WORLD’S LARGEST ECONOMIES IN 2020”. The most symbolic shift will be when China overtakes the USA as the largest economy globally, say the authors of the study.

Emerging economies are driving global economic growth but advanced economies will retain a competitive advantage with higher per capita incomes and greater consumer market expenditure, while governments in developing countries face challenges in keeping up with the pace of economic growth.

Euromonitor predicts that the world’s five largest economies in 2020, measured in Purchasing Power Parity terms (PPP) will be: 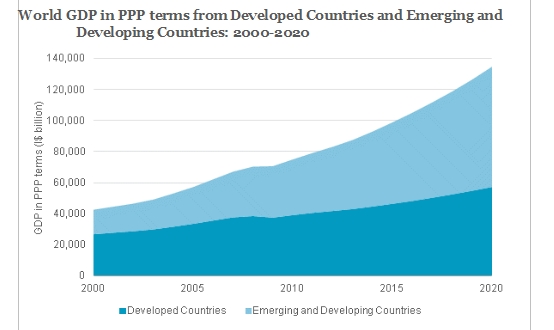 The three biggest emerging economies will account for around 30.0% of global GDP in PPP terms in 2020 compared to 23.5% in 2012 when there were just two emerging markets amongst the five largest economies (1. USA 2. China 3. India 4. Japan 5. Germany). The most discernible shift in global power towards emerging market economies is expected to take place in 2017 when China will become the world’s largest economy.
Euromonitor International‘s forecast have used PPP as this is a method of measuring the relative purchasing power of different countries’ currencies over the same types of goods and services, thus allowing a more accurate comparison of living standards. PPP allows for exchange rates to adjust so that different price levels are eliminated. In terms of analysing the size of economies around the world, it allows for a more accurate comparison.
As emerging market economies expand, standards of living will improve, poverty declines, and real incomes generally rise, with a corresponding expansion of the global middle class. This will have tremendous implications for global consumer market development:

This contrast means that consumer goods companies and marketers will need to target advanced economies and developing countries with varying strategies and even through alteration in products or services to take into account local purchasing power capabilities. As the middle class grows in developing markets, there will be a greater propensity for discretionary spending outside of the essential categories of food and housing. Yet poverty and low incomes will remain widespread in some countries, so businesses should also consider the “bottom of the pyramid” market. In Indonesia, for example, in 2012 there were 36.7 million households with a disposable income less than US$7,500 – equivalent to almost 60% of households. 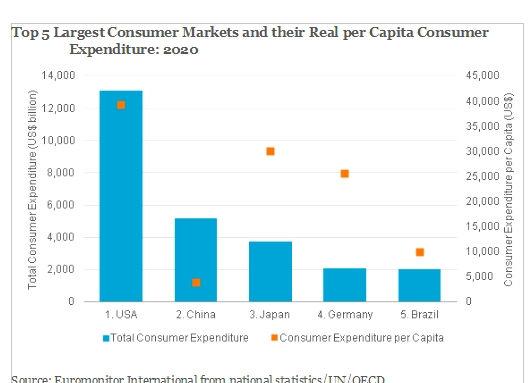 There remain many obstacles to economic growth in emerging and developing countries:Although they can benefit from young and growing populations, this is only an asset if the government or the pace of economic development and reform can keep up with job demand, otherwise it can equally end up being a source of problems and discontent, as seen most recently in the Arab Spring;

Infrastructure deficits are a hindrance for business environments in developing countries both in terms of obstructing
the ease of the movement of goods and services but also of the labour force. Likewise, a global digital divide persists
with emerging markets lagging behind that of advanced economies in ICT and Internet penetration. Greater investment is
needed to open up access to Internet and telecommunications services, especially in rural or difficult to reach areas;