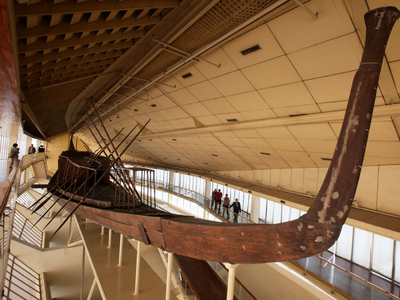 4500-year-old wooden boat found next to the Egyptian pyramids will be restored by a joint Egyptian-Japanese team of archaeologists.  The ancient boat is one of two that were buried next to the Pharaoh Khufu. The boats are believed to have been intended to carry pharaohs into the afterlife.

Khufu, also known as Cheops, is credited with building the Great Pyramid of Giza, the largest of the pyramids. Khufu, son of Snefru, was the second ruler of the 4th Dynasty around 2680 BC and ruled Egypt for 23 years.

Both boats, made from Lebanese cedar and Egyptian acacia trees, were originally discovered in 1954. One of the boats is on display at a museum near the pyramids. The second boat, now undergoing the restoration, remained buried.

Last year in June, a team of scientists lifted the first of 41 limestone slabs, each weighing about 14.5 tonnes, to uncover the pit in which the ancient ship was buried.

At the time, experts said restoration would likely take about four years and that at its completion, the boat would be placed on display at the Solar Boat Museum near the pyramids, which routinely attract millions of tourists and boost one of Egypt’s most important industries.

The team had initially thought the vessel would be safer left underground than exposed to pollution, but evidence showed that pollution, water and insects had invaded the boat’s chamber.