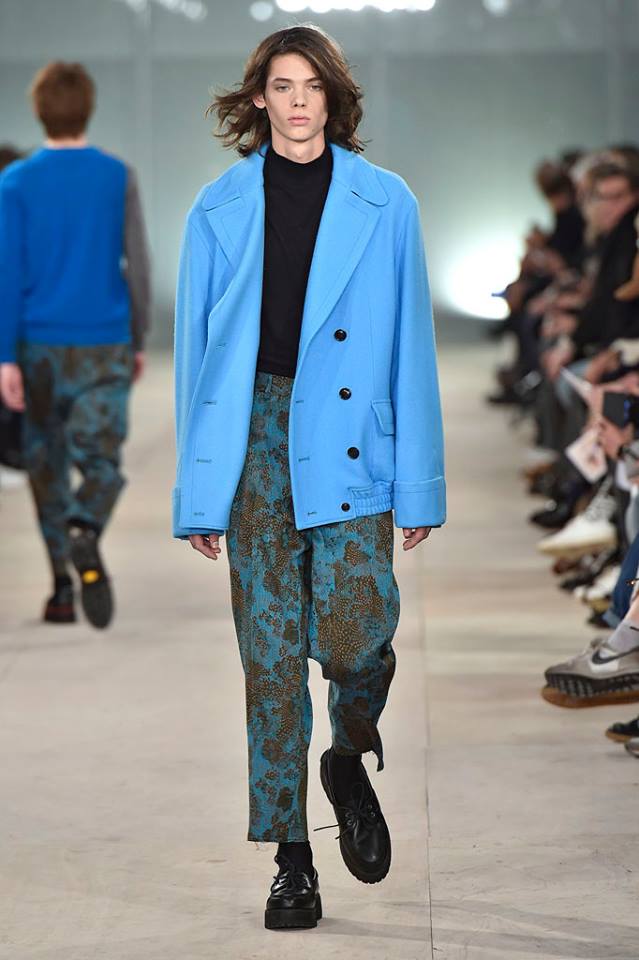 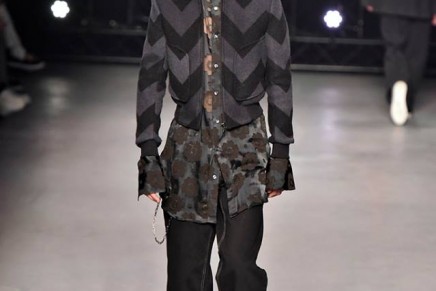 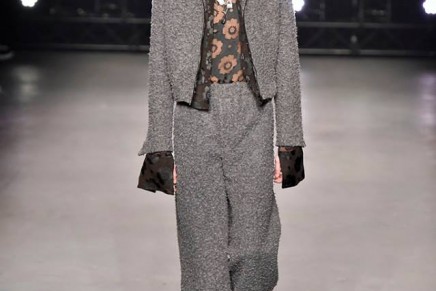 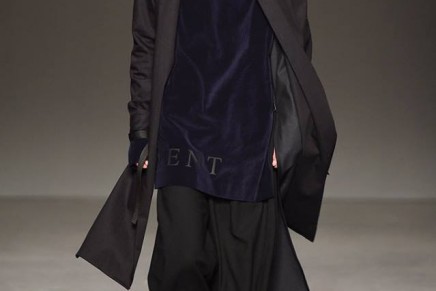 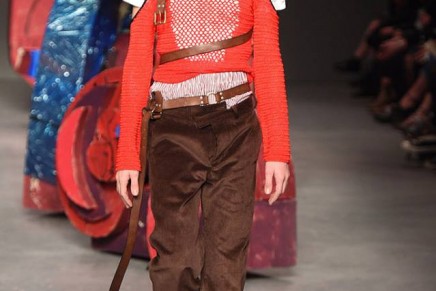 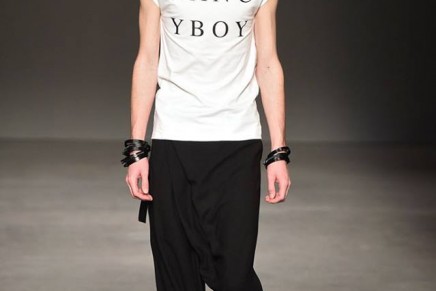 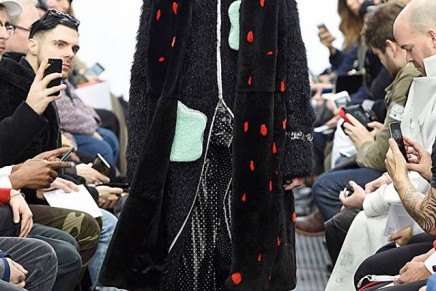 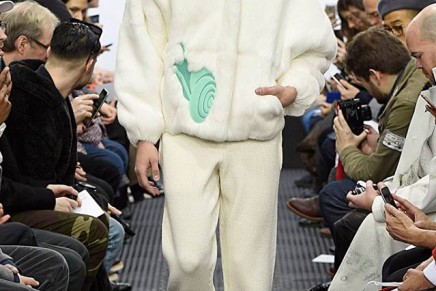 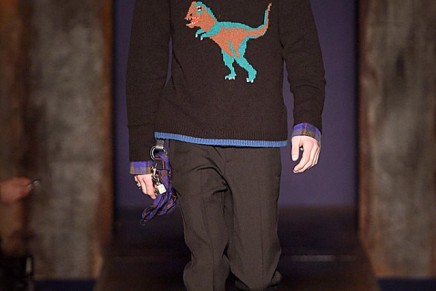 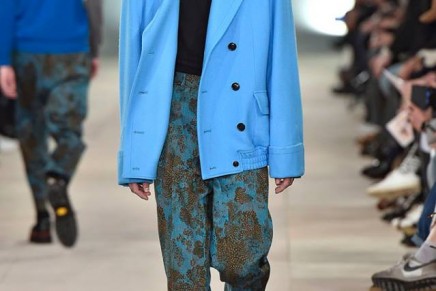 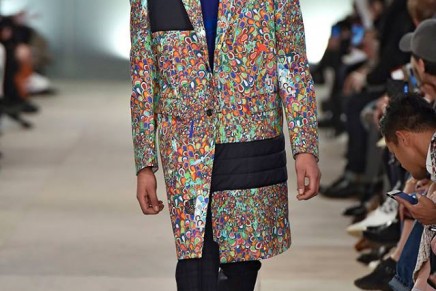 This article titled “Edgy, sporty and with a hint of soul: why luxury ‘ladwear’ is king of the catwalk” was written by Morwenna Ferrier, for The Observer on Saturday 9th January 2016 22.10 UTC

A louche khaki chenille tracksuit paired with elbow-length “oven mittens” summed up the prevailing mood in menswear on Saturday. It was both business as usual for haute streetwear designer Astrid Andersen and proof that “ladwear” is usurping tailoring and eccentricity in the race for dominance of British men’s fashion.

For the past few seasons, there has been a growing divide between two clear camps: peacock and hyper-casual. One is effeminate, an imaginative take on the Brummellian dandy; think last autumn’s leopard print at Topman Design or printed shirts at Burberry. The other is streetwear and its various sub-styles – tracksuits, longline sweaters and textured hoodies. It’s a look Danish designer Andersen has made her trademark for the past four seasons. But only now is it coming out on top, as the weekend’s London Collections Men event has demonstrated.

This season at Cottweiller, there were sweats, tees and minimal tracksuits in neutral tones. Topman Design had neutral hoodies while Nasir Mazhar rolled out an urban Darth Vader in loose skater trousers as well as zip-up, utilitarian waterproof jackets. Patrick Grant at E Tautz, a label which historically leans towards tailoring, was inspired by the roller discos of Grant’s 1980s youth, pairing wide-legged cord trousers with loose-fit macs. Smart lad, if you will.

Danish designer Andersen has been doggedly creating eccentric, heavily logo’d streetwear since 2014, but only now does her taste seem to chime with the norm, as Andersen’s clothes are regularly worn by rappers Drake and the A$AP Mob. This season, her ensemble of loose-fit lace and cotton mix jogging bottoms, two-stripe tracksuits and meatier puffas in restrained shades of blood red and khaki sums up the normalisation of casualwear for men.

“It is casual but I don’t call it casualwear,” she said. “That just boxes it in. I mix the [jogging] bottoms with a longer formal jacket, so it’s both formal and casual. It can be both.”

While this look feels more at home in London than, say, Milan, it’s not specific to the capital. As Adrian Clark, style director of ShortList explained, Walter van Beirendonck, Bernhard Willhelm and Riccardo Tisci at Givenchy had focused on this “very distinctive ghetto-garage sport-luxe look” for years.

From Camden punks to mods to 1990s skater wear, British fashion is well-known for referencing subcultures, so it’s arguably easier to get away with here. A new exhibition, Mad About the Boy, which has opened at London’s Fashion Space Gallery, focuses on the link between catwalk and youth trends: “Dressing patterns have changed,” said Lou Stoppard, editor of SHOWstudio. “These days track pants are as relevant to the working man as they are to a teenager.”

They must be doing something right. British menswear continues to show encouraging growth, with the market expanding by 18% between 2008 and 2013, and now worth £12.9bn a year.

One thought is that this is a reaction to the hyper-feminisation of menswear which is arguably less wearable than, say, a tracksuit. Damien Paul, head of menswear at matchesfashion.com, has seen a spike in this trend: “Luxe sportswear is consistently one of our best-selling categories – and tracksuits continue to be a key style. Astrid Andersen has really nailed the aesthetic – in only a short time she’s developed an incredibly clear idea of who her man is.”

This “man” has thus far been ill-defined: laddy, edgy, a bit sporty but with soul. He cares about his clothes without kowtowing to the mainstream. Clark said: “I think its appeal is that it is the ambiguity of it being one part anti-fashion and one part very avant-garde and niche.” If he can’t fork out for Andersen’s pieces, he can get something more affordable in JD Sports.

One of the most obvious shifts is from slim-fitting to loose, with the much-maligned skinny “hipster” look being phased out in favour of something a little sportier and relaxed. This softer, more casual silhouette, which has so far dominated the catwalks, is in stark contrast to the Yves Saint Laurent-style skinny suits of last season. The focus is less on prints and contrasting colours and more on texture. To wit: Andersen’s standout chenille two-piece tracksuit and the brown corduroy at E Tautz.

“Menswear is definitely moving in a more relaxed and tactile direction,” said Clark. “While I’m a big fan of the skinny silhouette, I’m also really into this more voluminous silhouette coming through.”

Perhaps the main difference is that this street style is less aggressively pitched this time around – last autumn/winter, Christopher Shannon’s now infamous plastic bag embossed collection turned heads but felt a little premature, even at odds with what men would actually be wearing. In the past year, the gap between “terrace wear” (think Stone Island and K-Way jackets along with the usual sportswear suspects) and high fashion has closed. Shops like Urban Outfitters and Asos are selling off-pitch sportswear like Fila, Adidas and Champion alongside its usual raft of new designers. “Oversized T-shirts finishing near to the knees, tanks and board shorts are lining the length and breadth of Oxford street,” said Clark. It’s in keeping with a general shift in what’s cool.

It’s perhaps a little green to start mourning tailoring. “I do think it will take the average man on the street a while to shift from one to the other though, it’s quite a dramatic switch,” continued Clark. As with all things fashion, it will take time for this trend to gravitate fully to the mainstream.