“With our Spring-Summer 2016 couture collection, the Dior woman explores another way of constructing fashion and asserts herself by wearing clothes in a new way. ” Maison Dior 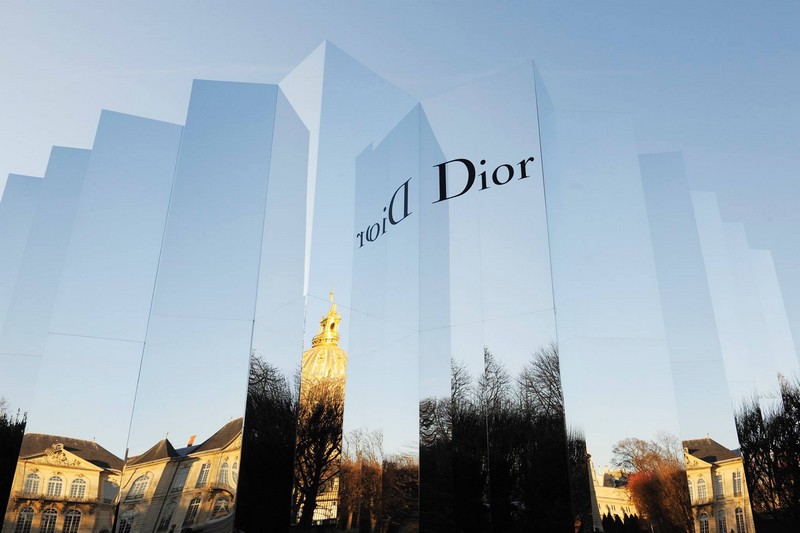 This article titled “Directorless Dior proves it does not do turmoil in classic haute couture show” was written by Jess Cartner-Morley, for The Guardian on Monday 25th January 2016 18.17 UTC

The house of Christian Dior is in turmoil. The unexpected departure of Raf Simons three months ago has left it without a designer, the design studio plunged against its will into an interregnum period, stirring up unhappy memories of the anxious year that followed John Galliano’s scandalous exit in 2011.

Responsibility for this haute couture collection, and for the ready-to-wear collection that will be presented in a month’s time, rest for now on the shoulders of the design team – a thankless task, as the audience out front gossip endlessly about which star designer is about to sign a contract.

Not that you would know any of this from Monday afternoon’s show in Paris. The haute couture shows are about brand image as much as made-to-measure dresses, and the Christian Dior brand simply does not do turmoil.

Related: Dior & the rise of the in-house design team

Dior stands, on the contrary, for serenity. From the wedding-cake white packaging, to the Alice in Wonderland oversized D in Dior and the heritage of exaggerated, dreamlike hourglass shapes of the New Look, the house represents a fantasy of swan-like, unruffled femininity.

As in most recent seasons, the show was held in a giant mirrored box in the gardens of the Musée Rodin. The mirrored box is a visual conceit that borrows something from the concept of a country house ha-ha. Where a ha-ha would trick those looking out of the drawing room windows into thinking that the lawn ran unbroken to the horizon, the mirrored box gives the illusion of another Musée Rodin – this time, Picasso-fractured – at the end of the gardens.

Inside there was, as ever, a maze of seating, hundreds of startlingly overdressed women, and a full-throttle army of paparazzi. Only the frenzied gossiping of the audience as they discussed the latest Dior-related rumour doing the rounds – that Sarah Burton of Alexander McQueen will take over at Dior later this year – disturbed the air of business as usual.

The show began, and it became clear that while Simons may no longer be at the fashion house, the modern Dior ideal that he sketched out during his four years is very much still present. This makes sense, since the collection was designed by a duo of senior designers while Simons was in the job. The sheer number of collections and creative campaigns produced by a house on the scale of Dior means that an artistic director will delegate a good deal of the designing, or oversee with a light touch.

The Swiss designers currently in charge of Dior, Serge Ruffieux, 41, and Lucie Meier, 32, took a bow together at the end of the show, before welcoming the other members of the design team on to the catwalk to share the applause. Ruffieux has worked at Dior since 2008, and was promoted to head designer when Simons became artistic director in 2012. Meier worked at Louis Vuitton and Balenciaga before joining Dior.

The collection showed that Simons’ vision for Dior is their vision too. The colours – navy, black, shots of mustard and electric brights – remained recognisable, as did the structured necklines that left shoulders bare, and the long, lean lines of the skirts. The oversized bar blazers, worn open over cocktail dresses, were an idea glimpsed in the previous couture collection. The boxy, perversely sexy bodices with their origami-folds of stiff, tailored fabric were reminiscent of Simons’ very first haute couture collection for the house.

The show notes made no mention of the absence of an artistic director. Where Simons liked to download his own thought processes into his shownotes, explaining his influences and messages for the season, this season’s pronouncement focussed instead on the heritage of Monsieur Dior himself and his eternal muse, “the spontaneous, relaxed Parisienne”.