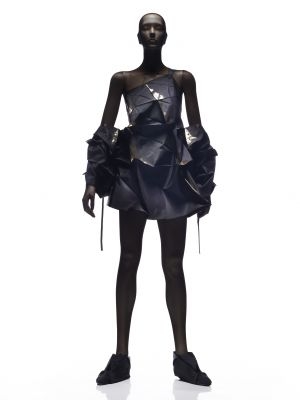 Japanese designer Issey Miyake received the ‘design Oscars’ at London’s Design Museum Awards for his Origami-style 132 5. eco-fashion collection. Issey Miyake’s dresses are made out of recyclable materials such as polyester processed from plastic bottles. Mixed-use garments, shirts, jackets, skirt, or dresses can be worn as variable elements.

The clothing is first designed using a program that generates 3D shapes from a single sheet of paper. It’s this multidisciplinary process, in fact, that lends the collection its name.

The name 132.5 refers to the process of development: the number “1” refers to a single piece of cloth, “3” refers to its three -dimensional shape. the following “2” comes from the fact the a 3d piece of material is folded into a two-dimensional shape, and the “5” separated by a single space refers to the time between when the folded forms are made and people actually put them on, giving birth to clothing. the numeral “5” also signifies their hope that this idea will have many other permutations.

The Design Museum’s Design Awards, ‘the Oscars of the design world’, showcase the most innovative and progressive designs from around the world, spanning seven categories: Architecture, Digital, Fashion, Furniture, Graphics, Product and Transport.

On 24 April at the awards ceremony, British studio Barber Osgerby were awarded the overall Design of the Year for their stunning design of the London 2012 Olympic Torch.