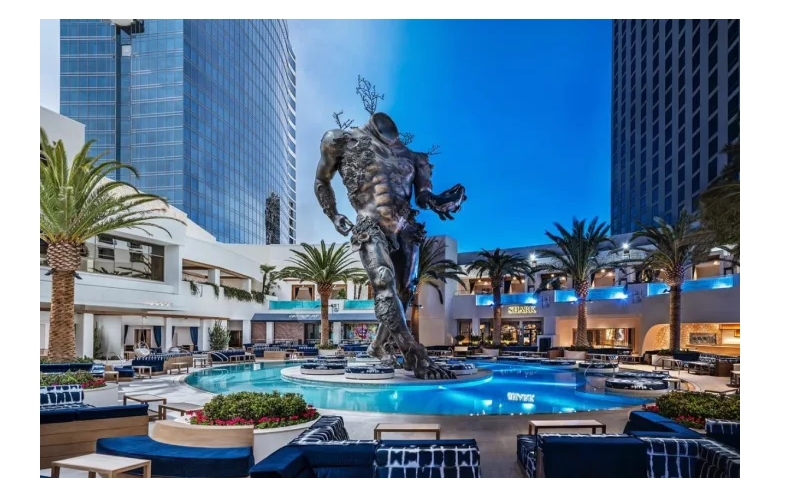 When Damien Hirst’s loved and loathed Treasures from the Wreck of the Unbelievable was unveiled in Venice in 2017, the show – his first major exhibition in 13 years – was likened to “Elvis coming back to play in Las Vegas”.

Now, one of the most imposing works of that polarizing exhibition has been unveiled as the centerpiece of a very different spectacle – a pool/club at the Palms Casino Resort in Nevada’s sin city.

The 60ft-tall, headless bronze statue Demon With Bowl is part of Kaos, the hotel’s new “73,000-sq-ft dayclub and 29,000-sq-ft nightclub” , which opened las week with performances by Cardi B and J Balvin among others. Promotional materials say it “boasts the highest number of pools of any resort in North America”.

It is also part of the British artist’s wider work with the hotel for its $620m renovation, which is something of a Hirst takeover, though it does also display works by Andy Warhol, Jean-Michel Basquiat and contemporary Brooklyn artist KAWS.

Hirst designed the resort’s Unknown bar, which features his 1999 work The Unknown (Explored, Explained, Exploded) – otherwise known as a ferocious-looking shark chopped into pieces and suspended in formaldehyde. Revellers at the Kaos club will reportedly be the first to see the original bronze Demon, which was apparently substituted with a resin copy in Venice due to weight restrictions.

And in addition to the dozens of other Hirst pieces around the property, he has also masterminded the so-called Empathy Suite, complete with not one but two massage rooms and a “cantilevered pool overlooking the Las Vegas strip”. Is it a room or an art piece, the hotel’s website asks.

Inside the 9,000 sq ft two-story suite, guests find echoes of many of Hirst’s recurring motifs – prescription pills, suspended sea predators, skulls and butterflies – and six large scale works commissioned especially for the rooms including a cabinet of symmetrically lined cubic zirconia called The Winner Takes It All and twin Marlins in a piece called Here for a Good Time Not a Long Time, which sounds a lot like any trip to Vegas.

“I love what Frank and Lorenzo Fertitta have done with the Palms,” Hirst said of the billionaire brothers, casino owners and art collectors in promotional material. “They’ve allowed me to create a suite in the hotel, design everything and completely fill it with my art.”

The cost comes in at $100,000 a night with a two-night minimum stay, or otherwise reserved for gamblers with at least $1m in credit at the casino.

Aside from the art, the suite also has a 13-seat bar, 24-hour butler service, chauffeured car service, $10,000 credit at the resort and, most importantly for the person who might actually stay here, “lounge areas to accommodate up to 52 of your closest friends”. Because much like purchasing an absurdly expensive piece of art, what good is laying out the cash for a room like this if you can’t show it off?