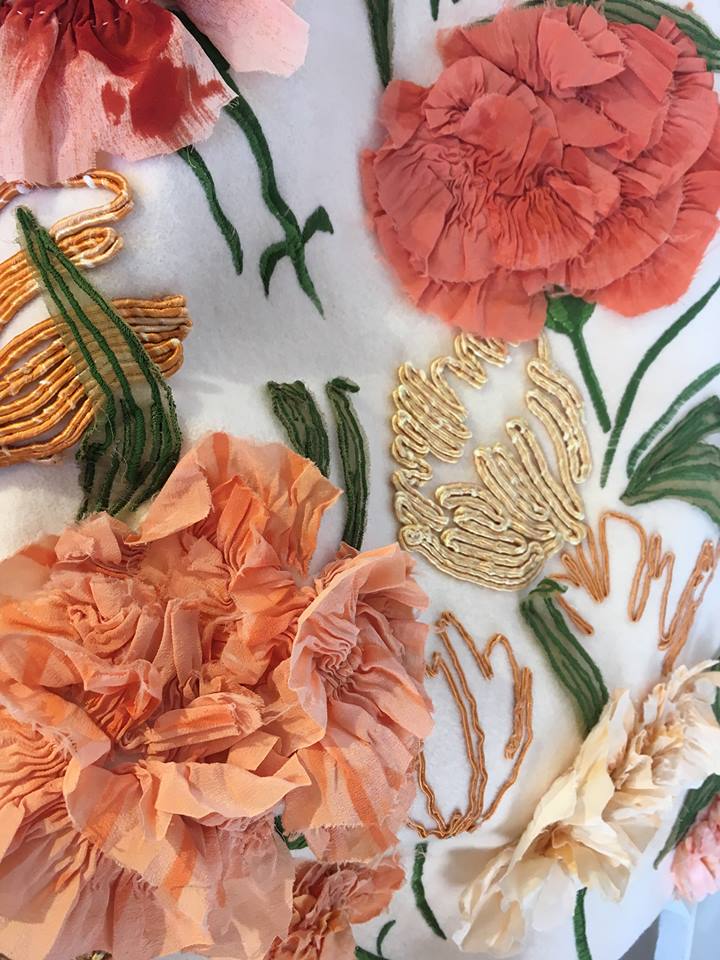 This article titled “Craft Werk: Meet the maestros of the fashion industry” was written by Scarlett Conlon, for theguardian.com on Thursday 10th May 2018 16.26 UTC

Is craft the new black? Yes, if the line-up of participants of London Craft Week – which kicked off in the capital yesterday – is anything to go by. The five-day event features several influential fashion names including Loewe, Mulberry, Christian Louboutin, Le Kilt, Alice Archer, Gieves & Hawkes and Delpozo. All are taking part in workshops, exhibitions and events that aim to make the link between craft and fashion a strong one.

And why wouldn’t they? In the past five years, craft has become really cool in fashion. Chanel’s autumn/winter 2016 couture show was dedicated to the women who craft the collections, known as the “petit mains”; brands which prioritise the local artisan – such as Hiut Jeans, which reinvigorated the town of Cardigan by setting up its business there – have been hailed as examples to follow. Meanwhile, fashion influencers are giving equal importance to timeless objects – such as glassware and ceramics – as they are the latest fashion trend. The creative director Alex Eagle, for example, sells hand-embroidered shoes alongside hand-thrown tableware by ceramicist Nicola Easton, while Laura Jackson’s forthcoming collection for Habitat in June features what she calls “a Wes Anderson jug – it’s massive and half red, half pink!”

Collectively, it has been firmly put on the fashion industry’s agenda – and no brand has done more to plug the gap in the mainstream conscious than Loewe, the go-to luxury fashion label for purposeful pieces that have an artistic twist. Its annual Craft prize, which was set up by its creative director Jonathan Anderson in 2013, celebrates and supports international artisans who “demonstrate an exceptional ability to create objects of superior aesthetic value” in disciplines including ceramics, bookbinding, jewellery, leather, textiles, metal and wood. It awards €50,000 (£44,100) to the winner.

“It’s about being associated with something – that’s the biggest thing we have culturally at the moment, trying to define ourselves not through image, but with a skill,” says Anderson. “When I joined Loewe, I wanted to set this prize up because I would be in the factory and see people who work in my team sit there painstakingly making bags – I mean hours and hours – and we forget that. We have teams of craftspeople refining and refining … the hours that goes into making a bag is crazy. I thought: ‘How can I do something which I love and shed light on things that should have more light on it?’ While we are engulfed in communication and imagery, there [remains] something in humanity that makes us want to touch and thats what craft is about.”

Last week, the 2018 prize shed light on Jennifer Lee, the London-based ceramicist from Aberdeenshire who has developed a unique method of colouring her clay by mixing it with metallic oxides. Lee observes the increased interest in her craft in recent years as bittersweet. “It suddenly is cool, but so bizarre, too, because all these art schools are closing their ceramics departments which is awful. At Camberwell [College of Arts], for example, where some of the most incredible makers have come through, there’s no longer a specific ceramics department because funding has been cut.”

At Mulberry, which is hosting demonstrations of how its leather goods are handmade in its London flagship, an apprenticeship programme was established in 2006 to preserve the skill set that is at risk of being lost from such spending cuts.

“We feel the responsibility to educate new generations about the beauty of making to nurture the talent of the people that will be driving the fashion and luxury industry in the future,” says its creative director Johnny Coca. “The programme is one of the reasons why I wanted to join Mulberry. It’s incredibly important; if we hadn’t started it [when we did], we would have been at risk of losing our workforce in the years to come. We have a commitment to be manufacturing most of our leathers goods in the UK and this scheme is crucial to keep building our future heritage.”

If honouring craft is crucial to maintaining a fashion workforce, its current renaissance can also be attributed to the current rhetoric surrounding sustainability, says Samantha Roach, founder and designer at London fashion week favourite Le Kilt.

“Young people in particular seem much more interested in the provenance of their clothing. They want to understand how their clothes are made and who has made them,” she says. Traditional craftsmanship is at the heart of Roach’s brand, which is running workshops over LCW in collaboration with the textile design consultancy Norn, to help educate attendees on artisanal craft techniques. It also has a current exhibition, Innovation Through Tradition, at the Michael Hoppen Gallery.

“We want our customers to understand the value in an item of clothing that has its own personal story through repair, provenance and DIY touches,” says Roach. “For example, we have unravelled discarded tartan fabrics and used the yarns to weave into patches, therefore ensuring nothing goes to waste. Subculture has always been an important reference point, and we see craft as a form of anti-consumerism – it’s our own statement against disposable fashion. By educating people on the impact that clothing production has on the environment, we hope it will encourage people to invest their garments.”

Craft does not, however, equate only to something handmade in the fashion landscape. It can incorporate specialist digital processes too, says the fashion designer Alice Archer, whose brand is famous for its intricate embroidery.
“When I was a student, I learned how to hand-embroider and I worked for years as a hand-embroiderer, practising the skill. Now in my collections, I use digital embroidery like it is hand embroidery. I programme every single stitch on my computer, as if I am embroidering it by hand. This gives the embroideries some irregularities and a more emotional and human feeling, while making them infinitely reproducible.”

Archer, who has pieces from her archive on display in the windows of The Place on Brook Street, during LCW also notes the “strong desire for modern takes on craft techniques such as embroidery, smocking, hand painted and printed pieces, and historic detailing” in the luxury fashion industry at the moment. “Clients seek unique products and experiences and want clothing to feel personal – I think … people will invest more money in special pieces that are more timeless and classic and involve special craft processes.”

Anderson agrees: “As a society we are a very romantic people. The romanticism of someone wearing a basket or making something is an inspiration. As a designer, I get more inspiration from doing [the Loewe Prize] that fuels what I do [than anything else]. I think if we have to encourage the next generation and this is what it’s about.”