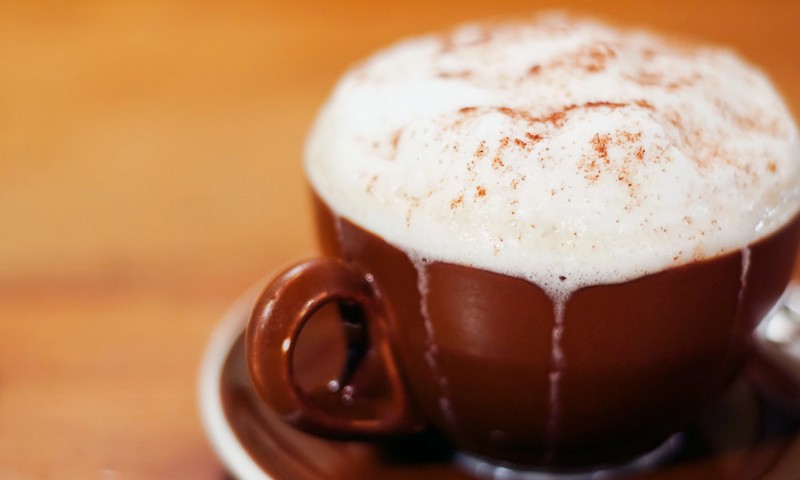 This article titled “Chai latte: the all-conquering beverage causing a storm in a coffee cup” was written by Emine Saner, for theguardian.com on Friday 19th February 2016 13.02 UTC

On the morning we talk, Krishnendu Ray, associate professor of food studies at New York University’s Steinhardt school, bought a chai latte from his local Starbucks. He wasn’t overly impressed. “It was very sweet and cloying,” he says. What this cup of warm, spiced milk – somewhere between a drink and a pudding – highlighted was how the western world takes something from a different culture and changes it. Usually for the worst.

The chai Ray had grown up drinking in India was less sweet, more delicate. “You would have some spices, like ginger in northern India, especially in the winter, or cardamom. Sometimes fennel, sometimes cloves. But I have never had tea in India with all those spices mixed together.”

What has happened to chai – which is sold as chai latte in the big coffee chains and made with flavoured syrup or powder mixed with steamed milk – in the west is “what has also happened to Indian food”, says Ray, author of The Migrant’s Table. “I personally find it aggressively spiced, too many things going on. I think in the imagination, ‘Indian-ness’ has become a caricature. It’s the west looking at India and seeing a reflection of its own hunger for exoticism, and when you do that there is always an exaggeration of the differentiating elements, in this case spice and heat. Chai latte fits into that category, a clutter of spices.”

Related: The cafes serving drinks with 25 teaspoons of sugar per cup

The chai latte has been one of the hot drinks under scrutiny this week after a study by the Action on Sugar campaign group found that examples of the drink from some of the biggest chains were packed with sugar: Costa’s largest chai latte has 20 teaspoons, Starbucks’ has 13 and Caffe Nero’s has eight. Although there are drinks that fared even worse – such as Starbucks’ hot mulled fruit beverage, laden with 25 teaspoons of sugar – it’s the chai latte that has become a minor phenomenon. It is reportedly several Kardashians’ Starbucks drink of choice (if you care about things like that – and lots of people do). People post photographs of it on Twitter and Instagram. Starbucks launched an Oprah Winfrey-branded chai latte. It has become shorthand for a kind of metropolitan, elite coffee-shop frequenter – a “bunch of chai latte-drinking Guardian-reading hippies”, as one satirical essay pretending to have been written by Daily Mail editor Paul Dacre put it.

Chai is not, of course, a recent invention, but for all that it seems to be an import from US coffee chains, it could be considered a British one. In the late 19th century, the British established tea plantations in India, and in the early 20th century they aggressively marketed tea to Indians. “Tea was given away often for free in factories and in some ways a market was created,” says Ray. “In fact, Gandhi was quite irate about Indians drinking tea because he thought it was a very colonial practice. But after the second world war, it is so normal that most Indians have forgotten that it was a British invention and it has become a quintessential Indian drink. In terms of a social lubricant, it was one thing you were always offered. And because it is boiled, it was very safe to drink.”

There remains a class division, he says, in how Indians take their tea. The Indian elite tend to drink “expensive leaf tea, lightly steeped in hot water with no milk or sugar, but for the poor and working class [chai] means tea, sugar and milk”. The milk provides affordable nutrition and keeps hunger at bay, while the sugar provides energy for often tough manual labour. Spices are added to make masala chai and are believed to have medicinal value. Ray is bemused that what a Starbucks customer would recognise as a chai latte is, in India, made and sold by street vendors and is “mostly a working class drink, off the street anywhere in northern, eastern and western India. But it gets associated with professional, cosmopolitan tastes in the west.”

The history of chai latte in the west could be traced back to the 1960s, in a small way, when travellers returning from the hippy trail brought it back with them. But it wasn’t until the 1990s, when Starbucks launched its version, that it started becoming popular. (Neither Starbucks nor Costa would confirm when they actually introduced their chai lattes, or how many they sell.) Paul Williams, a former Starbucks brand and marketing manager, remembers discussions about whether to call it a “latte” rather than a tea, because “latte” would confuse coffee drinkers. “Starbucks is often labelled as an innovator, but really what they do is take niche products and take them mainstream,” he says.

The chai latte arrived in the UK a bit later. Jeffrey Young, managing director of the consultancy Allegra Group and a coffee market specialist, remembers being interviewed about the drink by the BBC about 15 years ago – the interviewer kept pronouncing it “shy” latte. “It’s not new, but we are seeing increasing interest in specialty teas and you could put chai latte in that category,” says Young. “It’s been an ongoing rising trend. There are companies making their own chai mixtures, so it is becoming more premium as well.” A report for Mintel found that global chai latte product launches (for home drinkers) in the year to September 2015 had increased by 20%, with most marketed to young women.

There isn’t a huge profit in them for the coffee shops, says Young. “Milk-based beverages are less profitable than, say, black coffee or tea with a tea bag and a splash of milk. Milk is an expensive commodity … The main appeal for coffee chains is reaching a broader audience. Not everyone drinks coffee.” Or if they do, they might not want to drink it all day – the chai latte has become a indulgent treat. “You can’t stay static so innovation is really important,” Young says. “The operators are looking for innovation points and put [flavoured lattes] on the menu because it’s an alternative. It has been led by the likes of Starbucks, which is the innovator in the coffee chain market. Starbucks has a lot to do with these global trends.”

There is a remarkable idea that only a small proportion of people who drink coffee actually think it’s nice. A Mintel study (this was of coffee drinkers at home, but it wouldn’t be unreasonable to assume it’s a similar story for people who buy cups when they’re out) found that just 29% liked the flavour of ground coffee, and only 37% liked instant yet they still drank it. Of those who went to coffee shops, nearly half were more likely to go to chains that allowed them to customise their coffee. Flavoured syrups are popular: 35% of customers like having them added to bought coffee, but this rises to 57% among 16- to 24-year-olds. So we’re in the baffling situation where lots of us buy coffee, but it appears that not that many of us actually enjoy drinking it – the proper stuff, anyway.

Which presumably explains why we have flavoured syrups and lattes that either contain very little coffee, such as Starbucks’ famous seasonal pumpkin spice latte, or in the case of the chai latte, no coffee at all. “They don’t have latte coffees in Italy – they’d think you were mad for wanting one,” says food writer Tim Hayward. Is there something infantilising about a chai tea latte, as they are sometimes tautologically called? Chai basically means tea, and even the translation of its name – “tea tea milk” – sounds like something a toddler would demand. “To me, most of the high street coffee is infantilising in itself, in the sense that you have a coffee that is predominantly warm milk,” says Hayward. “Coffee is as much about smell as taste. It tastes bitter, but it’s the smell that makes it delicious. And you don’t smell coffee when you drink through a plastic sippy cup. The coffee itself is carefully managed so you don’t get too much bitterness. If it’s not bitter and it doesn’t smell of coffee, you’re effectively just drinking a milkshake. Most of the lattes leave me totally cold.”

Peter Dore-Smith, owner of the well-respected coffee shop Kaffeine, agrees. He doesn’t serve chai lattes and says there isn’t the demand from his customers – he only gets four or five requests a month for one. Were he to put them on his menu, he says “it [would] – I hope this is the right word – diminish my reputation, I think. Chai latte doesn’t match the quality I want to have.”

But other serious coffee shops do serve the drink. Andrew Tolley, founder of Taylor St Baristas, developed his chai latte back in 2006. (In Australia, where he is from, he says the chai latte has been established for at least a couple of decades.) “I spent about six months trying to get the chai spice mixture right and a way to make it that wouldn’t involve any thickeners or different agents – at the time, a lot of companies were making powders and they had a whole load of anti-caking agents and flavourings. I spent a long time thinking about it and, as a result, I’m a fan,” he says.

Related: Brew do you think you are? Why tea needs to copy coffee in order to survive

Born Probably some time around the early 20th century

Career Pushed by British colonial tea plantation owners in India, chai was widely adopted in the 20th century. Probably made it to the west in the 1960s and was introduced by Starbucks in the 1990s as a “chai tea latte”. Came to the UK in the early 2000s. In 2015, there was 20% growth in the launch of chai latte products to be consumed at home.

High point Being declared an obsession by Khloe Kardashian: “I love to get a Venti seven pump no water chai latte”

Low point Being declared an obsession by Khloe Kardashian

What it says “We are going to elevate the tea experience in the same way we did for coffee” – Howard Schultz, CEO of Starbucks

What they say “These hot flavoured drinks should be an occasional treat, not an ‘everyday’ drink” – Kawther Hashem, Action on Sugar